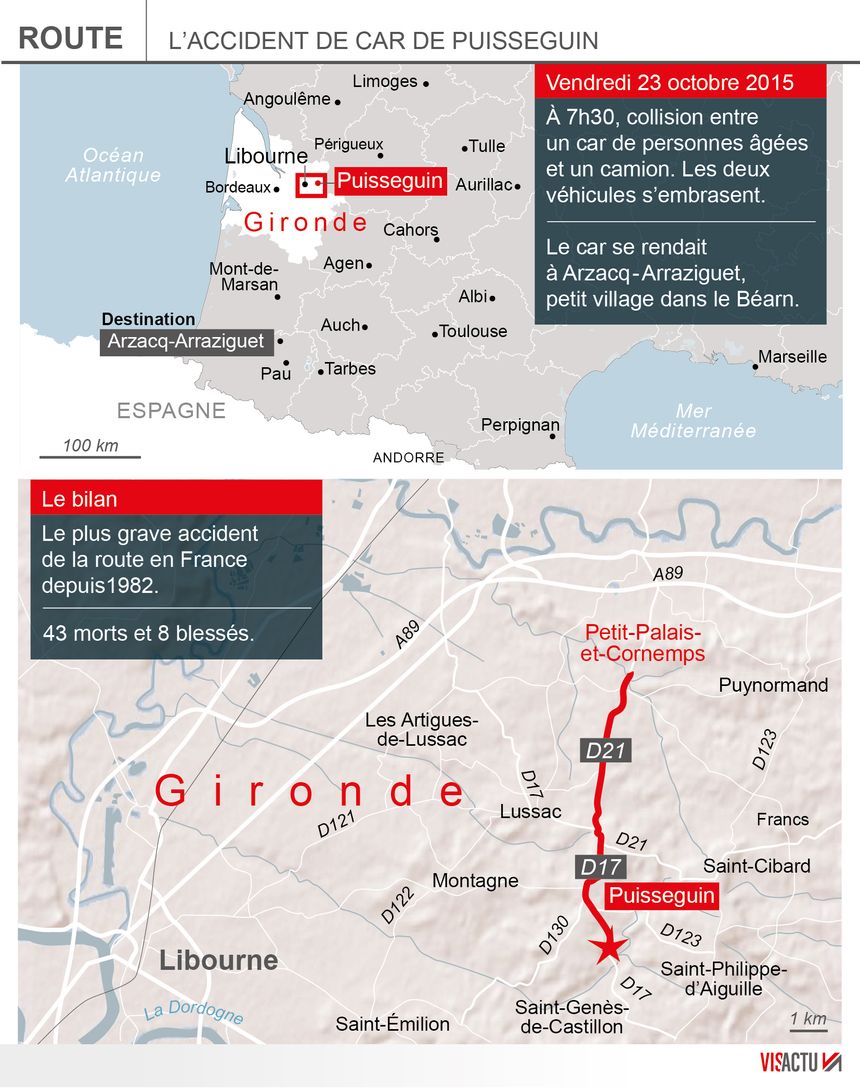 There may never be a “Puisseguin” trial. Six years ago, October 23, 2015, 43 people lost their lives in this terrible collision between a truck and a bus in Puisseguin in the Libournais. We learned this Friday that, on October 14, the investigating judge in charge of the investigation rejected the requests for additional acts from the Libourne prosecutor’s office. The magistrate pronounced a dismissal and closed the file. The victims’ lawyers as well as the Libourne prosecutor’s office appealed.

In January, the Libourne prosecutor’s office had requested additional requisitions hearings and indictments but these requests are therefore rejected. In his order of October 14, the investigating judge considers that only the driver of the truck, who died in the accident of October 23, 2015, could be implicated.

For the victims’ lawyers, justice should have looked into the defects of the semi-trailer as well as the additional tank of the abnormally positioned bus. “The main cause of the accident is the excessive speed of the driver of the truck who lost control of his vehicle but there are other faults : the defect of the semi-trailer and that famous oversized additional tank “ said Antoine Chambolle, lawyer for the victims, to France Bleu Gironde.

We wanted to improve the safety of the buses, nothing happened – Michel Vigier, president of the collective of victims of Puisseguin

Michel Vigier, president of the collective of victims of Puisseguin is not surprised by the dismissal decision but he regrets that the tragedy is not served at least to change safety standards on board buses. “We weren’t trying to systematically find any other culprit than the unfortunate driver of the truck, but the goal was to improve the safety of the coaches and prevent an accident like this from happening again. Nothing. didn’t happen and I think it’s a shame because it could have moved things forward in a smart way. ”

This Saturday, at 5 p.m., the relatives of the victims will go to meditate on the stele of the accident. They will be accompanied by François Hollande, President of the Republic at the time of the tragedy.

Puisseguin drama: the causes of the accident partially identified

One thought on “Puisseguin coach accident: six years after the tragedy, the examining magistrate pronounces the dismissal – France Bleu”