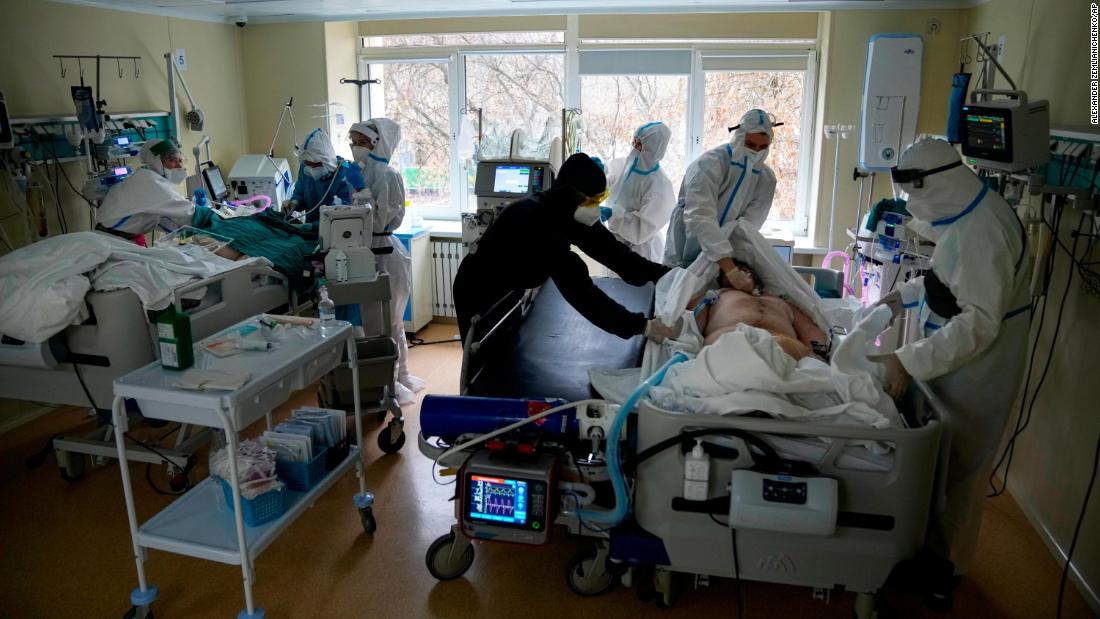 Russia at worst of pandemic despite Sputnik V 0:57

(CNN) – Millions of Russians are facing strict new covid-19 restrictions starting this week, after a slow vaccination campaign, an overwhelmed healthcare system and widespread mistrust in the government combined to plunge the country into its grip. worst health moment since the start of the pandemic.

This Tuesday, the mayor of Moscow ordered all unvaccinated residents over 60 years of age, as well as unvaccinated people “suffering from chronic diseases”, to stay home for four months, until the end of February, while the city faces a growing crisis.

President Vladimir Putin on Wednesday approved a proposal presented by the government to declare non-working days from October 30 to November 7 throughout Russia, in an effort to curb the latest wave of the pandemic. Senior figures in the country have also begun to openly admit that the situation is dire as the Russians head into a bleak winter.

Record of deaths and infections by covid-19

In recent days, Russia has repeatedly reported its highest number of daily cases and deaths, and on Wednesday recorded a record 1,028 official fatalities.

Experts point to an overdue vaccination program and a government communication failure as factors behind the surge, which now threatens to overwhelm hospitals across the nation.

“I think the country is falling into disaster,” Vasily Vlassov, a Russian epidemiologist and former adviser to the World Health Organization (WHO), told CNN.

“I am hopeful that we will soon reach a certain limit beyond which we will not go, but morbidity and mortality are still very high. Hospitals are overwhelmed,” Vlassov said, predicting that deaths would skyrocket even more before let the year end.

There is also concern that Russia’s official figures do not reflect the true magnitude of its public health emergency.

CNN has previously reported out of concern that Russian authorities are not accurately reporting coronavirus death toll. Russia’s counting method does not include part of the deaths in official statistics, stating that people died “with covid-19” but not “from covid-19,” which does not meet WHO recommendations.

Government officials have begun to speak openly about the depth of the crisis. Prime Minister Mikhail Mishustin said at a covid-19 task force meeting on Tuesday that the burden on medical institutions is seriously increasing, while Oryol region governor Andrey Klychkov recently revealed that the region has no ability to hospitalize more coronavirus patients.

“The most terrible figure is that we had 1,854 beds prepared, today there are no more free beds available. Of course, we will free up as many beds as we can, we will look for options. But at the moment there are no beds available, and this raises serious concerns,” he said Klychkov during a live broadcast on Instagram.

Problems in the vaccination campaign

Russia’s efforts to reduce transmission have been seriously hampered by an unconvincing vaccination program. Only 30% of the population is fully vaccinated, in a country where there are four national vaccines available.

Russia has a high rate of skepticism about vaccines, according to multiple polls. An Ipsos survey in May found that vaccination intent among unvaccinated people in 15 countries was the lowest in Russia (41%) and second in the United States (46%). And a study published in September by Levada-Center showed that 52% of Russians were unwilling to get vaccinated.

“The main reason is mistrust in the authorities and the information they release,” Denis Volkov, director of the Levada-Center, a non-governmental sociological research and polling organization, told CNN.

“From the beginning, contradictory information was broadcast through the main channels: some said that you had to be vaccinated, others that it was a fictitious disease,” he said. “There were various conspiracy theories in the state media. There was no clear and coherent message from the government from the beginning.”

Volkov also suggested that an early Russian campaign to promote its own vaccines and disparage foreign ones backfired, instead reinforcing the concerns of many Russians about vaccines in general.

“It is time to put it bluntly: the state has lost the information campaign to combat the coronavirus and explain to the people the need for vaccination,” said Deputy Chairman of the State Duma Pyotr Tolstoy on Saturday.

Russia detects its own covid-19 variants 0:39

“This is a fact: people do not trust the vaccine,” Tolstoy was quoted as saying by state media RIA Novosti.

The Kremlin admits part of the blame

On Tuesday, when the country hit another record for COVID-19 deaths, the Kremlin admitted partial responsibility for low vaccination rates. “Of course, not everything that had to be done was done to inform and explain the inevitability and importance of vaccination,” President Vladimir Putin’s spokesman Dmitry Peskov told reporters.

“But at the same time, the citizens of our country must adopt a more responsible position and get vaccinated,” he added.

Some regions continue to introduce local restrictions based on the severity of the local COVID-19 situation. But, so far, the government has consistently claimed that there is no reason to announce a total lockdown.

“[El gobierno] he’s worried about making people angry, leaving them without bread by shutting down the economy, which will make them even more angry, “political scientist Ekaterina Schulmann told CNN.

“The nation has seen a steady decline in real disposable income since 2014. Support and confidence in presidential power have been on the decline since 2018. It is risky to push people further,” he added.