Tomáš Tatar: At the moment I can’t go to the Olympics – ŠPORT.sk 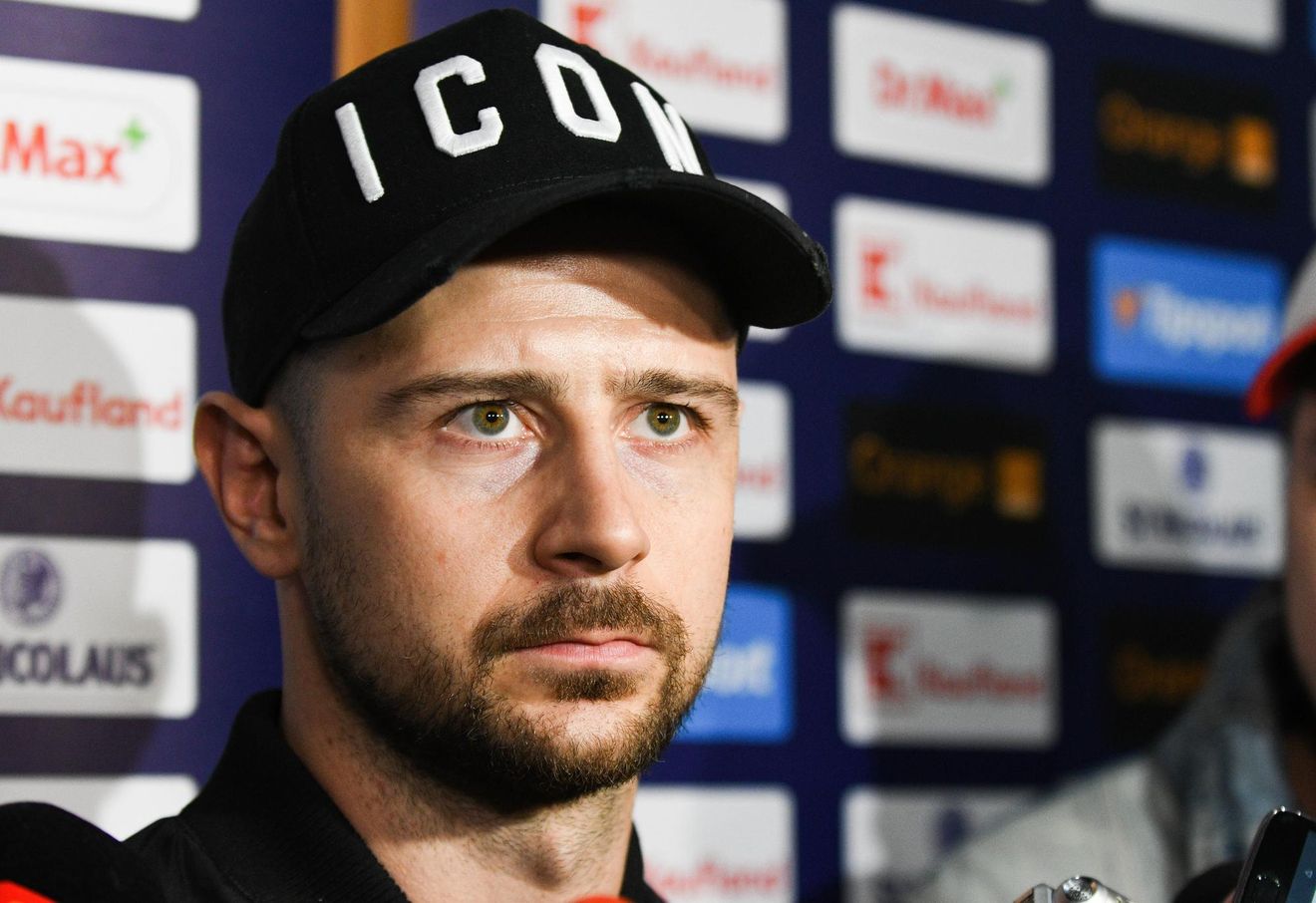 Tomáš Tatar is experiencing a successful start to the season in the New Jersey Devils jersey. We caught him before the night game against Washington. He was pleased that he will also challenge a good friend Martin Fehérváry in the first Capitals team.

Last year took about two years of my life, but I’m having fun with hockey again, says TOMÁŠ TATAR from New Jersey

In Devils, he tries to advise his younger teammates Marián Studenič and Christián Jaroš, who are on the edge of the line-up. The 30-year-old striker should be the leader of the Slovak national team at the February Winter Olympic Games in Beijing. However, he has a problem with US visas, for which he is currently unable to travel from the US.

How satisfied are you with the start of the season?

“It is very good so far. We already had a good camp, I was very surprised by many players. If we work hard, the team has great potential. From my point of view, I also see it positively. Coach Lindy Ruff is very fair in terms of playing time. He divided the formations accordingly. After the first match he told me that he was satisfied and in the second match I played a lot. I’m currently playing hockey. I’m happy with how the coach behaves, which is the difference from the Montreal experience. ”

I am pleased with the sincerity of coach Lindy Ruff. It’s a difference from the Montreal experience.

After signing a $ 9 million two-year contract, you were expected to be in the first two Devils formations. How do you feel you are in third place yet?

“It simply came to our notice then. At the beginning, the coach wanted me to play with Jack Hughes and Yegor Sharangovic, in the end he split it up more. I’m playing very well with Andreas Johnsson and Dawson Mercer. We immediately understood, we were active from the beginning. I’ve already gotten into the first power play formation. ”

With the nineteen-year-old Mercera’s premier goal in the NHL against Seattle, when you made a beautiful pass to him, it looked like you were playing together half the season. What do you say to that?

“Dawson has a high hockey IQ. He’s conscientious, he listens, we talk a lot about how we can improve our game. We communicate well in the defense zone and thanks to that we get from defense to attack in peace. ”

Do you feel like a mentor for Marián Studenič with Christián Jaroš, who started in the first team in the opening match, but in the second duel their coach left them out of the line-up?

“I am trying to encourage them. Both ‘Stud’ and ‘Jarki’ played a great match against Chicago, but our line-up is wide. There are more players for each position. The coach changes it according to who likes him in individual matches. It’s part of the NHL. I hope they both get back on the lineup. I tell them to keep working hard. ”

Jack Hughes was injured, but already at the beginning of the season he showed his great talent with two goals against the Blackhawks. How do you like his performances?

“He’s a great hockey player. He has a huge talent. Experience can take it further. You can already feel more confident in the NHL and more comfortable. ”

It is unfair that you go to the campsite with the fact that the interest in you in the team is not very much, as Richard Pánik experienced at Islanders.

Did you remember how you saw him for the first time as an opponent at the Slovak World Championship in 2019?

“Yes, I reminded him too. He himself explained to me that it was very difficult to jump from junior hockey straight to the world championships. That’s why even moving to the NHL wasn’t easy for him. ”

In addition to you, the arrival of the Canadian national defender Dougie Hamilton was a great reinforcement. What does it mean for a team if a similar back comes, who can handle 25 minutes per match on a regular basis?

“Overall, our defense is great. We have four backs who can play power games. They have a great pass, I play very well with them. Dougie is an experienced defender with many matches. He does everything without mistakes. ”

You can also see on social networks that you enjoy New York. Isn’t the city a little distracting when you need to focus on hockey?

“It is ok for me. I like when I can relax outside of matches and training. New York is close to Jersey City. It’s great, I really like it here. ”

“I haven’t experienced it before, when everything was closed here. When I ask the hosts, they say it is slowly returning to normal. I no longer notice the restrictions. ”

You also meet Jaroslav Janus or Richard Pánik. Were you pleased to have friends in town?

“It’s great, a lot of Slovaks live in New York. Spring is preparing here and Rišo is on Long Island. Nobody is far and we will be happy to meet in the city. ”

How do you perceive the Panik’s situation? At first it looked like he would make it to the first team of the New York Islanders, but eventually he was sent to the farm.

“It’s unfair that you go to the camp with the fact that there is not much interest in you in the team. According to the articles I read, Richard had a very good campsite, but it didn’t help. The seats were already divided and he got into a difficult position. I hope something changes and gets back into the NHL. I keep my fingers crossed for him. ”

Have you already had a chance to meet Zden Chár?

“No, we were not in contact with Zden. He signed the contract later and he doesn’t even like urban life as we younger ones. ”

What do you say to the fact that you have extended your career in the Islanders jersey?

“Zdeno is a reinforcement for every team. His work is exceptional. It’s always good to have a similar leader in the cab. ”

We are talking before the match against Washington, where Martin Fehérváry started in the first defense. You talked about him last year as a defender for the NHL, but he only got a chance now. What do you think about it?

“It’s only a matter of time, you just have to be patient and work on yourself. If you are good, the chance will come. Martin may have taken the place of Zdeno Chara last year. He’s more mature now. He is very willing to work, so it does not surprise me that he started in the NHL. I’m looking forward to it. ”

You probably know how to fit into his two-year wait for the profilig, as you experienced something similar at the beginning of your career in the Detroit Red Wings.

“Yes, it’s like that. Maybe because we were Europeans and didn’t build us on the highest rungs, we had to wait hierarchically. Then it was just about hard work. I would recommend every young guy to go full time at all times, because someone is still looking at him. ”

VACCINATION HAS MADE IT EASIER FOR ME

The NHL has announced that not only four hockey players have been vaccinated against COVID-19. How did the vaccination make the situation easier for you compared to last season?

“It really wasn’t easy when we still had to test and go through a strict protocol last year. Now it is milder thanks to vaccination and the rules are no longer so strict. Things seem to be returning to normal. Last year it was suffering for me to play in front of empty perspectives. Even after the match, we could not go anywhere to sit down. The last year in Montreal took me about two years out of my life. ”

The management of the Slovak national team has published the first three names of the line-up for the Beijing Winter Olympics. Were you surprised that you didn’t fit in with them?

“I don’t know if my place is for sure. I didn’t deal with it anymore. We’ll see how it goes. ”

On the other hand, are you probably looking forward to the Winter Olympics when NHL hockey players perform there after eight years?

“Yes, only things around me have become tangled. I also announced this to Miroslav Šatan. I have a problem with visas. By signing a contract with the Devils later, they did not have time to process all the papers under the covid restrictions. I only received a document on the basis of which I could enter the USA. However, I cannot leave America or Canada without having to go through the embassy when I return. I don’t know how it will be handled. ”

So does diplomacy have to get involved so you can go to Beijing?

“It’s possible, because I have no way to arrange it from here. I can’t just tell the club I’m going to work with the papers. They wouldn’t let me go for the three or four days it takes. I also talked about it at Devils Camp and I don’t know how it will go on. The office told me that in Canada I can only equip where I would go to the embassy, ​​but the club will definitely not let me go in the full season. By not placing me in the national team among the initial three nominated players, they complicated my situation. I don’t even have a way to explain the management in New Jersey. ”

One thought on “Tomáš Tatar: At the moment I can’t go to the Olympics – ŠPORT.sk”