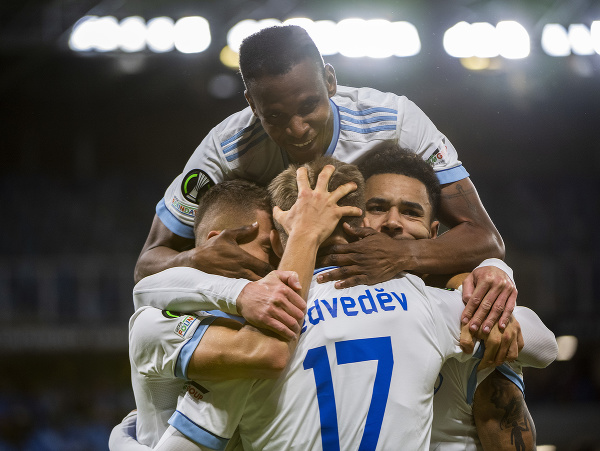 In the picture, Slovana players are enjoying the goal Source: TASR / Jaroslav Novák

BRATISLAVA – Footballers of the Slovak champion Slovan Bratislava won the first victory in the F-group of the European Conference League 2021/2022. On Thursday, they defeated the Lincoln Red Imps from Gibraltar 2: 0. The home team decided to win in the second half, Andre Green opened the scoring in the 46th minute and Ezekiel Henty sealed the result in the 84th minute.

Vladimir Weiss, Slovan coach: “We can play better and we should have played better. We started well, we had pressure, but we have to score a chance from those chances. Then the opponent had a chance. We scored quickly in the second half, but we can be better. I still believed that we will win and that that quality will show. “

Adrián Chovan, goalkeeper of Slovan: “It was a difficult match. We entered it well, we created chances, but we did not score goals. Then the opponent also had some chances. They played well in the block and from our side the end of the first half was weaker. In the second we had a good start again. , we scored a goal and then we got into opportunities. “

Slovan is in 3rd place in the table with four points after three rounds. The leader is the seven-point PAOK Thessaloniki, which won 2: 1 on FC Copenhagen. The second Danes have six points, Lincoln is the last with three losses. The next match will be played by Slovan on November 4 at the Red Imps Stadium (6.45 pm). It will be the fourth mutual confrontation with this opponent this season, in August in the 3rd preliminary round of the European League the “whites” won 3: 1 in Gibraltar and in the retaliation they drew 1: 1.

1 thought on “Weiss was not quite satisfied despite Slovan’s triumph: We can play better and we should have played better – Športky.sk”