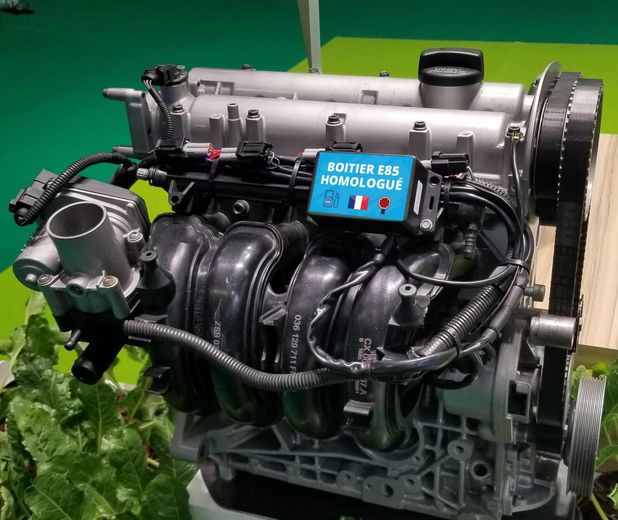 the essential
With a liter of fuel at 0.69 € per liter, superethanol-E85 is the cheapest fuel on the market. What cars can use it? Does it have any drawbacks? Is it sold everywhere? La Dépêche helps you to see clearly.

A liter of fuel at 0.69 €? This price displayed at the gas station may have appealed to you in recent days. Inexpensive and far removed from the surge in unleaded 95, unleaded 98 and diesel fuel. This is the price of superethanol-E85: a fuel composed of bioethanol between 60 and 85% and unleaded petrol 95.

Reading the motorists’ forums devoted to it on the internet, superethanol-E85 has almost only advantages: cheap, less polluting, from French agriculture. The most common drawback: vehicles running on superethanol-E85 consume more.

With soaring fuel prices, superethanol-E85 is on the rise. This is confirmed by David Betton, mechanic in Villematier in Haute-Garonne. Before the price hike, he was building kits to equip vehicles with superethanol on five cars per month. Today, it is fifteen vehicles per month. “The goal of people is first of all to save money. We make a direct saving of one euro per liter. But also to pollute less and to have the Crit’air sticker which will go down. There is no age, employees, young people of 20 years or retirees who want to shorten their fuel budget, “explains the mechanic. For David Betton, “ethanol is the only real solution to be able to have a change of habits on the automobile. A family which has a small budget and which wants to drive clean, it cannot buy a hybrid, it is not. possible, nor an electric one with which you only make 300 terminals “.

At 0.69 € per liter, superethanol-E85 has an unbeatable price. Almost a euro less per liter than super unleaded! This fuel is not imported, it comes from the production of French farmers. And above all, it is not affected by the TICPE (internal consumption tax on energy products), the state tax which lowers the price of the full tank of gasoline.

2 – Which cars can switch to superethanol?

The vast majority of used gasoline vehicles can run on superethanol-E85. The vehicle category must be at least Euro3 (entered into service on January 1, 2001).

3 – How much does it cost to switch to superethanol?

To be able to run on superethanol-E85, it is necessary to install a box in your engine. Four brands of approved boxes exist on the market: FlexFuel, Biomotors, Borel and eFlexFuel. Two models are available depending on the type of injection in your vehicle. They are sold between € 500 and € 800. With the installation, it makes count between 700 € and 1100 € in general. It is necessary to leave your car for one or two days at the garage. An authorized mechanic must install the converter box.

4 – Is superethanol dangerous for the engine?

Opinions differ on this subject. Superethanol-E85 is suspected of accelerating corrosion of engine injectors, fuel pumps or flexible lines in the fuel system, according to manufacturers cited Auto Plus. He is also accused of stripping the tank and therefore cluttering the fuel filter. This is why, according to our colleagues, it would be advisable to change the fuel filter after installing the box and the first three fillings with E85.

5 – Does the car consume more?

A car equipped with ethanol consumes between 15 and 25% more fuel, depending on the model and your driving style. Bioethanol is less “powerful” than conventional gasoline: the engine must inject more into the cylinders to obtain the same explosion. “The calorific value of ethanol is not the same but it pays for itself”, explains garage owner David Betton. Despite this overconsumption, superethanol remains profitable. “Despite overconsumption, we continue to save 700 euros for 13,000 km per year,” explains Nicolas Kurtsoglou, fuel manager at SNPAA (National Union of Agricultural Alcohol Producers).

Unapproved kits are available on the market at very attractive prices. They work, but be careful: equipped vehicles will be refused at technical control and in the event of an accident, the insurance companies may not compensate their customer.

A vehicle that runs on superethanol-E85 emits 70% less CO2 and 90% less fine particles than a conventional gasoline vehicle. He can thus display a Crit’air 0 sticker on his windshield and will be able to drive in ZFE zones (low emission zones) which will be deployed in large cities.

8 – Should I change my registration card?

It is necessary to modify his registration card. It will be marked “FE” (gasoline and superethanol). The gray card is then free except in Brittany and in the Center-Val-de-Loire where it is half price.

9 – Where does superethanol come from?

Superethanol-E85 comes from French agriculture. It is made mainly from sugar beet after fermentation of sugars and starch, wheat, corn and their processing residues.

10 – Are there enough petrol stations?

One thought on “10 questions about superethanol-E85: the fuel that makes driving really cheaper – LaDepeche.fr”