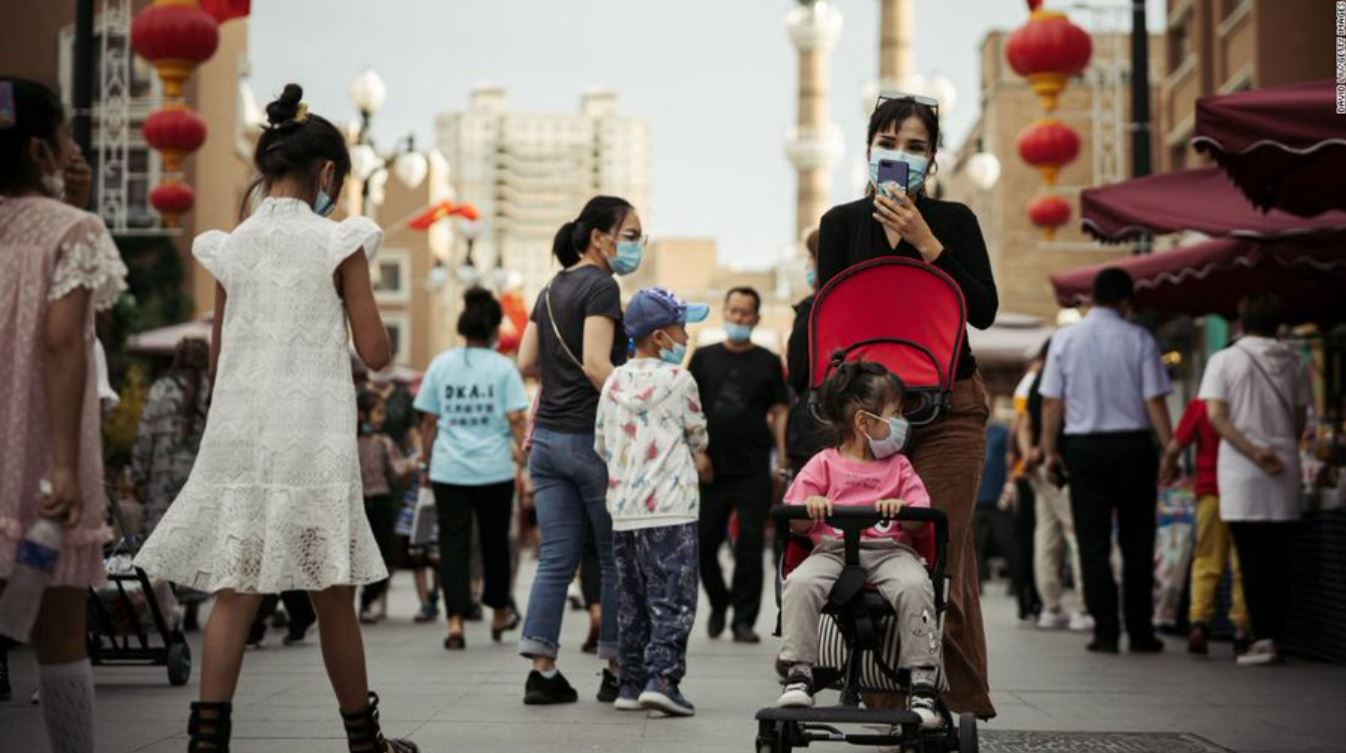 Why now couples in China can have 3 children? 2:31

(CNN) – In an attempt to stem the demographic crisis, China announced this week that it will allow couples to have three children, but some critics wonder why the government is keeping a limit on fathers.

The answer could lie in Beijing’s attitudes towards its ethnic minorities, particularly those located in the Xinjiang region.

Since 2017, the Chinese government has strictly applied its family planning policies to minorities in the far western province, where Beijing is accused of committing genocide against the Muslim-majority Uighur people. The crackdown caused local birth rates to plummet by a third in 2018.

The Chinese government flatly denies the genocide allegations and says that any attempt to limit the Uyghur population falls within the country’s standard birth control policies.

Experts say Beijing is reluctant to remove all quotas on the number of children per family for various reasons. But an important factor is that ending the policy would make it much more difficult to justify Beijing’s attempts to limit the population in Xinjiang and other regions with large minority groups, who often have more children.

China has had severe birth control since 1970. Families were allowed to have only one child, then two were allowed, and now three (Credit: Getty Images)

“Continuing to limit births among populations considered problematic is clearly part of the reasoning,” said Darren Byler, an expert on Xinjiang and a postdoctoral researcher at the University of Colorado.

“If there were not a policy in the whole country, it would be difficult to apply a particular one for the poor and the Muslims.”

Against the trend across China

China’s birth rate has fallen rapidly since the introduction of the one-child policy more than 40 years ago, which limited couples to just one baby in order to alleviate poverty and curb poverty. boom demographic.

The policy managed to limit the birth rate as China developed. But in recent years officials have begun to worry that the country does not have enough young workers to continue to boost its economic growth. The rapid aging of the workforce, awaiting their promised pensions, has only exacerbated these pressures.

Faced with the demographic crisis, the Chinese government relaxed the policy in 2016 to allow two children. But many middle-class couples were reluctant to have more than one child, citing the high costs of raising families especially in cities. In 2020, the birth rate fell by almost 15% year-on-year.

Why now couples in China can have 3 children? 2:31

But while the number of newborns declined across China, the official birth rate remained comparatively high in the western Xinjiang region. Between 1991 and 2017, Xinjiang had a substantially higher birth rate compared to the rest of the country, according to a report from the Australian Institute of Strategic Policy.

Researchers say that for decades Uyghur families in Xinjiang traditionally had many children, sometimes as many as nine or ten.

During the one-child policy, ethnic minorities, including Xinjiang’s Uyghur population, they could have up to three children, which, according to the authorities, was in deference to the group’s cultural traditions of having large families.

Some Uighurs exceeded this figure and in many cases it was tolerated.

Sudden drop in the birth rate

But when the Chinese government began its offensive in Xinjiang in 2017, which allegedly involved sending millions of Uighurs to a vast complex of detention centers, there was a simultaneous tightening of family planning policies.

In a fax sent to CNN in September 2020, the Chinese government He attributed the decline in the birth rate to “the comprehensive implementation of the family planning policy.”

And while the use of IUD contraceptive devices declined in China between 2016 and 2018, Zenz cited documents showing that in Xinjiang it rose to 963 per 100,000 people.

The Uighur women, who have since left Xinjiang, say they were subjected to contraception and forced sterilizations.

In his report, Zenz cited the Chinese government’s official political directives from 2017 that ask administrators to “severely attack behaviors that violate the law. [políticas] family planning. From that year on, minority regions began a “special campaign to control violations of birth control.”

Complaints of Forced Sterilizations in Xinjiang

An ethnic Uighur doctor who fled to Turkey said – in 2020 – that of the 300 exiled Uighur women she examined from Xinjiang, about 80 had been sterilized. Many of them did not even know that they had undergone the procedure.

The Chinese government did not mention minorities, including Uyghurs, in its relaxation of the three-child policy, and authorities have consistently denied allegations of forced contraception and sterilization.

The state media blamed Xinjiang’s high birth rates on religious extremism, and they described the decline in fertility as a victory for women’s rights.

Experts said the rules are unlikely to be relaxed for minorities in the near future.

“If birth restrictions were lifted universally, they would lose their justification for tightening birth control policies against specific sectors of Chinese society that they dislike,” said Carl Minzner, a law professor at Fordham University.

Maintaining birth control in Xinjiang is not the only reason the Chinese government maintains the three-child limit.

Experts say Beijing is reluctant to find new roles for the tens of thousands of people employed by the government to oversee family planning policy.

At the same time, removing the limits would remove one of the many ways the Chinese government can control its population, Byler said, forcing Beijing to find another reason to conduct internal surveillance.

There could also be a very practical reason why the government has maintained its family planning policy regime, even if it has relaxed it slightly.

And it is that Beijing may need to re-toughen the rules in the future.

1 thought on “Why isn’t China completely eliminating birth controls? The answer could lie in Xinjiang”