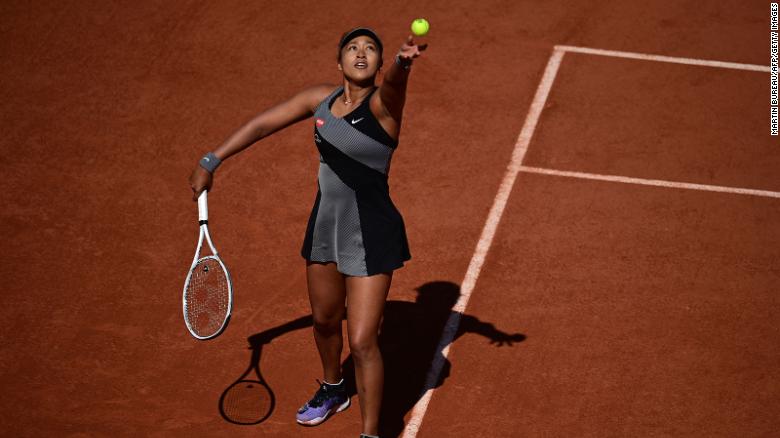 Naomi Osaka says she will be away from the courts for a while 1:33

(CNN) – Tennis star Naomi Osaka announced Monday that withdraws from the French Open after refusing to speak to the media at the Grand Slam.

The four-time Grand Slam winner posted a statement on Twitter saying she was retiring so that “everyone can get back to concentrating on the tennis that takes place in Paris,” adding that “she would take time off the court.”

Osaka revealed that she had “suffered long bouts of depression” since winning her first Grand Slam title in 2018.

Last Wednesday, citing mental health reasons, Osaka posted on social media that he would not participate in any press conferences during the French Open, hoping that any fines he incurred would go to a mental health charity.

Following her victory on Sunday, Osaka was fined $ 15,000 for failing to speak to the media, Roland Garros announced in a statement.

“This is not a situation that I ever imagined or intended when I posted a few days ago,” Osaka said in his statement.

“I think that now the best thing for the tournament, the other players and my well-being is that I retire so that everyone can get back to concentrating on the tennis that takes place in Paris.

“I never wanted to be a distraction and I accept that my moment was not ideal and my message could have been clearer. More importantly, I would never trivialize mental health or use the term lightly.

“The truth is that I have suffered long bouts of depression since the US Open in 2018 and it has been very difficult for me to deal with it.

“Anyone who knows me knows that I am an introvert, and anyone who has seen me at tournaments will notice that I often wear headphones as it helps to calm my social anxiety.

“Although the tennis press has always been kind to me (and I want to especially apologize to all the great journalists I may have hurt), I am not a public speaker by nature and feel great waves of anxiety before speaking to the media of the world.

“I get very nervous and find it stressful to always try to get involved and give the best answers I can. So here in Paris I was already feeling vulnerable and anxious, so I thought it best to take care of myself and skip press conferences.

“I announced it in a preventive way because I feel that the rules are quite out of date in some places and I wanted to highlight that. I wrote privately to the tournament apologizing and saying that I would be more than happy to speak to them after the tournament as the slams are intense.

“I’m going to take time off the pitch now, but when the time is right, I really want to work with the Tour to discuss the ways we can make things better for the players, the press and the fans.”

Criticism of the French Open

Following its decision to exclude itself from media duties last week, the French Open was criticized for posting a tweet, which it has since deleted, with photos of Rafael Nadal, Kei Nishikori, Aryna Sabalenka and Coco Gauff participating in his duties with the media with the caption: “They got the job done.”

Is Naomi Osaka the new queen of tennis? 1:42

I understand your attempt to deliver a message, but this doesn’t look good. I mean these particular players are a great image for tennis, but making a player feel guilty and humiliating her is NOT a good image for a tennis player.

Gilles Moretton, president of the French Tennis Federation, said in a statement that the FFT was “sorry and sorry for Naomi Osaka.”

«The result of Naomi’s withdrawal from Roland-Garros is regrettable. We wish her the best and fastest recovery possible, and we look forward to having Naomi at our Tournament next year, ”Moretton’s statement read. “Like all Grand Slams, the WTA, the ATP and the ITF, we remain highly committed to the well-being of all athletes and to continually improving all aspects of the player experience at our Tournament, including the media. , as we have always strived to achieve. “

“I really hope it’s okay,” Navratilova tweeted. “As athletes, we are taught to take care of our body, and perhaps the mental and emotional aspect is overlooked. This goes beyond offering a press conference or not.

After her victory over Romanian Patricia Maria Tig on Sunday, 23-year-old Osaka did not speak to the media, an action for which she was fined.

Roland Garros said it asked Osaka “to reconsider her position and tried unsuccessfully to talk to her to check on her well-being, understand the details of her problem and what could be done to fix it on the site.”

“Following Naomi Osaka’s lack of commitment, the Australian Open, Roland-Garros, Wimbledon and the US Open wrote to her jointly to check on her well-being and offer her support, underscore her commitment to the well-being of all athletes, and suggest a dialogue on the subject, “said the statement. “He was also reminded of his obligations, the consequences of not complying with them and that the rules should apply equally to all players.”

Organizers said repeated violations could lead to harsher penalties, including suspension from the tournament.

The WTA tour issued a statement saying that mental health and awareness are one of the “highest priorities of the WTA.”

“We are still here to support and assist Naomi in any way possible and we hope to see her back on the court soon,” the WTA statement read.

One thought on “Naomi Osaka withdraws from French Open, citing her mental health”