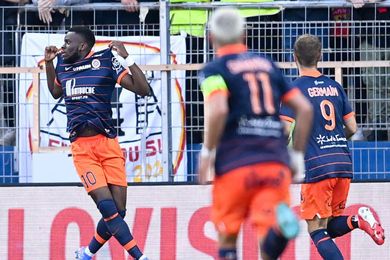 Only one goal was missing! After a first act of great quality and a second equally interesting period, Montpellier knocked down Lens (1-0) this Sunday La Mosson after a spectacular meeting, as part of the 10th day of Ligue 1.

Mavididi opened the scoring upon returning from the locker room.

The runner-up of Paris Saint-Germain has fallen. After two consecutive victories, Racing Club de Lens saw their series end on the lawn of Montpellier (0-1) this Sunday at La Mosson, as part of the 10th day of Ligue 1.

Unknowable for a good part of the meeting, Franck Haise’s men came across a solid and united team from Hrault, and especially a Savanier of great days. Decisive passer on the goal of Mavididi and author of an XXL performance, the former Nmois allows the MHSC to find the tasty taste of victory.

Olivier Dall’Oglio’s men, looking for success in the league since September 12 against Saint-Etienne (2-0), were keen to make the difference quickly. Without success, but they clearly dominated the first act against the Sang et Or. Thanks to their metronome Savanier, so… and Germain: a rather soft strike from the former Marseillais to start, before a good recovery on a center of his captain, who failed on the post!

In the hard until the end of the first period, the Northerners did not take advantage of the break to adjust their tactics. And upon returning from the locker room, Mavididi found the flaw thanks to a sublime deep pass from the inevitable Savanier (1-0, 47th)! Orphan of Delort and Laborde, the former Dijonnais took responsibility and did not tremble in front of Leca. Clauss, Kalimuendo and Costa tried to answer him in the crowd, but in vain: either Omlin read the trajectory or the latter fled the frame.

Only Fofana seemed capable of making the difference for RCL, but the one who has impressed L1 since the start of the season has come up against an iron defense, led by a good Sakho. Solid behind, Montpellier was also ahead, as evidenced by this pretty head shot signed Germain, which could have hit the mark. Or this last opportunity of Mavididi, close to doubling.

At the end of the match, while the RCL was pushing – with a head of Jean that made La Mosson tremble – Ferri finally saw red for two yellow cards! And, fortunately for him, his teammates managed to hold the score despite many Lensoise chances, all annihilated by Omlin. It is there, the reference match of Montpellier, while Lens marks a stop.

A very good Ligue 1 meeting! No goal the break, but 18 shots, and about forty at the end of the match. There was only one goal missing, and Mavididi scored it. In the end, a more than pleasant match on the part of the two teams, who did not spare their efforts for 90 minutes.

– Savanier perfectly launches Mavididi in depth. The Montpellier striker resists the physical duel imposed by Danso and calmly deceives Leca with the flat of the foot (1-0, 47th).

What a treat! Facing the runner-up from PSG, Savanier confirmed his excellent start to the season with a new XXL performance. Technical festivals, inspired deviations, a constant desire… and above all this sumptuous decisive pass for Mavididi. Without forgetting another which could have been for Germain in the first period. when the France team for the former Nmois?

Jonas Omlin (7): Montpellier can thank its goalkeeper, who managed to keep the house late in the game despite many Lensoise opportunities. In the first half, he also made a superb save on a free kick from Clauss.

Salomon Sambia (7): what an activity! Announced as a substitute, Sambia proved his coach right with a full match. Offensively and defensively, despite a few careless mistakes late in the game, the training midfielder made a strong impression on the right side.

Maxime Esteve (6): solid and little worried in the first period, Esteve was not imperial at the end of the game when the Lensois set off to attack the Montpellier goal. But he still made several decisive interventions.

Mamadou Sakho (7): little kid, Sakho is becoming the boss of this defense. Facing Sotoca and Kalimuendo, the former Parisian performed well. At the end of the game, he also lacked serenity, but that does not detract from his very good game.

Nicolas Cozza (6): less prominent than Sambia, Cozza did the job on his left side. Without projecting himself too much offensively, he was rather reassuring defensively.

Jordan Ferri (6): 86 minutes of high level for the former Lyonnais before this second yellow card, synonymous with expulsion. Too bad because, before that, Ferri did not deserve with a big volume of play and a lot of accuracy in the orientation of the ball. After its red, the MHSC suffered greatly.

Joris Chotard (6.5): we will remember that he triggered the first of 40 strikes in this match, but it was countered by a defender. We will also remember his standard activity in midfield, with many collected balls to allow Savanier to concentrate on the offensive game.

Florent Mollet (6.5): it is he who recovers the ball in the feet of Frankowski on the action of the goal. Other than that, Mollet didn’t really shine offensively but he worked like his entire team to hold the scoring after Mavididi’s goal. Replace the 83rd minute with Nicolas Gioacchini (not rated).

Stephy Mavididi (7.5): a big match for the Montpellier striker, who quickly signaled himself with a curling shot that grazed the post. He did not let go afterwards, forcing Leca to parade twice… before finding the opening on a superb serve from Savanier. At the end of the match, he passed close to doubling.

Valre Germain (7): that it seems far away, Germain in a cruel lack of confidence in the OM jersey… Montpellier, the former Mongasque comes back to life and he once again proved it against Lens, with a superb job pivot. We will also remember his recovery on the pole, or this head which could have hit the mark in the second period. Replace the 76th minute with Mihailo Ristic (not not).

Jean-Louis Leca (5.5): apart from the duel lost against Mavididi, Leca was level. A frustrating match for him, therefore, but we will remember that he was saved by his post in front of Germain, and by his defenders at the end of the match.

Jonathan Gradit (5): less solid than usual, especially in the first period, during which Mavididi caused him many worries, Gradit suffered.

Kevin Danso (4): a complicated match for the central defender from Lens, who was physically eaten by Mavididi on the action of the goal. Danso did indeed find himself on the ground, and he could only admire the composure of the opposing striker. At the end of the match, he still deprives him of the double by countering his strike.

Christopher Wooh (6): the best defender from Lens of the day. Wooh made several decisive interventions in front of the Montpellier attackers, and he even allowed himself to throw himself at the forefront on certain sequences.

Jonathan Clauss (6): There are few bad matches for Clauss, and the right piston was still level today. In the first half, he could have found the loophole on a free kick, but Omlin put on a superb save.

Cheick Oumar Doucoure (5.5): if he obviously suffered against the genius of Savanier, Doucour nonetheless carried out rather interesting shadow work in midfield. On the other hand, he lacked precision on his only clear opportunity with a totally screwed-up strike.

Seko Fofana (7.5): like Clauss, Fofana rarely misses and he once again made a strong impression this Sunday. The best Lens player of the day, certainly, and the light seemed to be able to come only from him. Whether in the first or second period, he constantly pushed his people towards the Montpellier goal and he offered himself several solo raids.

Przemyslaw Frankowski (5.5): still as active on his left side, Frankowski lacked accuracy in the last movement. And especially in the last pass, despite several interesting situations for him.

David Costa (5.5): after a complicated first period, the Lensois attacking midfielder reacted well in the second period after the opening of the Montpellier score, but he quickly regained the sidelines. Replace the 65th minute with Corentin Jean (not rated), who missed a great opportunity at the end of the game.

Florian Sotoca (5): Franck Haise’s soldier once again fought like a devil at the forefront, but he showed an unusual technical waste. At the end of the match, he came across a good Omlin.

Arnaud Kalimuendo (5): rather available but rarely found in the first period, Kalimuendo struggled against solid defenders from Montpellier. At the same time as Costa, the 65th minute replaced by Wesley Sad (not rated).