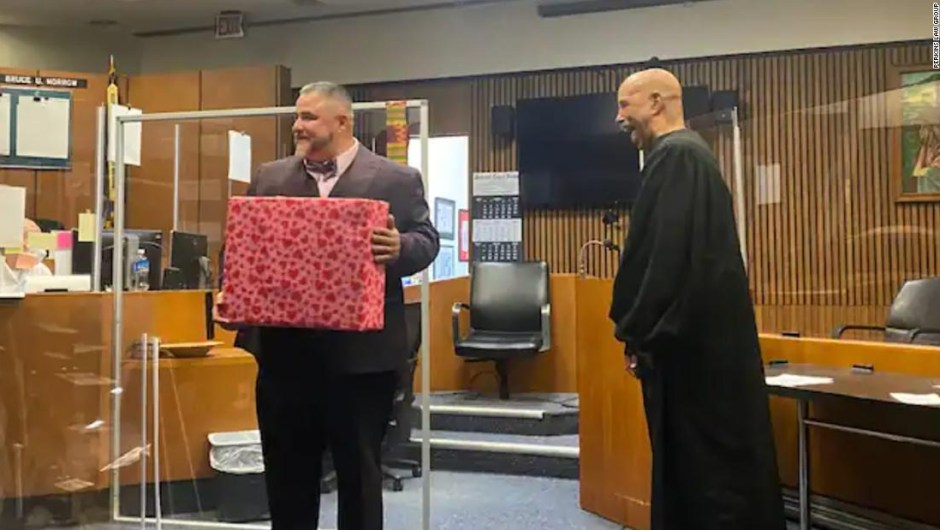 (CNN) – It was a Friday afternoon when Edward Martell, dressed in a deep purple suit and bow tie, stood in front of Judge Bruce Morrow’s courtroom. With one hand raised, the new attorney was sworn into office at the Michigan State Bar.Sixteen years ago, in that same Wayne County courtroom, Martell appeared before Morrow and pleaded guilty to selling and manufacturing crack.

After being caught in a drug trafficking ring, the 27-year-old went to court prepared to hear the worst: possibly 20 years in prison. Instead, he came away with a three-year probation sentence and words of encouragement that he said were life-changing.

“I realized right away that Morrow was a unique guy,” Martell told CNN. “I walked into his courtroom and looked at him and realized that he was treating the defendants like real people. I said to myself: wow, this judge is different!

I will never forget what he told me. He said ‘Mr. Martell, you don’t have to be out there selling drugs. You have a greatness within you. I challenge you to be the CEO of a Fortune 500 ‘company. “

When he left the building, Martell, now 43, told himself that he was ready to change. He was ready, he said, for a happier chapter in his life.

Although Martell says he was prepared to face the challenges ahead alone, Morrow remained by his side from the day he left that courthouse.

“I told Ed, my door is always open for you, here’s my number, I want to know what you’re doing, I want you to keep me in your life,” Morrow told CNN. I gave Ed a chance. Everyone deserves to be treated with a great sense of humanity and importance.

Edward Martell in the courtroom of Judge Bruce Morrow on the day he was sworn in.

Martell became a regular visitor to Morrow’s courtroom, sitting quietly in the back while the judge went through his schedule. The two met for lunch and spent hours in conversations that taught them everything they needed to know about each other.

Finding the strength to grow

Martell, of Mexican descent and the son of a single mother, was used to fighting.

He grew up in low-income housing, depending on government help to survive each day.

“As a child I didn’t realize how difficult it was until I got older and fell victim to many of the temptations that exist for young people,” he said.

Martell said he received his first conviction for a juvenile crime when he was 13 years old. Two years later, he was convicted of another serious crime. So he dropped out of high school and left home, he said.

His whole life was related to drug trafficking, until the moment he met Morrow.

“I’ve been in front of a lot of judges, at least 20,” Martell said. I’ve had more or less one ticket in most Wayne County cities. He knew he was destined for jail. I guess all I needed was a little love.

The judge was able to watch Martell grow for years, starting with his enrollment in a community college, to winning a full academic scholarship to the University of Detroit Mercy, and graduating top of his class.

Martell was then accepted into the university’s law school, where he received another full scholarship. The hardest thing, he said, was passing the character and aptitude request to show that he was morally fit to practice law.

“We had a hearing, he had to hire a lawyer, I testified about his character and aptitude,” Morrow said. “That was the big problem, that these people looked at him and made a decision about whether he was fit or not when they hadn’t been in his shoes one day.”

After weeks of worrying, finding people to back him up, and writing a 1,200-word request to support his conviction that he was competent to be a lawyer, Martell received a favorable result.

After passing the bar exam on his second attempt, Martell was close to the finish line.

The day he became a newly sworn attorney

It was a sunny day, with blue skies and cloudless, when Martell prepared to officially become a lawyer. He struggled to keep his hands steady as he buttoned his shirt.

It was the moment he had been waiting for since the day he decided to become a new person.

“I was nervous. I was excited. It was an unreal experience, ”Martell said. “I still have to pinch myself sometimes.”

When he entered Morrow’s room, followed by his mother, his brothers, and his own children, he tried to contain the irrepressible emotions of the moment.

“We were both very happy, very excited, but we tried to stay calm, like it wasn’t a big deal, so we didn’t seem agitated and silly,” Morrow said. “If Ed wore lipstick, we could have seen spots on his ears, that’s how big his smile was. It is a look that I will never forget.

After a short speech, Martell was sworn in. The judge and the ex-con hugged each other, both with tears in their eyes.

“I see him as my son,” Morrow said. «It was like taking your daughter to the altar. It was one of the moments when I felt very happy. My joy was for him ».

Although the story had a happy ending, it is not the end. They both said they learned lessons that they will carry with them for the rest of their lives.

The experience “reinforced” Morrow’s commitment not to judge others, especially those in front of him, not because of “their background, their way of speaking, their lack of good decisions,” he said.

“You might think ‘Oh, what an absurd decision’, but if you knew what they had before them to choose, you would say ‘You know what, I would have chosen that too.’

“Love changes people,” he added. “That is the most important lesson we should all learn from this story.”

While Martell taught him not to judge hastily, Morrow taught Martell the importance of committing to change. Not just for yourself, but for those around you.

“It is my duty to change the system,” Martell said. «I don’t want to be the exception; I must be the norm. For that to happen, I cannot use this story to boost my career, I have to use it to pave the way for others who are in the same place as me so many years ago.

After three years as a criminal law assistant at the Perkins Law Group, Martell joined the team as a criminal attorney. Now a father of four children, his goal is no longer to improve his own life, but to improve that of his children and that of subsequent generations.

With every step he takes, Morrow vows to stand by Martell’s side, holding him when he feels like he’s going to fall and reminding him to celebrate every achievement.

“Morrow opened the door for me and pointed me in the right direction, but he never left me,” says Martell. “I felt that he was his son and that he was proud of me. It was everything I dreamed of.