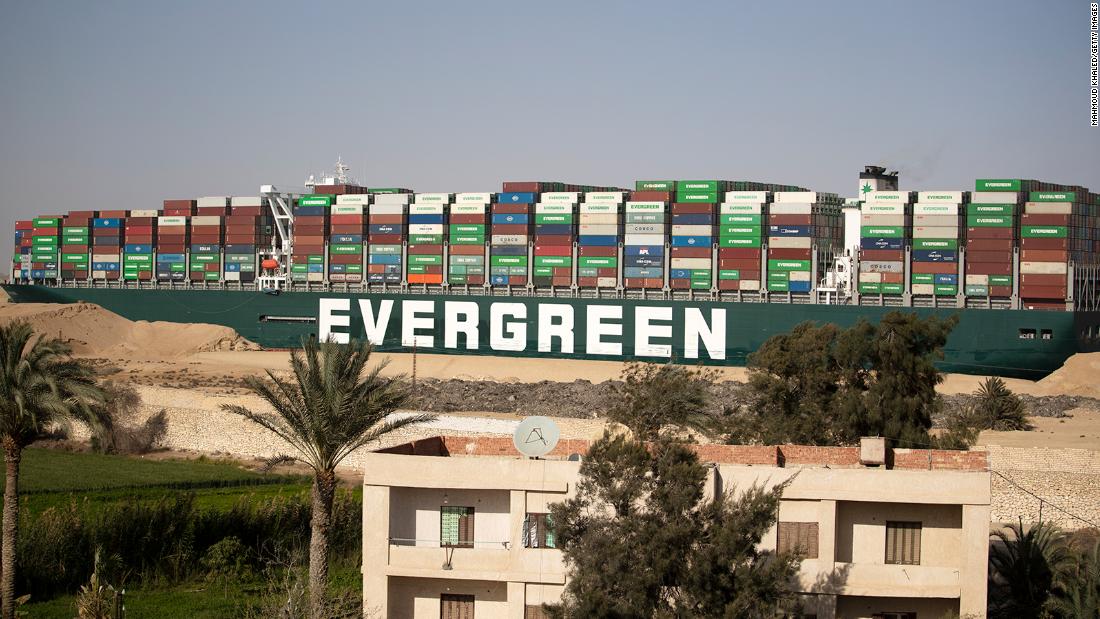 Impacts of the blockade on the Suez Canal are just beginning 2:47

(CNN) – In March, world trade was thrown into chaos by a ship. The Ever Given, a container ship almost as long as the Empire State Building, ran aground in Egypt’s Suez Canal. It was stuck for six days, disrupting global supply chains.

To prevent this from happening again, in mid-May the Suez Canal Authority (SCA) ad that had started dredging works to widen and deepen the southern part of the canal where the Ever Given got stuck.

The 30-kilometer-long sector will expand 40 meters to the east and deepen to 72 feet – almost 22 meters – (currently 66 feet, 20 meters) according to the SCA. The project also includes the expansion of the second lane near the Great Bitter Lake, which opened in 2015, by 10 kilometers, which will allow two-way traffic along an 82-kilometer stretch.

The works are intended to “maximize the efficiency of the canal and shorten the transit time of ships, as well as increase the safety of navigation,” said a press release from the SCA. But there are still doubts as to whether this will be enough to prevent future crashes.

“Expanding the canal is a smart move,” Sal Mercogliano, a maritime historian at Campbell University in North Carolina, told CNN. “The question I ask myself is that if the channel widens, will ship operators make their ships bigger?”

The increasing size of ships

In the past 50 years, the container shipping capacity of the largest vessels has increased 1,500%, and has doubled in the last decade alone, according to maritime insurer Allianz Global Corporate and Specialty.

The container ship Ever Given, which ran aground in the Suez Canal in March, blocking much of global maritime trade

Shipping companies argue that larger ships are more efficient at carrying large volumes of cargo across the globe and – under normal conditions – are capable of passing through the Suez Canal.

But “the margin of error is very narrow,” says Mercogliano. If there are strong winds – as in the case of the Ever Given – or poor visibility, large vessels run the risk of getting stuck.

The Ever Given case illustrated the possible repercussions of a blockade. At the time, maritime news magazine Lloyd’s List estimated that the ship was holding about $ 9.6 billion worth of cargo each day. The Suez Canal moves around 12% of world trade, with some 19,000 ships passing through it each year.

The expansion proposed by the SCA will help reduce the risk of ship jamming, but will not eliminate it, says Ioannis Theotokas, a professor in the Department of Maritime Studies at the University of Piraeus in Greece.

“It will never be enough if you don’t open a second lane in the south,” he tells CNN. But he believes that container ships are unlikely to increase in size, so further expansions may not be necessary.

“The increase in the size of the ships caused large investments in the ports to be able to support them. A new increase would require more investments ”, which are not easy to achieve, he adds.

Maersk, the world’s largest container shipping company, told CNN that it welcomes plans to widen and deepen the southern part of the pass.

“Increasing the section with double lanes will allow more ships to transit through a vital canal that receives around 10% of world trade flows. Deepening and widening will reduce the risk of grounding, ”says Aslak Ross, Head of HSE and Marine Standards at AP Moller-Maersk.

He adds that “the current size of the vessels is adjusted to the demand of our network [la empresa] it has no plans to move larger ships than the ones we do today through the Suez Canal. ‘

New routes in the future

However, the Ever Given incident sparked debate about alternative routes. The strategic position of the canal, which connects the Mediterranean with the Red Sea and offers the shortest sea route between Europe and Asia, is key to its influence.

Without the Suez Canal, shipments between the two continents would have to go around the Cape of Good Hope, at the southern tip of Africa. Some shipping companies opted for this route while Suez was blocked, even though it takes more than twice as long.

“It is no coincidence that, shortly after the Ever Given incident, Russia commented on the appeal of alternative routes, specifically the northern sea route,” says Theotokas. That route runs along the Arctic coast of Russia, from the Kara Sea to the Bering Strait.

This satellite image shows how the ship was stuck in the Suez Canal. (Credit: Maxar Technologies / AP)

An official from the nuclear company Rosatom, in charge of the development of the route, told a Russian news agency that “the precedent of Suez has shown how fragile any route is between Europe and Asia,” and urged the development of alternative routes such as the from the North Sea.

Shortly after these comments, the shipping company MSC, the world’s second largest container shipping company, redoubled its commitment to avoid the northern sea lane for environmental reasons. Shipping in the Arctic could increase pollution and contribute to the melting of the sea.

Theotokas believes that Suez’s position as a global trade route will continue to be consolidated.

“Shipping companies are always prepared to take risks like Ever Given,” he says. Scaling up the SCA will only make them feel more comfortable doing it.

«The expansion of the canal will facilitate rescue operations […] although it does not eliminate the risk of a recurrence of the incident, “he says.

1 thought on “The Suez Canal is expanding: will it be enough to avoid another traffic jam?”