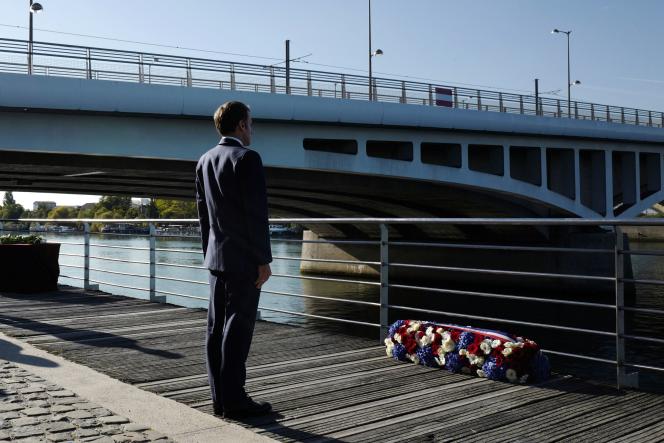 Sixty years later, Emmanuel Macron commemorated, Saturday, October 16, the bloody night of October 17, 1961, during which at least 120 Algerians were killed by French police during a demonstration in Paris.

The head of state “Admitted the facts: the crimes committed that night under the authority of Maurice Papon are inexcusable for the Republic”, then underlined a press release from the Elysee.

“The repression was brutal, violent, bloody. Nearly 12,000 Algerians were arrested and transferred to sorting centers at the Pierre-de-Coubertin stadium, the Palais des sports and other places. In addition to many wounded, several dozen were killed, their bodies thrown into the Seine. Many families have never found the remains of their loved ones, who disappeared that night. The President of the Republic pays tribute to the memory of all the victims. “

The Head of State went to lay a wreath in the middle of the afternoon on the banks of the Seine, at the height of the Bezons bridge, in the Parisian suburbs. This bridge was taken sixty years ago by Algerian demonstrators who arrived from the neighboring slum of Nanterre at the appeal of the branch of the National Liberation Front (FLN) installed in France.

In 2012, Mr. Macron’s predecessor, François Hollande, had mentioned a “bloody repression”, in a press release.

Read also Article reserved for our subscribers Mohammed Harbi: “Emmanuel Macron would have to recognize the state massacre” of October 17, 1961

After the delivery of the report by historian Benjamin Stora on the colonization and the Algerian war (1954-1962), in January, the Head of State undertook to participate “Three commemorative and emblematic days” : the premiere took place around September 25, national day of homage to the harkis and the second this Saturday. The third will be on March 19 for the 60th anniversary of the Evian accords, which ended the war in Algeria. “France must recognize this tragedy as an inexcusable tragedy, as a kind of crime which has been decided”, had estimated a little earlier, on Saturday, Benjamin Stora on Europe 1 and Cnews. “There is a responsibility of the State under the authority of Maurice Papon”, Paris police prefect from 1958 to 1966.

Read also Article reserved for our subscribers Massacre of October 17, 1961: what words for the recognition of the crime?

This ceremony took place in a tense context between Paris and Algiers, after remarks by Mr. Macron reported by The world, October 2. The French president blamed the system “Politico-military” Algerian to maintain a “Memorial rent” by serving his people a “Official story” who “Does not rely on truths”.

“Whatever the state of our relations with Algeria and whatever the positions of the Algerian authorities on the issue, we are doing it for ourselves, not for Franco-Algerian reasons”, we assure at the Elysee.

The Head of State, who has undertaken an unprecedented work of memory on the Algerian war, wishes above all “Look history in the face”, as it did in Rwanda by recognizing the “Responsibilities” from France in the 1994 Tutsi genocide. “But that doesn’t mean rewriting history or reinventing it”, warns the Elysee.

“The President of the Republic has decided to lead this memorial battle in a methodical and organized manner. There was Maurice Audin, Ali Boumendjel, forgiveness for the harkis… We have made more progress on the memorial site in a few months than in sixty years ”, assures Mr. Stora.

One thought on “Massacre of October 17, 1961: Emmanuel Macron denounces “inexcusable crimes”, “committed under the authority of Maurice Papon””