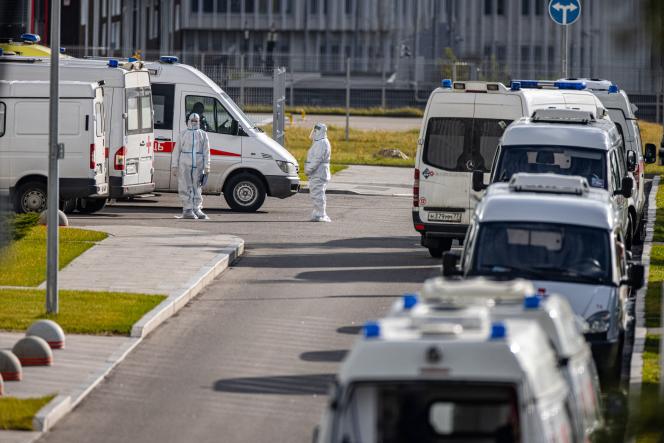 Never has Russia experienced so many deaths linked to Covid-19. On Saturday, October 16, the country recorded more than 1,000 deaths for the first time since the start of the pandemic, as the country’s vaccination campaign stalled. The official government count shows 1,002 deaths and 33,208 new infections.

This outbreak comes when only 31% of Russians are fully immunized, according to the specialized website Gogov, against a background of public mistrust and while Russia is the country hardest hit in Europe by the virus. SARS-CoV-2 is spreading as government health restrictions are limited, although several regions have reintroduced the requirement to present QR codes to access public places.

Read also Article reserved for our subscribers Covid-19: in Russia, ever higher mortality, day after day

The Kremlin, concerned with preserving the economy, refused to put in place significant restrictions at the national level, while judging “Inadmissible” the low rate of anti-Covid vaccination. “Our main mission is to find the right balance between breaking the chains of contamination (…) and maintain the conditions to allow the economy to run and people to keep making money ”Kremlin spokesman Dmitry Peskov said on Monday.

The Russians have been facing a drop in their standard of living since 2014, weighing down the popularity of the authorities. The Kremlin also assured this week that the medical system is able to accommodate the growing number of sick people.

Russia has gained experience since the start of the pandemic and “All the medical infrastructure is mobilized”, Mr. Peskov said Thursday. “Today, there are more treatment technologies, more medical monitoring and more infrastructure capacities. “

The authorities blame the behavior of the Russians. Health Minister Mikhail Murashko attributed the current situation “In the first place to the behavior of the population and to vaccination” insufficient despite availability of several national vaccines. In addition to the low vaccination rate, the spread of the virus is facilitated by poor compliance with barrier gestures. More than half of Russians do not plan to get the vaccine, independent polls show.

Since the start of the pandemic, Russia has officially recorded more than 222,000 deaths, the highest figure in Europe even as authorities are accused of downplaying the scale of the outbreak in the country. Rosstat Statistics Institute, which has a broader definition of coronavirus-related deaths, reports more than 400,000 deaths.

1 thought on “Covid-19: the pandemic is killing more and more people in Russia – archyde”