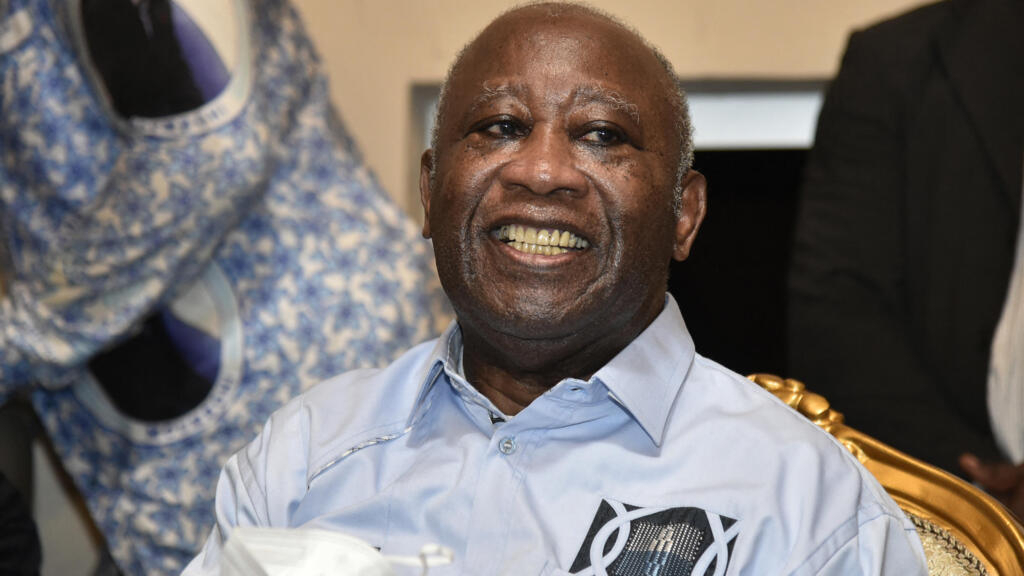 The former Ivorian president Laurent Gbabgo, back in the country since June after almost 10 years of absence, launches this weekend of October 16-17 a new political party to “unite the left”, with the presidential election of 2025 in sight.

“This is Laurent Gbagbo’s big comeback on the political scene,” Justin Koné Katinan, spokesperson for the former head of state, told AFP. Since his arrival in Abidjan on June 17, acquitted by international justice who tried him for crimes against humanity in the bloody post-electoral crisis of 2010, Laurent Gbabgo has never been very far from politics.

The Ivorian Popular Front (FPI), his historic party founded underground in 1982, now in the hands of Pascal Affi N’Guessan, Laurent Gbagbo has chosen to breathe new life into his return by creating his own training. Some 1,600 delegates are expected, Saturday 16 and Sunday 17 October, at the prestigious Hotel Ivoire in Abidjan to draft the manifesto and the texts of this new formation which should be called “Party of African Peoples – Côte d’Ivoire” (PPA -THIS).

In the name as in the logo – two hands intertwined in a map of Africa – which will be offered on Sunday, the emphasis is on the pan-African dimension of the party. The sovereignty of Africa vis-à-vis the Western powers should also be one of the flagship themes of the congress this weekend.

However, there is no question of abandoning national politics in Côte d’Ivoire. In the entourage of the former president, the slogan is clear: this new party aims to recreate a political debate in a country where the opposition has been considerably weakened for 10 years. “We want to constitute a normal political opposition party which brings a criticism. So that the debate leaves violence and becomes essentially political”, proclaims Justin Koné Katinan.

“We are waiting to see if it will be a real opposition or a party in search of power. We will see how they will proceed, what will be their alternative program,” said political analyst Sylvain N’Guessan.

It remains to be seen which Ivorian political figures will join this platform. A large part of the executives and former ministers of the FPI will follow their former leader in this new adventure. Some unknowns remain, but the one surrounding Simone Gbagbo has been lifted.

The former First Lady, from whom Laurent Gbagbo filed for divorce on his return to Côte d’Ivoire, has been sending signals in recent weeks to go it alone, like the launch of a platform supporting her. In Abidjan for France 24, Marc Perelman confirms it: Simone Gbagbo, co-founder of the FPI in 1982, will not be present at the congress. She is in the Democratic Republic of Congo, where she has commitments, but also felt left out of the launch of the new party.

Charles Blé Goudé, then. The influential pillar of Gbagbo’s regime (2000-2011), of which he was the co-accused in The Hague, has still been blocked in the Netherlands since his acquittal for lack of a passport. But he maintains the mystery about his role when he returns to Côte d’Ivoire.

Finally Guillaume Soro, former leader of the rebellion, who helped Alassane Ouattara to gain power against Laurent Gbagbo. He is now disgraced, sentenced to life in June for “conspiracy”, and currently in exile. What to leave the door ajar to the one who now embodies a fringe of the opposition to the Head of State.

“Those who want to join us know what to expect. We are a leftist party, and those who meet there can come,” slips Justin Koné Katinan. The launch of this party, four months after Laurent Gbagbo’s return to Côte d’Ivoire, is in any case a first step towards the presidential election of 2025. A project by the executive aimed at limiting the age of candidates to 75 years could however constitute an obstacle to the ambitions of Laurent Gbagbo. In 2025, he will be 80 years old.

One thought on “Ivory Coast: Laurent Gbabgo returns to politics with a new party”