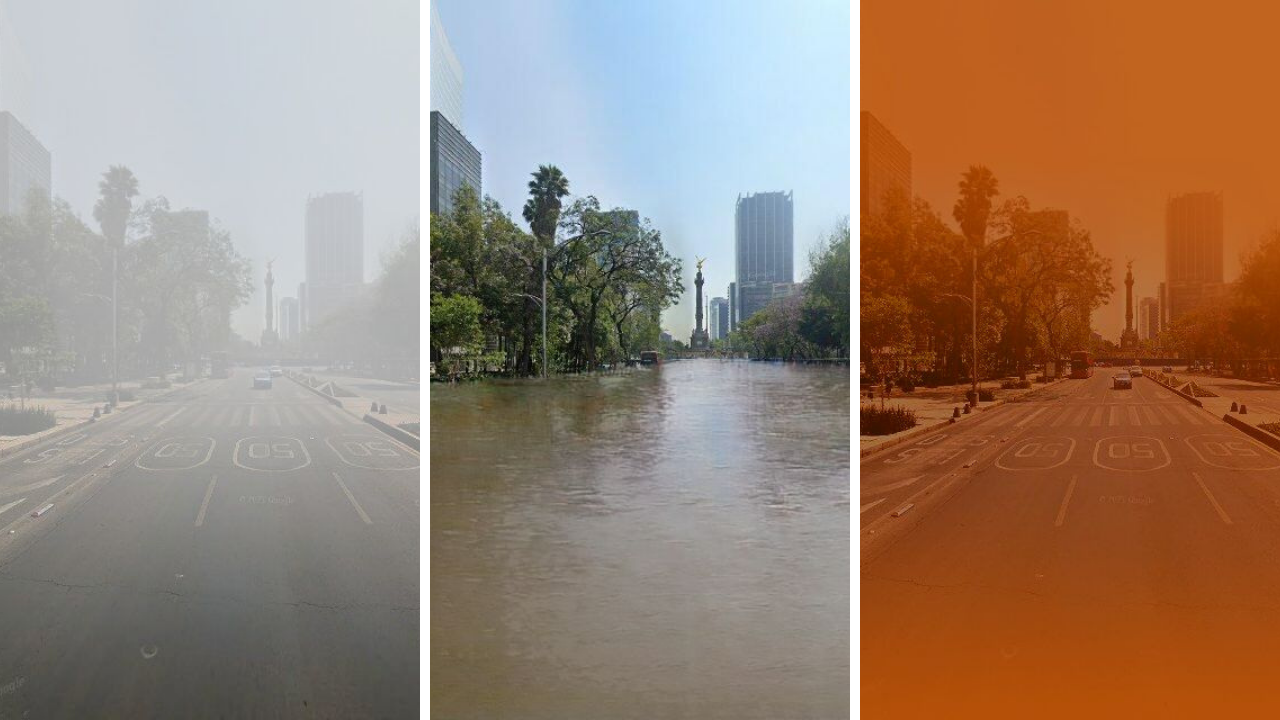 The sea could devour large coastal cities, this is what they would look like 0:57

(CNN Spanish) – Perhaps you have never lost all your belongings in a matter of minutes due to a flood or have seen how the house you saved for your entire life burns in the middle of a raging fire. You may be lucky enough to live in a city with good air quality. But what would your life be like if this were not the case? Now a Web page made from artificial intelligence shows you.

This Thursday, after two years of work, the page was launched ThisClimateDoesNotExist.com, as well reports CNN Business. On the page you can search for any address (your house, your favorite park, the last place you went on vacation, whatever you want) and you will get images that will show you what the place would look like if it were affected by floods, fires or smog.

The site, CNN Business explains, was created by experts at an Artificial Intelligence research institute in Montreal called Mila. Its goal is to raise awareness about the effects of climate change, which, according to the latest report by the UN Intergovernmental Panel of Experts on Climate Change (IPCC), is making extreme weather events worse.

Mexico City’s iconic Angel of Independence would look like this if it was impacted by floods, smog or smoke from fires. (Images: https://thisclimatedoesnotexist.com/)

This 2021 gave us more than enough proof of the ferocity that fires, hurricanes, floods, heat waves can reach. And experts warn that, if the rise in global temperatures (which has already reached 1.1 degrees Celsius above pre-industrial levels, dangerously approaching the 1.5 threshold) is not limited, these types of phenomena will worsen.

An important clarification: these images do not mean that it is what will happen in your house, block and neighborhood in particular indisputably. The effects of climate change will be felt in different ways in different regions of the world, so the events you face can be diverse. However, they are a sample of what millions in the world are already facing (and will face).

You can simulate what would happen in the direction you choose here.

And this is what the iconic La Boca neighborhood in Buenos Aires would look like. (Images: https://thisclimatedoesnotexist.com/)

How did you get these images?

There are not too many pairs of images showing houses before and after a flood, for example, which are the kind of useful information to train an artificial intelligence system to be able to project what would happen in a place. Due to this lack, explains CNN Business, the researchers decided to build a computerized virtual world. “This world, equivalent to several city blocks, allowed them to control floods and other elements to be able to create synthetic images of places’ before ‘and’ ‘after’ a climate catastrophe, explains Sasha Luccioni, postdoctoral researcher at the University of Montreal and Mila and principal investigator of the project “, they explain.

The Plaza de Bolívar, in Bogotá, would thus be left under the effects of smog, fires and floods. (Images: https://thisclimatedoesnotexist.com/)

The researchers then took that data into real images showing the effects of flooding, the skies polluted by smoke from fires and smog, and thus trained the artificial intelligence system so that it can take any image from Google Street View and recreate how the site would look in the face of an environmental catastrophe.

The second warning in less than a week

Earlier this week, the organization Climate Central published new research that allows you to visualize what coastal cities around the world will look like if the rise in global temperatures is not limited to 1.5 degrees Celsius and follows its current trajectory, heading at 3 degrees.

This approach is different, since it is predictive in nature: it visualizes how these cities will be due to the rise in sea level, another of the consequences of climate change caused by man.

However, it is another image that alerts us to the possible future of our planet if bolder actions are not taken to curb the crisis, according to the researchers, and it comes just weeks before a key summit of world leaders where climate commitments will be discussed. .

With information from Rachel Metz.