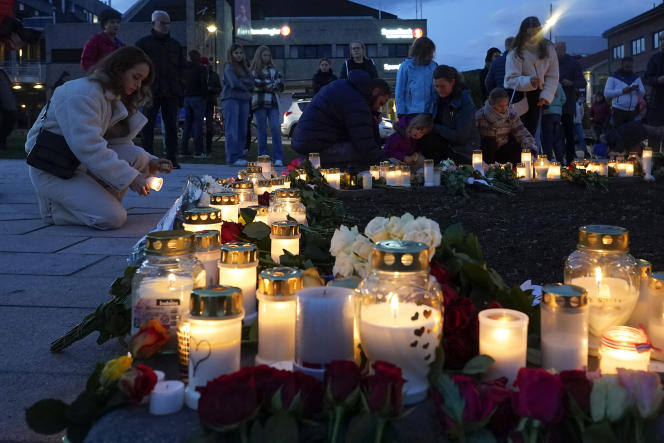 Over the revelations, Thursday, October 14, the profile of the alleged perpetrator of the attack which left five dead and three injured, the day before, in Kongsberg, a village of 25,000 inhabitants in the southwest of Norway, began to take shape. In the afternoon, the head of the Norwegian intelligence services (Politiets Sikkerhetstjeneste, PST), Hans Sverre Sjovol, considered that there was no “No doubt that the attack is a terrorist act “, even if the investigation will have to specify the motives of the killer.

Of Danish nationality, Espen Andersen Brathen, 37, grew up in Norway and spent most of his adult life in Kongsberg. According to regional police chief Ole Bredrup Sæverud, the man, who had converted to Islam, was being followed up, due to “Fears linked to radicalization”. Mr. Sjovol also said that the intelligence services “Knew” the suspect, without specifying what information the PST had or whether specific measures had been taken.

Kongsberg police were alerted at 6:13 p.m. on Wednesday by witnesses, having seen a man, armed with a bow and arrows, shoot passers-by near a supermarket, causing scenes of panic. The suspect was arrested thirty-four minutes later. According to the police, he wore “Other weapons”, in addition to the bow, and he killed several of the victims in their homes. They are four women and a man, aged 50 to 70.

In Norwegian media, a childhood friend of his claimed to have contacted the police as early as 2017. Espen Andersen Bråthen had posted two videos on Facebook – one in English, the other in Norwegian. Shaved head staring at the camera he introduced himself as ” a messenger “, carrier of” a warning “. “For all those who want to catch up, the time has come”, he declared, before concluding: “Be a witness that I am a Muslim”.

His friend described him as “A bomb about to explode” and assured that he “Needed help, but didn’t get it”. A relative of the family told NRK that he was “Seriously mentally ill”, and this since adolescence, which has “Affected the lives of his relatives to a high degree”. Unemployed, Espen Andersen Brathen lived alone in an apartment in Kongsberg and had “Goes back and forth to the hospital”, according to Mr. Sjovol.

In 2012, he was sentenced to a sixty-day suspended prison sentence for breaking into a museum and stealing there. He was also convicted of possession and use of narcotics. In July 2020, a court banned him from approaching his parents for six months, after he threatened his father to kill him. Thursday, prosecutor Ann Irén Svane Mathiassen said he would undergo a psychiatric examination, to determine if he could be held responsible for his actions.

You have 33.96% of this article to read. The rest is for subscribers only.

One thought on “Archery attack in Norway: convert to Islam and radicalized, suspect will undergo psychiatric examination – archyworldys”