Survey of preferences HOW: The election would be won by Hlas, Smer still in the top three – SME.sk

The leader of the governing coalition OĽaNO would end up in fourth place.

BRATISLAVA. If the elections were held in October, the Voice party would receive the most support with a gain of 18.2 percent. The second would be SaS with 14.5 percent and the third Direction with 13.8 percent of the vote.

This follows from a survey by the AKO agency for TV Joj on a sample of 1000 respondents. 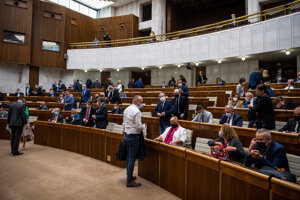 Related article Who would form a government? Click on possible coalitions Read

The Alliance would remain at the gates of parliament with 4.5 percent, SNS with 3.6 percent etc. ĽSNS with 2.3 percent. Party For People would vote 2.1 percent of voters, the Good Choice 1.8 percent and a total of 1.2 percent.

Socialisti.sk, the Hungarian Forum and the KSS would win 0.5 percent each. The Slovak Revival Movement and the Slovak Patriot would receive 0.2 percent of the vote.

According to the results of the poll, the vote would win 33 seats in parliament, SaS 26 and Smer 25 deputies. OĽANO would occupy 17 seats, Progressive Slovakia 16 seats, We are a family would have 13 seats, KDH 11 deputies and the Republic nine.

Data collection took place by telephone from 4 to 7 October.

KDH Majerský boss: Boris Kollár is not a conservative politician, Taraba is too aggressive – Aktuality.sk

One thought on “Survey of preferences HOW: The election would be won by Hlas, Smer still in the top three – SME.sk”