Zeman’s wife begs for tolerance and time: She did not specify the status of the president – Topky.sk 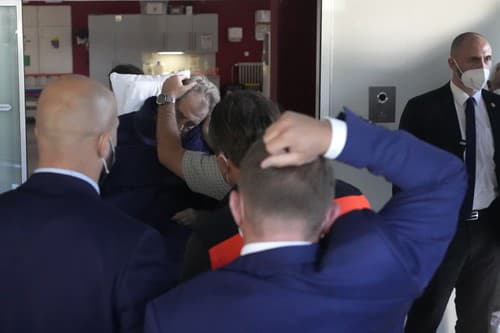 “I can only confirm that he is currently undergoing treatment that will take time. I find speculation about diagnoses and prognoses very unethical, to say the least.” Zeman said of her husband’s health. She described the health of each person as a sensitive and serious thing. “Most of all, I want my husband to recover.” she added.

President Zeman’s wife asked for patience and the necessary time

The media asked for patience and the time needed for Zeman to gain strength. “He is not the only president who has fallen ill while in office, so I beg your tolerance again.” she stated. She added that she would inform when further developments were known. At the same time, she asked everyone who loved Zeman to think of him.

Zemanová appeared in front of about forty journalists together with her daughter Katařina, both of whom were dressed in dark clothes. The first lady read her prepared statement, Kateřina did not speak. The meeting with journalists took place in front of the statue of the first Czechoslovak president Tomáš Garrigu Masaryk in the Rothmayer Hall at Prague Castle.

Zemanová communicates with the media minimally. As today, with a prepared statement in front of journalists, she appeared twice in 2017, when she announced the details of the collection of signatures in support of Zeman’s presidential candidacy.

The president has been hospitalized for five days

The first lady’s press statement took place on the fifth day of the president’s hospitalization, about which his surroundings did not provide details to the public. Prague Castle has been facing long-term criticism for informing about the health of the head of state. Due to the lack of information, the chairman of the Senate, Miloš Vystrčil (ODS), also turned to the office of Vratislav Mynář. He wants to know what is the prognosis for the further development of the president’s health. According to some politicians, Parliament should consider whether the president will be deprived of his powers due to his inability to hold office. According to some constitutional lawyers, such a procedure is premature a few days after the start of hospitalization.

One thought on “Zeman’s wife begs for tolerance and time: She did not specify the status of the president – Topky.sk”