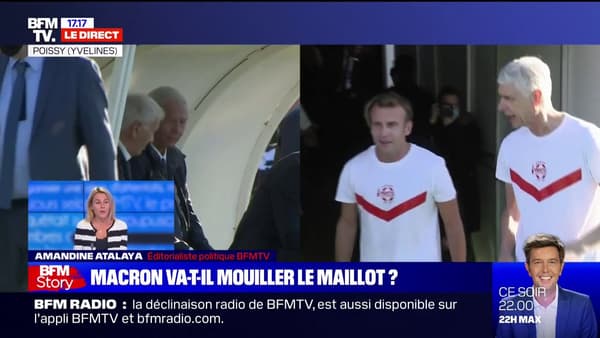 In Poissy (Yvelines), Emmanuel Macron took part on Thursday in the charity match of the Varieties Club de France against a team of caregivers. The proceeds from this event are intended for the Fondation Hôpitaux de Paris-Hôpitaux de France.

Holder in midfield, Emmanuel Macron was on Thursday in crampons on the lawn of the Léo-Lagrange stadium in Poissy (Yvelines) for a charity football match. Notorious supporter of Olympique de Marseille, the President of the Republic donned the jersey n ° 3 of the team of the Variétés Club de France, to face a formation made up of caregivers from the intercommunal hospital center of Poissy / Saint-Germain -en-Laye.

The first incumbent president of the Fifth Republic to officially play a football match, Emmanuel Macron was aligned in the midfield with the former Lyon coach Rudi Garcia. Karl Olive, the mayor of Poissy, was the only other non-footballer in the starting XI. The rest of the team consisted of Nicolas Douchez, Christian Karembeu, Arsène Wenger, Marcel Desailly, Laure Boulleau, Alain Giresse, Jean-Michel Larqué and Sonny Anderson.

During the warm-up, Emmanuel Macron exchanged triangle passes with Robert Pirès and Sidney Govou. He demonstrated, with his right foot, a voluntary technique.

This football match closes a day that the Head of State devoted to sport. Traveling in Seine-Saint-Denis, Emmanuel Macron announced a “huge boost” to put “sport at the heart of the nation” by the Paris 2024 Olympic Games. He thus announced the creation of 5,000 local sports equipment for 200 million euros.

During the morning, the former basketball player Tony Parker, who had played another charity match the day before, took the opportunity to warn him about the meeting with the Variety Club of France: “It’s 90 minutes long”. “We will see if they take me out!”, Then retorted the president, who had promised “to try to look good”.