Tour de France 2021: suspended prison sentence required against the spectator with the sign 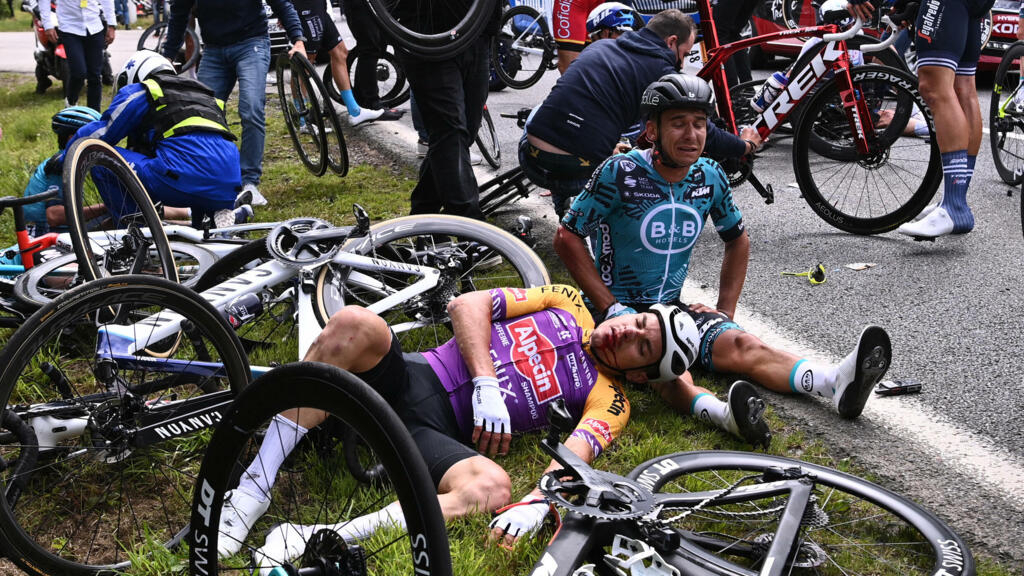 The reckless spectator who had brandished a sign and caused an impressive fall of the cyclists of the Tour de France 2021 was sentenced, Thursday, to four months in prison. The young woman had presented “her regrets” and recognized the “dangerousness of her behavior”.

The sanction fell against the reckless spectator of the Tour de France 2021. Four months of suspended prison sentence were required, Thursday, October 14, against the young woman who had caused a massive fall of Tour de France riders in holding up a sign for his grandparents last June.

The deputy prosecutor Solenn Briand stressed before the Brest criminal court that the defendant, aged 31, had recognized “the dangerousness of her behavior” and “presented regrets”. The judgment was reserved on December 9.

She responded to charges of “endangering others by manifestly deliberate violation of a particular obligation of prudence or safety imposed by law or regulation” and “involuntary injuries resulting in incapacity for work not exceeding three months. “. The judgment was reserved on December 9.

Dressed in pants and a navy blue sweater, the young woman, unemployed and without a criminal record, had fled the cameras on her arrival at the criminal court.

His lawyer Julien Bradmetz, who unsuccessfully called for the closed session, presented his client as having “a fragile personality for many years”. “This fragility has been increased tenfold so that today my client is living through hell,” he said.

“Go opi-omi!” – grandpa-mamy in German, her grandmother being of German origin – had written the young woman in large letters on a piece of cardboard to the address of her grandparents, unconditional fans of the Grande Boucle.

It was last June 26, in the town of Sizun, 45 km from the finish of the first stage of the Tour, part of Brest. The young woman, who lives in Finistère, brandished her sign, encroaching on the road, her back to the peloton. Several runners, launched at high speed, could not avoid it. The German Tony Martin, the first to fall, had dragged many other cyclists into his fall.

The Tour de France, which had initially announced its intention to file a complaint, finally gave up saying it wanted to “calm things down”. “This lady made a huge ball which could have had even greater consequences but she is not a terrorist”, declared the director of the Grande Boucle, Christian Prudhomme, on the sidelines of the presentation of the Tour 2022 route.

Age of Empires IV: our impressions of the revival of a cult license

One thought on “Tour de France 2021: suspended prison sentence required against the spectator with the sign”