Prince William: Saving a planet is more important than flying into space – SME.sk 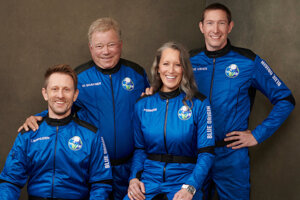 While the young suffer from climate anxiety, the actors fly into space, the prince warned.

LONDON. Entrepreneurs should focus more on saving the planet than flying into space, British Prince William said in an interview with the BBC television station.

“We need some of the world’s best brains and minds to try to save this planet instead of finding a new place to live,” said the Duke of Cambridge.

The announcement came after actor William Shatner flew into space on Wednesday in a rocket developed by the American company Blue Origin of billionaire Jeff Bezos. William said he himself had “absolutely no interest” to fly into space. He also mentioned the carbon footprint of space flights, which he described as their “fundamental problem”.

The prince also noted the increased incidence of “climate anxiety” among young people whose “future is at stake”.

In the interview, William recalled that his grandfather, Prince Philip, had already dealt with this issue.

“My grandfather started helping the World Wide Fund for Nature (WWF) climate change my father (Prince Charles) also dealt with it. That was long before it (this phenomenon) became a topic in society, “said William.

The Duke of Cambridge also announced last week about the so-called Earthshot Prize, which is worth a million pounds (1.1 million euros). Future laureates will be awarded for a positive contribution to environmental protection. It will be handed over for the first time in London at the end of this month, then the ceremony will be in a different city each year.

One thought on “Prince William: Saving a planet is more important than flying into space – SME.sk”