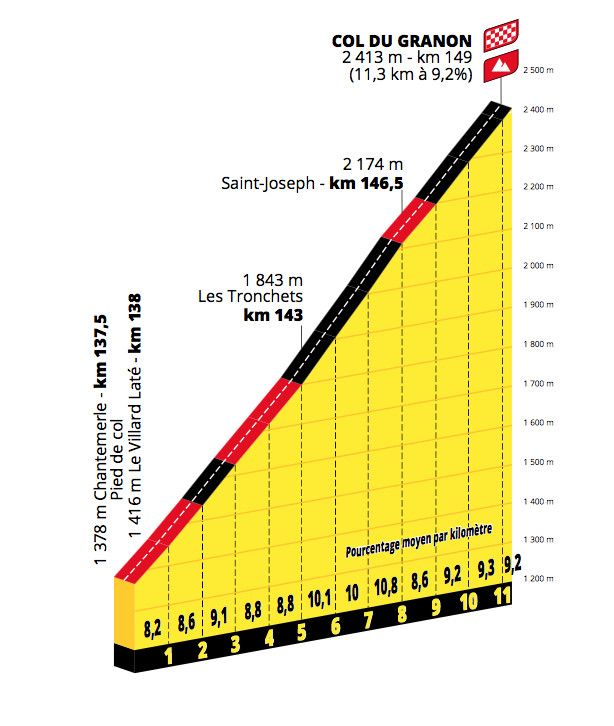 It does not make its debut on the Tour de France, but it is just like. While the 2022 edition will offer only one new difficulty that has never been climbed (the Col de Spandelles during the 18th stage between Lourdes and Hautacam), a surprise guest should steal the spotlight: the Col du Granon. A monster of slope which will come to close the 11th stage part of Briançon, on the eve of the national holiday on July 13th.

Climbed only once in 1986, when Bernard Hinault had given up his yellow tunic to Greg Lemond, it had since been put away. Twenty-six years later, the peloton will find him again for their greatest (dis) pleasure. And it has everything, like the Loze pass in 2020, to mark the spirits of this 2022 edition.

Already, because its slope is thrilling just to see the profile: 11.3 km at 9.2%, the most important average slope of this edition. “The Col du Granon is very hard. It is very beautiful, it is a nice steady climb, but regularly hard. There is not even a bend where the slope eases a little. It is an average of 9.2% with passages at 10% “, begins our consultant Laurent Jalabert.

The profile of the Col du Granon, which will be climbed during the 11th stage of the Tour de France 2022. (ASO)

The least steep passages are at the foot, and yet they are never below … 8%. “The foot is the most rolling, then we enter parts that are regularly hard.” The profile confirms it: there will be no respite for the runners that day. Culminating at 2,413 meters, the highest finish of this edition, the Col du Granon cultivates a resemblance to another giant located in Provence: “When you come out 4-5 kilometers from the top, you are totally in the open, there is no more vegetation. Often, it blows up there, so it can play on the final part. It can help dig holes. gaps for the strong, and to waste even more time for those in difficulty “, reveals Laurent Jalabert.

Always eager for novelty to spice up its courses, the team of Christian Prudhomme and Thierry Gouvenou went in search of this forgotten giant to make it one of the highlights of its 2022 edition. the sporting aspect, as were the Cormet de Roselend, reintroduced in 2018 after nine years of absence, or the Col de la Loze, a find of the Tour 2020.

But introducing it alone would have been too nice: the organizers sprinkled it just before the Col du Télégraphe (11.9 km at 7.1%) and the Col du Galibier (17.7 km at 6.9%), or almost 30 kilometers of ascent to attack the organisms as necessary for this first high mountain stage. “At the Super Planche des Belles Filles (7th stage), we will know who will not win the Tour, which had been an illusion until then, which was not that strong. On the other hand, the Col du Granon could tell us who will be the future winner “, observes our consultant.

All the more so since a successful ascent to the Col du Granon, located near Serre-Chevalier, does not completely predict a successful Tour de France since the next day is also dizzying. “As a bonus, the next day there is a big stage again, with the Galibier on the other side and the Croix de Fer, which is a big pass”, Jalabert warns.

While the peloton will have spent two stages in hors-d’oeuvre in the Alps with the arrivals in Châtel (Switzerland) then Megève, which will not necessarily have launched the great explanation, hard not to imagine a merciless fight between the favorites during this 11th stage. “It’s going to be a very, very important finish for the yellow jersey. We should see an explanation between strong people because the ground is really suited to that. It’s such a demanding finish that there will be no room for to hide”, concludes Laurent Jalabert.

In 2021, a certain Tadej Pogacar jumped at the chance during the first mountain stage in Le Grand-Bornand, to knock out the Tour in the pouring rain. For the same scenario in 2022 with the Granon as a theater?