Tour de France 2022: from Denmark to the Pyrenees via the cobblestones and L’Alpe d’Huez … The route of the – Franceinfo 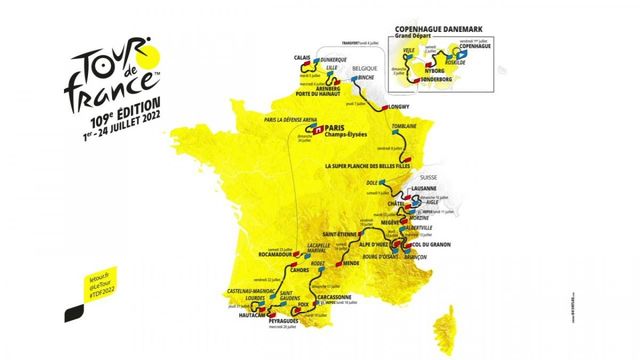 The route of the Tour de France Men 2022 was unveiled, Thursday, October 14, in Paris. For the 109th edition of the Grande Boucle, the runners will leave Denmark on July 1st before reaching France via the North and its cobblestones, then the Vosges and the Planche des Belles Filles. The climbers will then decide between themselves in the Alps and the Pyrenees, before a final time trial on the eve of the arrival in Paris on July 24.

A big start and three days in Denmark

As planned in 2021, before the health crisis forces the organizers to adapt and change their route, the big start of the Tour de France 2022 will be from Denmark, which will become the 10th country to welcome the riders during the the first stage, and the one most northerly in the world: “It will be the northernmost start in the history of the Tour. There are often criticisms when the Tour starts from abroad, but it allows us to find new fans, to promote the race and France “, justifies Christian Prudhomme, the director of the event.

>> DIRECT. Tour de France 2022: follow the presentation of the route of the 109th edition

The first stage, on Friday July 1, will be a time trial in the streets of Copenhagen, the most cycling city in the world. On the second day, between Roskilde and Nyborg, the runners will cross the Great Belt, a strait separating the two largest islands in Denmark: “In the last 20 kilometers of the stage, 18 will take place over the Baltic Sea, thanks to two bridges. There will be wind which could create gaps”, explains the boss of the Tour de France. The third stage, between Vejle and Sondeborg should end in a sprint.

Tricky stages in the North

After a day’s transfer, the runners will return to France for a tricky stage, between Dunkirk and Calais, along the Opal Coast, with a passage through Cap Gris-Nez, Cap Blanc-Nez and some mountains of Flanders. “Six hills will be listed in the mountain ranking and there will also be a lot of wind at the top of those hills. It will be pretty much a classic.”, Christian Prudhomme analysis.

>> Tour de France 2022: from Denmark to the Pyrenees via the cobblestones and L’Alpe d’Huez … The route of the 109th men’s edition unveiled

The next day, the peloton will face the cobblestones between Lille and Arenberg, without going through the famous gap. Eleven cobbled sections will mark the stage, including five new ones, never used by the Paris-Roubaix or the Tour de France. The famous sector known as the “Gibus bridge” will be the last of the day. This stage could already eliminate riders from the general race, as in 2014 when Chris Froome had to retire after a fall on the cobbles. “Of the first five stages, there are at least three where runners can spend many minutes. With the borders in Denmark, the coasts of Cap Gris-Nez and Cap Blanc-Nez, and the cobblestones, the favorites will have to be attentive at all times so as not to lose the Tour “, sums up Christian Prudhomme.

The puncheurs at the rendezvous in Longwy and the Planche des Belles Filles?

On July 7, the riders will set off from Binche, in Belgium, towards Longwy, in Meurthe-et-Moselle, for the longest stage of the 109th edition, with 220 kilometers on the program.

A stage that should appeal to punchers, like Julian Alaphilippe, whose profile is reminiscent of that of the Epernay stage, in 2019, where the Frenchman had seized the yellow jersey. “This stage is hilly in the end, with the coast of Pulventeux then that of the Religious. We don’t do a route for a runner, but on the other hand, I claim that we do a route for a type of runner, like punchers. At the moment, we have three exceptional ones with Julian Alaphilippe, Wout van Aert and Mathieu Van der Poel “, comments Christian Prudhomme.

The battle for favorites in the Alps

On July 9, the runners will reach Switzerland with a stage between Dole and Lausanne, then between Aigle and Châtel, before enjoying a day of rest. They will then resume the road in the Alps, with a stage between Morzine and Megève on July 12, before attacking two days which should appeal to climbers. On July 13, they will face the laces of Montvernier, the Col du Télégraphe, the Col du Galibier and finally the Col du Granon, which rises to 2,413 meters. The Granon will only be surveyed by the Tour de France for the second time in history, after the passage of the race in 1986. 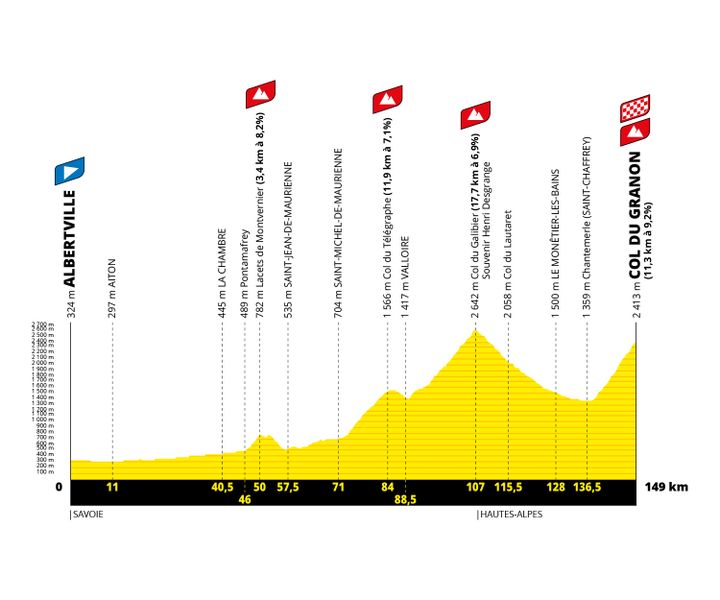 The profile of the 11th stage of the Tour de France 2022 between Albertville and the Col du Granon. (Amaury Sport Organization)

For the national holiday, July 14, the peloton will start from Briançon to join Alpe d’Huez. The runners will once again climb the Col du Galibier, then that of the Croix-de-Fer, before surveying the 21 laces of Alpe d’Huez for the first time since 2018. 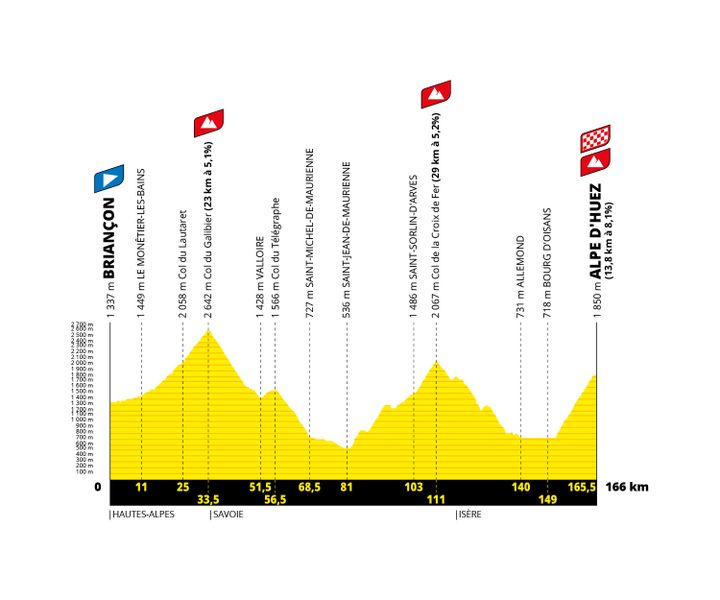 The profile of the 12th stage of the Tour de France 2022 between Briançon and Alpe d’Huez. (Amaury Sport Organization)

The Pyrenees as a highlight

After three flatter stages between Bourg-d’Oisans and Saint-Étienne, Saint-Andienne and Mende, then Rodez and Carcassone, as well as a day of rest, the runners will find the mountain in the Pyrenees. On July 19, they will join Foix from Carcassonne, passing through the Port of Lers and its 11.4 kilometers at 7%, then by the Mur de Péguère, with 9.3 kilometers at 7.9%.

They will then continue with two arrivals at the top, at the Peyragudes altiport, where Romain Bardet triumphed in 2017, then at Hautacam, at an altitude of 1,520 meters. On the course, they will cross swords in the Col d’Aspin, the Col de Val Louron-Azet, the Col d’Aubisque then in the unique Col de Spandelles, with its 10.3 kilometers at 8.3%. 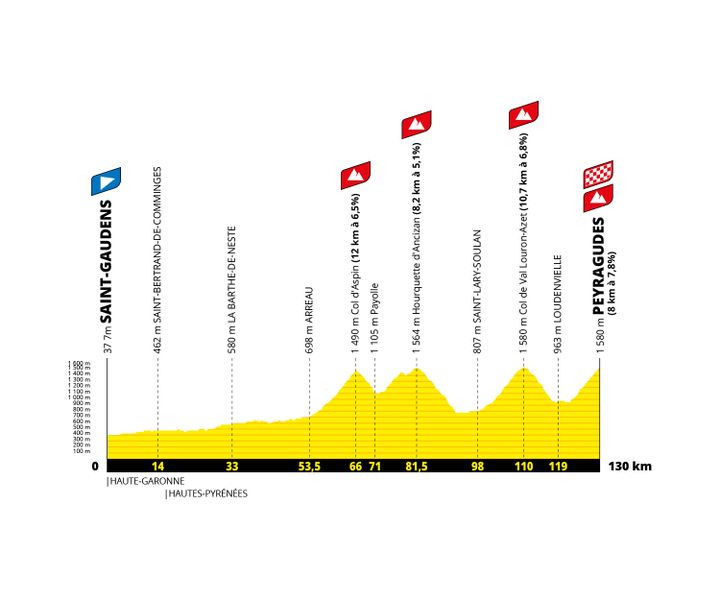 The profile of the 17th stage of the Tour de France 2022, between Saint-Gaudens and Peyragudes. (Amaury Sport Organization)

“These two stages are clearly made for the contenders for the final victory. They are short but involve successions of climbs, to end with very severe slopes. The champions no longer hesitate to start from afar, so there may be impressive raids and the terrain lends itself to reversals “, Christian Prudhomme analysis. 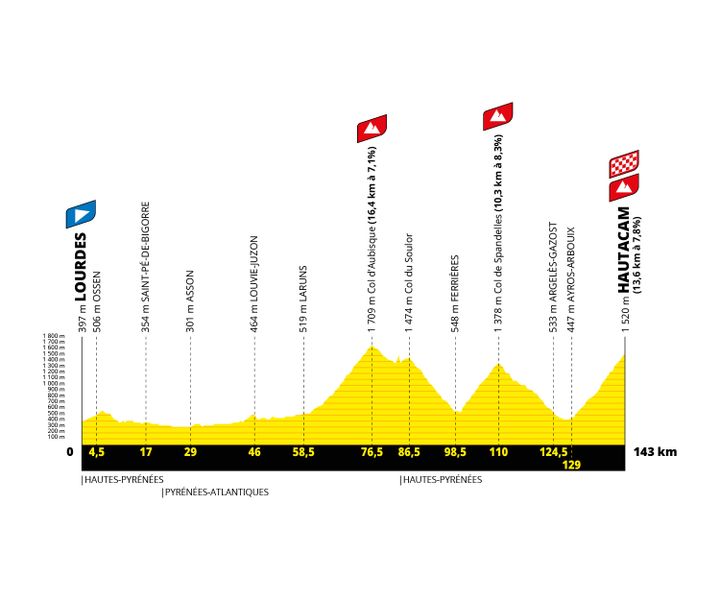 The profile of the 18th stage of the Tour de France 2022, between Lourdes and Hautacam. (Amaury Sport Organization)

The 19th stage of the Tour de France 2022 will link Castelnau-Magnoac and Cahors, before a final time trial comes to decide between the riders. On July 23, they will set off one after the other for 40 kilometers between Lacapelle-Marival and Rocamadour. The next day, they will join Paris for a final stage between La Défense Arena and the traditional finish on the Champs-Elysées.

One thought on “Tour de France 2022: from Denmark to the Pyrenees via the cobblestones and L’Alpe d’Huez … The route of the – Franceinfo”