Hockey Champions League – HC Slovan: Döme: We lag behind in everything – ŠPORT.sk 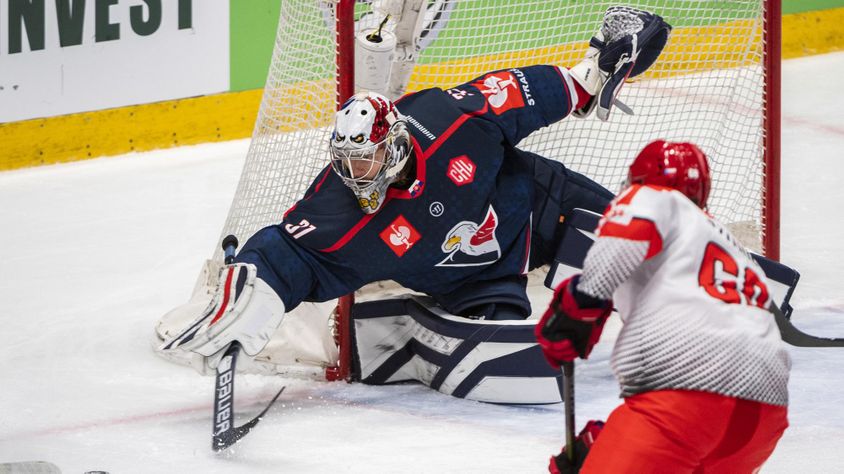 HC Slovan Bratislava hockey players have had their first year in the Champions Hockey League. They got into it thanks to the award of a wild card from the management of the competition, which needed to replace the Belarusian team Junost Minsk. He could not participate in the competition due to problems caused by the situation in the country.

Slovan Bratislava lost everything that was possible. He did not win in the Champions League …

The Slavs were in an attractive and difficult group. They met Swedish Leksand, Swiss Friborg and Czech Třinec. Although they played some quality matches, they ended up without a point.

Even before the start of the league season, they played against favorites from Sweden and Switzerland. They lost all four matches, as did the Czech Třinec and the progress of the group was clear before the last federal derby.

In mutual fights, in which it was only an honor, several young men on both sides were given space. However, the quality of Třinec was still evident, he won 3: 0 at home and 4: 1 in Bratislava.

“I am just happy with the result. We played very well in the first period, but we did not manage to score. In the second, we luckily pushed ourselves twice after the big mistakes of the Slavs, which helped us a lot. We took the lead 3: 0 and let the home team back into the game a bit.

They scored a goal, created another chance, but the goalkeeper held us back. In the third period, we checked the result, even though we complicated it with fouls. We deservedly won, which I am happy about, we will do better at home, “ evaluated the last duel of the group by the Czech coach Václav Varaďa.

Róbert Döme followed his words and acknowledged the quality of the opponent. “I will probably just repeat my colleague’s words. In the first period, Třinec was clearly better. In the second, unfortunately, we have made huge mistakes, which should not happen. However, I do not want to damn young boys, some are 16 or 17 years old.

It was a huge school for them to play the Champions League, even against such a quality opponent as Třinec. For all of us, it was a huge school and a demonstration of reality, where there is world or European hockey. Třinec deservedly won. “

However, neither coach was satisfied after the Champions League. Třinec clearly had progressive ambitions and Slovan did not imagine that he would end up without a point. “It simply came to our notice then. We played even matches with the advancing players. However, their quality turned out.

Then it was difficult to motivate the players for the next two matches, when we knew we could no longer advance. But they were quality meetings, whether in our country or in Bratislava. It also had a good atmosphere. Thanks to the people for coming. We believe that the players will learn from it and we will be a little better next season, ” evaluated Varaďa.

Head of HLM on peripetia with Banská Bystrica, a wild card for Slovan and plans …

Slovan’s coach reminded that even though they don’t have a point, they played quality matches. Especially in the first meeting in Sweden, they reached for victory. They won the first period 2: 0 and after the second they led by one more goal and it was valid five minutes before the end of the match. In the end, however, they lost 3: 5.

“It’s a little distorted. We played the first matches very well, especially the one in Leksanda. If we won there, we would still play in other teams today. The same goes for Třinec. It was unrealistic to proceed like this, ” revealed to the Dome why they had not boarded in full force.

“Overall, the Champions League for Slovak hockey and Slovan is a huge school for the future. We compare ourselves with top teams. I respect Třinec, it is an excellent organization in my opinion, it has been doing well for a long time, they play excellent hockey.

We must look at them first, then at the top of Europe. We can get there with time and hard work, but at the moment we and, in my opinion, Czech hockey are lagging behind the Swedish or Swiss leagues. ”

What did the Champions League show to the Slav coach? “It will open everyone’s eyes. The reality is here, at the moment we don’t have the same quality as during the KHL, when NHL players or top hockey players from Europe used to come here. We have to learn to work with it, get back quality players or build them so that we can work in the Champions League against harder opponents. It was a great school. ”

What did Slovan’s players lag behind the most? “In all. Especially in speed. Today Třinec, they are fast, they have an excellent counterattack. Also, the pace in the first match in Sweden, in my opinion, was not experienced even by the guys in the KHL. Even in Friborg, at speed, in one-on-one fights, physical funds … We have to work because we are behind them. It gave us a lot. At least me. I saw where we are, unfortunately, ” added the coach of Slovan at the end of the evaluation.

One thought on “Hockey Champions League – HC Slovan: Döme: We lag behind in everything – ŠPORT.sk”