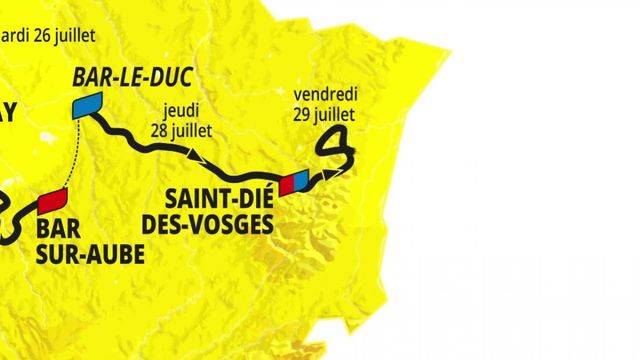 Newly appointed director of the Tour de France Women, Marion Rousse presented, Thursday, September 14, the route of the event which will be held from July 24 to 31, 2022. Twenty-three years after the last “Tour de France Féminin”, in 1989 , 132 runners will set off from Paris for eight stages in eastern France, finishing at the Planche des Belles Filles.

Franceinfo: sport: You were appointed director of the Tour de France Women at the end of last week, what does that mean to you?

Marion Rousse: It’s a challenge, but above all it’s a great honor. When we started discussing it, just the fact that they thought of me was a great honor. Then I saw myself years before, when I was a little girl and we couldn’t dream of doing the Paris-Roubaix or the Tour de France since it didn’t exist and we didn’t see cycling feminine on TV. Now that I have stopped my career, being in this project that we want to carry out over the long term is a challenge that I want to take up.

>> DIRECT. Tour de France 2022: follow the presentation of the route of the 109th edition

Cycling has given me so much that I owe him that much. When I was called, a few steps had already been drawn and luckily, because it was done months before. But I took part in the reconnaissance of three decisive stages, that of the white paths and those of the mountain.

What will be the major stages of this Tour?

The course has been designed so that we can retrace the historical side of the Tour de France, its present, and the future. We really wanted it to leave Paris for this handover with the men. For me, the first important stage is the one between Reims and Épernay, with a passage in the coast of Mutigny, where Julian Alaphilippe had escaped in 2019 and had gone to seek his first stage victory and the yellow jersey. The end of this stage will be difficult, with Mont Bernon and the finish in Épernay. It will be a first meeting for the contenders for the general classification, with a tricky stage.

The next day’s stage between Troyes and Bar-sur-Aube will be unprecedented, since it will take the white paths in the middle of the vineyards. There will be four white paths, for a total of 12.9 kilometers, with one difficulty before each path. These are difficult sections, never flat, always uphill or downhill, and you will need to be successful because there is more risk of punctures. Pressure and material level, there will be choices to be made. Then the fifth step between Bar-le-Duc and Saint-Dié-des-Vosges will be the longest, with 175 kilometers, twenty more than the course of the world championships. This will be the only difficulty of this course, since there is no listed pass that day, but we had to obtain a derogation from the UCI (Union Cycliste Internationale) to cover 175 kilometers.

The difficulties will be linked during the last two stages, in the mountains, a bit on the same pattern as Paris-Nice or the Dauphiné, where the hardest stages take place at the end of the event. We will end in apotheosis with a final at the top, the only one of this Tour, at the Planche des Belles Filles, and before that the Ballon d’Alsace, which is the first pass crossed by the Tour de France. The girls will already have a week of racing in their legs. Obviously this finish will be terrible, with 7 kilometers at almost 9% on average, never flat, sometimes percentages of 24%. Given the stage, it is a rider who will be well placed in the general standings who will win that day.

The route will therefore be confined to the east of France, why this choice?

We wanted to retrace a historical side by going to the Vosges. Then we leave Paris for an 8-day race so if we want it to remain consistent, sportingly speaking, we have to keep the mileage accessible. Men sometimes cover 200 kilometers on certain stages. For us girls, the average of the stages is more like 130 kilometers. It also prevents runners from making too long transfers between stages.

After the first Paris-Roubaix, women’s cycling returns to the Tour de France, is it a sign that this sport is growing rapidly?

Oui, he’s been growing up for several years now. Since I stopped my career, it has nothing to do with it. There are more and more men’s teams that have their own women’s team, there is more media coverage and therefore more budgets, and major renowned races appearing on the UCI women’s calendar. It shows that women’s cycling is evolving, maybe not at the pace we would have liked, but now we have this benchmark race in our hands. It’s a gem that needs to shine and I won’t let go anytime soon.

For a hearing before the Supreme Court with Tibor – Denník N

One thought on “Tour de France Women 2022: “The arrival at the Planche des Belles Filles will be terrible”, warns Marion Rousse, – Franceinfo”