Drama on government! VIDEO More quarrels over the budget: See which resort you do the best! – Topky.sk 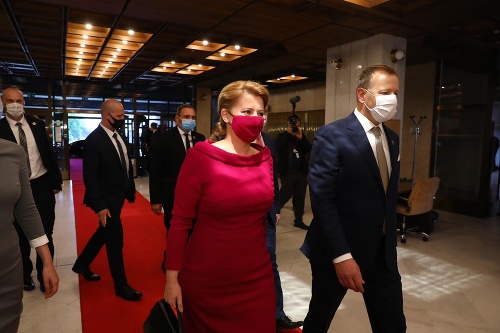 Slovak republic plans to invest in 2022 almost six billion euros, including resources from the recovery plan. Compared to the average from 2018 to 2021, the investment envelope will increase by about two billion euros next year, ie by almost 1.5 times. This follows from the draft public administration budget for 2022 to 2024, which was approved by the government on Thursday.

Offices of the President and the National Council of the Slovak Republic, as well as Government Office, should have a higher budget next year. By whom parliament and president should improve only slightly, the government office expects to increase spending by more than EUR 85 million.

Expenditure on area of ​​finance for 2022 represent 7.7 billion euros. It makes up the largest volume General treasury report (VPS), whose expenditure is budgeted at 6.2 billion euros.

The total expenditure of the Government Office for the following year is budgeted at EUR 155 million. The year-on-year growth is mainly due to the expenditure of the Recovery and Resilience Plan in the amount of EUR 123.8 million. These are to be used to fund research, development and innovation, to fight corruption for the National Implementation and Coordination Authority and for the Office for the Protection of Whistleblowers.

Total expenditure on Slovak healthcare should climb to a height of next year 6.38 billion euros.

To the area education, science, research and sport should go in 2022 more than four billion euros.

Ministry of Culture (MK) SR should have an amount at its disposal in 2022 at a level of almost EUR 425.5 million, which is approximately EUR 33 million more than budgeted for the current year.

Expenditure in the area the environment should be in 2022 more than EUR 815 million. Of this, EUR 213 million should be spent on the recovery plan. One hundred million euros should be expenditure from the modernization fund.

Ministry of Foreign Affairs and European Affairs (MZVEZ) SR should be available in 2022 more than EUR 154.3 million. The largest part, more than 78 percent of expenditures, goes to foreign policy.

Total expenditure for area agriculture are budgeted for 2022 in the amount of 1.25 billion euros.

Total expenditure Office for Health Care Supervision (ÚDZS) should climb to the next year EUR 23.9 million, of which the contribution to the Office ‘s activities is EUR 23.5 million.

National Institute for Health Value and Technology, ie the so-called The HTA agency should get into operation next year as a whole EUR 2.65 million.

On the energy should go next year EUR 285 million, which is a year-on-year increase of EUR 128 million compared to the expected fact this year. The increase in budget expenditures in this area was made possible by funding from the Recovery and Resilience Plan of Slovakia in the amount of 119 million euros.

To ensure original and transferred competencies should have towns and villages in 2022 the package available in total volume EUR 5.68 billion. The state is spending support from its next year’s budget least developed districts EUR 10.3 million.

Total expenditure on social area will be in 2022 in the amount of 13.4 billion euros, which represents 12.7% of gross domestic product (GDP) and more than a quarter of all general government expenditure.

Total budget expenditure public administration directed to the economy should reach next year 1.62 billion euros. They will be directed mainly to the area of ​​business support, energy and innovation, restructuring of industrial sectors, informatization, regional development and support of tourism.

For 2022 it is for all participants interdepartmental program Information Technologies from the state budget allocated together EUR 368 million.

At this point, the government approved the draft budget with one comment. According to Matovič, the proposal assumed a deficit of 4.94 percent of gross domestic product. Already the early statements of the ministers gave the impression that the coalition SaS was rebelling against this proposal.

The conditions under which quotas were introduced for Slovak music in radio broadcasting were completely different from those at present. Prior to the government meeting, Minister of Culture Natália Milanová (OĽaNO) said this in connection with the discussion concerning the abolition of quotas in the broadcasting of private radio stations. “It would also be necessary to look at whether the goal with which the quotas were introduced has also been met,” she noted.

The incoming leader of OĽaNO, Igor Matovič, as Minister of Finance, claims that his offer regarding the budget to coalition partners is still valid and reminds the state of the coalition agreement and whether the coalition partners “will fulfill what they have fulfilled”. According to Matovič, SaS scares by raising taxes and thus creates the famous straw dummy. It is a value of 4.94 percent, according to Matovič it is a done deal, only SaS, led by Sulík, is still protesting.

The Minister of Economy Richard Sulík (SaS) comments on the current events in the case of the private company Slovakia Energy, which is ending up on our market.

Minister of Education Branislav Gröhling (SaS) presents before the government meeting the percentage in case of positivity of pupils in schools due to the pandemic. According to him, schools will not close even in black districts.

The schools will continue with self-testing until the end of the year. “The distribution of self-tests will continue and we will contact the schools again,” said the Minister of Education. He pointed out that those parents who had not used this opportunity in the previous period will also be able to participate.

The social partners say no to the draft budget, the coalition is said to have an agreement

The social partners did not agree on the budget, the municipalities and trade unions had reservations. However, there is reportedly an agreement in the coalition on this proposal. However, the Minister of Finance Igor Matovič (OĽaNO) pointed out in advance that the final form of the budget for 2022 is conditioned by the approval of several important laws, namely on pension reform, on expenditure ceilings and on the debt brake. If the coalition does not agree on them and they are not approved, the budget deficit will not be 4.94%, but only 4.3% of GDP. The difference is around € 700 million.

The cabinet is also due to discuss draft budgets of several state institutions on Thursday, such as the Social Insurance Agency, the Slovak Land Fund and Eximbanka. Processes in the construction of motorways as public works should be optimized and accelerated. The Ministry of Transport and Construction (MDV) of the Slovak Republic wants to achieve this by amending the Act on One-Time Emergency Measures in the Preparation of Certain Construction of Motorways and Roads for Motor Vehicles. Together with the proposal for an abbreviated legislative procedure, it is submitted to the government for discussion.

They must also take care of the social facilities that they did in full, despite the first waves of the pandemic

The state should pay social services facilities (ZSS) and centers for children and families (CDR), respectively. their employees an infectious allowance of EUR 405 per employee who, at the time of the crisis, was working during the ordered quarantine measures at his workplace. This follows from the regulation from the workshop of the Ministry of Labor, Social Affairs and Family (MLSAE) of the Slovak Republic, which is also to be discussed by the government.

The Cabinet is also to approve an increase in the contribution to the International Visegrad Fund (MVF). From 2022, it is set to increase from eight to ten million euros, increasing each country’s contribution from two to two and a half million euros. The IMF serves to support grants, scholarships and residency programs in the fields of culture, science, research and education, and also supports cross-border cooperation and tourism development projects.

One thought on “Drama on government! VIDEO More quarrels over the budget: See which resort you do the best! – Topky.sk”