Presidential election 2022: followed by Eric Zemmour in the polls, Marine Le Pen believes that he “would make a good prime minister” 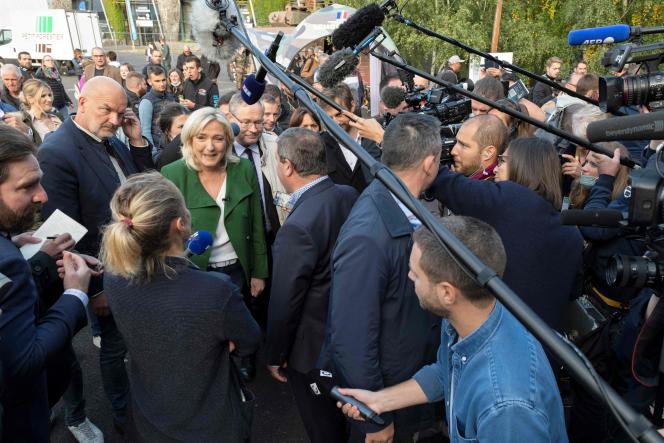 She still believes in her ability to access the Elysee Palace in April 2022. Marine Le Pen, the presidential candidate for the National Rally (RN), said she was convinced Thursday, October 14, on RTL, that she could and would “Win this presidential election”.

Asked about the fact that she was closely followed in the polls by the far-right polemicist Eric Zemmour in recent weeks – while he has not yet declared himself a candidate, Marine Le Pen confirmed his desire to go “ at the end of [s]a candidacy “. “I am convinced that I will be in the best position, the waltz of the polls and the horse race six months before the presidential election do not interest me and does not mean much”, did she say. “I can and I will win this presidential election. “

# Poll: “I’ll go all the way”, @MLP_officiel announced in #RTLMatin. “I am convinced that I will be the best… https://t.co/Qqwtqhaevh

According to her, Eric Zemmour “Would make a good prime minister, but it seems obvious to me that he does not want it”. “Given that we are making the same observations on immigration and insecurity, we will have to gather at one time or another”, she hoped, nevertheless regretting that her irruption created “Divisions” on the ability of the far right to win the presidential election. “For the moment, he may not be able to hear what I have to say to him, but we will wait a bit, I am patient”, added the far-right official.

Article reserved for our subscribers Read also Presidential 2022: Marine Le Pen, weakened in the polls, tries to display her “experience”

A “big project” to dismantle the wind turbines

Marine Le Pen also asked the government on Thursday not to extend the health pass until July 31, 2022. “The measures are no longer proportionate to the health situation. We cannot live in an exceptional rule of law permanently ”, she criticized.

Reacting to ads of the France 2030 plan presented Tuesday by the President of the Republic, Mr.me Le Pen said he wanted stop all new wind farm construction and start “A big building site to dismantle them”. She declared herself in favor of the construction of new EPR nuclear power plants at RTL’s microphone:

“The considerable subsidies that we grant to intermittent energy, wind and photovoltaic, it is between 6 billion and 7 billion euros per year. I am removing the subsidies; which will also make it possible to return to the French half of a tax they pay on their electricity bill. “

Six months before the presidential election, purchasing power is also establishing itself as one of the flagship themes of the campaign, while energy prices are soaring in Europe. The RN candidate recalled her proposal to modify the taxation on gasoline, gas and electricity, by reducing their VAT from 20% to 5.5%, to provide French households with a “Purchasing power shock”.

Mme Le Pen finally intends to release 16 billion euros through its measures against immigration, “Which consist in reserving family allowances exclusively for French people and subjecting a whole series of solidarity benefits to a waiting period of five years of full-time equivalent for foreigners”.

One thought on “Presidential election 2022: followed by Eric Zemmour in the polls, Marine Le Pen believes that he “would make a good prime minister””