In Lebanon, a demonstration against the judge investigating the explosion at the port of Beirut escalates – archyde 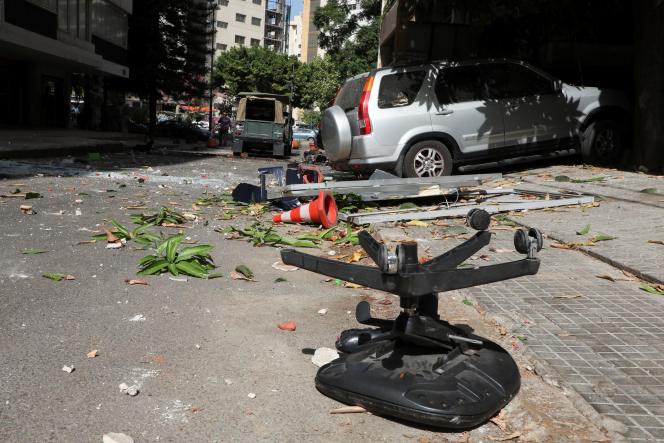 Bursts of automatic weapons, explosions, vehicles set on fire, photos of the US ambassador burnt… Shots were heard on Thursday October 14 in Beirut during a rally of hundreds of Hezbollah supporters and the Amal (“Hope”) movement to protest against the examining magistrate Tarek Bitar, who is leading the investigation into the explosion that occurred in August 2020 in the port of the Lebanese capital.

According to an initial assessment, the exchanges of fire left at least one dead and several injured. The victim was killed by a shot in the head and three of the eight injured are in critical condition, said Mariam Hassan, of the Sahel hospital, in the southern suburbs of Beirut.

The shots rang out as the procession passed through the Tayouneh neighborhood, located between the Shiite suburb to the south of the city and the courthouse where the rally was to end, and near the front line during the Lebanese civil war, from 1975 to 1990.

Lebanese Prime Minister Najib Mikati called for calm. In a statement, the head of government said he was following events closely with the army chief of staff to consider measures to be taken to control the situation. The army has been deployed to put an end to the violence.

The incident comes shortly after Lebanon’s Court of Cassation dismissed complaints by two former ministers against the judge investigating the explosion at the port of Beirut, allowing him to resume his investigations. Mr. Bitar was forced on Tuesday to suspend his investigation pending the verdict of this court, causing the most serious crisis in the Lebanese government since its formation last month.

The explosion on August 4, 2020 and caused by the storage without precaution of huge quantities of ammonium nitrate left at least 214 dead, more than 6,500 injured and devastated several districts of the capital. Blamed for criminal negligence, the authorities refuse any international investigation and are accused by the families of the victims and associations of torpedoing the local investigation.

Pro-Iranian Hezbollah and its allies demand that the examining magistrate be dismissed, accusing him of politicizing the investigation, while politicians refuse to be questioned by Mr. Bitar. On Tuesday, Bitar issued an arrest warrant against MP and former finance minister Ali Hassan Khalil, a member of the Shiite Amal movement, an ally of Hezbollah.

But he was immediately forced to suspend his investigation after new complaints filed by Mr. Khalil and another deputy and ex-minister of Amal, Ghazi Zaayter, whom he wished to question.

The case nearly imploded a stormy meeting of the government of Najib Mikati, formed in September after a political deadlock of almost a year, with ministers reporting to Hezbollah and Amal asking for the judge to be replaced, to which opposed other members of the cabinet.

Since taking charge of the investigation, Bitar has summoned ex-prime minister Hassan Diab and four ex-ministers for indictment. They never appeared before the judge, who also issued a first arrest warrant that remained unfulfilled against a former transport minister.

Judge Bitar resumed his work last week after an initial suspension of the investigation. Some fear that he will meet the same fate as his predecessor, Fadi Sawan, dismissed in February after the indictment of senior officials.

FC Barcelona – Valencia CF: Online broadcast from the 9th round of the Spanish La Liga – Športky.sk

Eruption in the Canaries: flights canceled on the island – franceinfo

One thought on “In Lebanon, a demonstration against the judge investigating the explosion at the port of Beirut escalates – archyde”