Drama on government! VIDEO Other quarrels over the budget: Sulík is the target of criticism, Remišová is already talking about the threat of a fall – Topky.sk 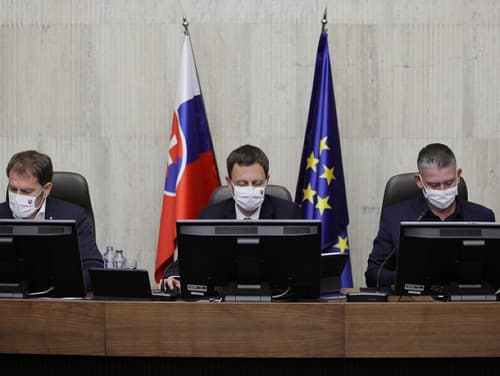 The incoming leader of OĽaNO, Igor Matovič, as Minister of Finance, claims that his offer regarding the budget to coalition partners is still valid and reminds the state of the coalition agreement and whether the coalition partners “will fulfill what they have fulfilled”. According to Matovič, SaS scares by raising taxes and thus creates the famous straw dummy. It is a value of 4.94 percent, according to Matovič it is a done deal, only SaS, led by Sulík, is still protesting.

The Minister of Economy Richard Sulík (SaS) comments on the current events in the case of the private company Slovakia Energy, which is ending up on our market.

Minister of Education Branislav Gröhling (SaS) presents before the government meeting the percentage in case of positivity of pupils in schools due to the pandemic. According to him, schools will not close even in black districts.

The social partners say no to the draft budget, the coalition is said to have an agreement

The social partners did not agree on the budget, the municipalities and trade unions had reservations. However, there is reportedly an agreement in the coalition on this proposal. However, the Minister of Finance Igor Matovič (OĽaNO) pointed out in advance that the final form of the budget for 2022 is conditioned by the approval of several important laws, namely on pension reform, on expenditure ceilings and on the debt brake. If the coalition does not agree on them and they are not approved, the budget deficit will not be 4.94%, but only 4.3% of GDP. The difference is around € 700 million.

The cabinet is also due to discuss draft budgets of several state institutions on Thursday, such as the Social Insurance Agency, the Slovak Land Fund and Eximbanka. Processes in the construction of motorways as public works should be optimized and accelerated. The Ministry of Transport and Construction (MDV) of the Slovak Republic wants to achieve this by amending the Act on One-Time Emergency Measures in the Preparation of Certain Construction of Motorways and Roads for Motor Vehicles. Together with the proposal for an abbreviated legislative procedure, it is submitted to the government for discussion.

They must also take care of the social facilities that they did in full, despite the first waves of the pandemic

The state should pay social services facilities (ZSS) and centers for children and families (CDR), respectively. their employees an infectious allowance of EUR 405 per employee who, at the time of the crisis, was working during the ordered quarantine measures at his workplace. This follows from the regulation from the workshop of the Ministry of Labor, Social Affairs and Family (MLSAE) of the Slovak Republic, which is also to be discussed by the government.

The Cabinet is also to approve an increase in the contribution to the International Visegrad Fund (MVF). From 2022, it is set to increase from eight to ten million euros, increasing each country’s contribution from two to two and a half million euros. The IMF serves to support grants, scholarships and residency programs in the fields of culture, science, research and education, and also supports cross-border cooperation and tourism development projects.

ASSE – SCO Angers (2-2): towards an increase in penalties after the incidents? – Goal! Football club

The opposition is recalling Sulík today. The reason is energy prices – Aktuality.sk

The manufacturer Tesla, boosted by an order of 100,000 cars, is worth 1,000 billion dollars – franceinfo

One thought on “Drama on government! VIDEO Other quarrels over the budget: Sulík is the target of criticism, Remišová is already talking about the threat of a fall – Topky.sk”