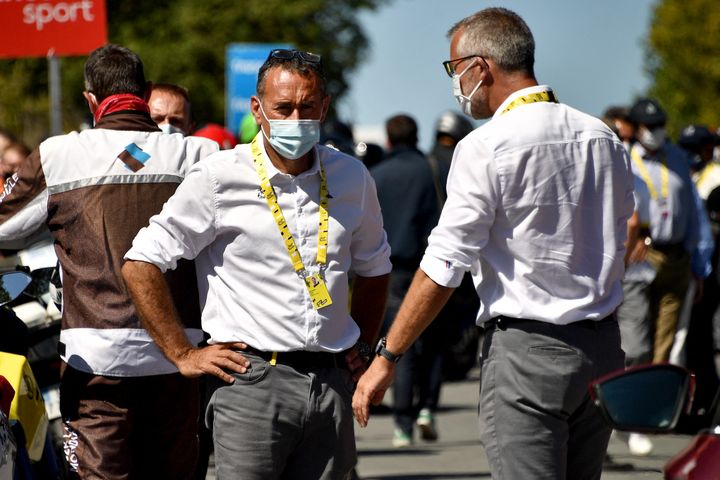 “Why is there no Alpe-d’Huez this year?”, “The North is still shunned!”, “This is the queen stage! No, this is the one ! “ Each year, the Tour de France route, unveiled Thursday, October 14, 2021 for the 2022 edition, ignites the discussions of cycling enthusiasts: some analyze it in detail to find out where the Grande Boucle will pass, others dissect it to position themselves judiciously along the roads and watch the gigantic convoy go by.

But how is this route constructed? Where do you start to draw a three week race? What obstacles stand in the way of the “tracers”? “Tracing the Tour de France is not a completely free exercise since we have constraints on the part of the UCI”, explains in the introduction Thierry Gouvenou, technical director of the events of ASO (Amaury Sport Organization) and right arm of Christian Prudhomme on the Tour de France. “Our route must be a maximum of 3,500 kilometers and contain 21 stages with two days of rest imposed. And we are entitled to only two stages of more than 240 km.” Here is for the elementary rules.

For the Tour, the organizer ASO chooses to strictly divide its process. “We will differentiate the big start linked to the first two or three days, which are prepared two and a half years in advance, with the rest. The 18 or 19 other stages, we will look at it fifteen months in advance. , continues Thierry Gouvenou. It is Christian Prudhomme who traces the backbone of the Tour from the very start: strengths, milestones … We let the current edition pass, then he will determine all the departure and arrival cities until the 15th. August. It is then that I come into play. Between August 20 and September 20, I trace all the stages. “

Once the main lines of the route have been considered, the organizers move on to the second stage of the design: plotting on a map. “On the specific stages, I have already looked upstream on software to see what that could give: Strava, but also Google Earth”, details Thierry Gouvenou.

Then comes the third step: the field recognition of the aforementioned steps, a key point in tracing to analyze the quality of the roads and the presence of dangers. An essential stadium, at a time when the safety of runners is more than ever at the center of attention: “Once I have plotted all my stages on a map, we go on reconnaissance and we take notes on an ASO software from km 0 until the finish: the dangers, crossroads, sporting points (intermediate sprints, supply, waste collection). It takes a long day to do a stage. All this work must be completed around September 25, about a month before the presentation of the Tour. When presented in October, it is good to 98%. “

He now trusts his experience: he wears this costume for the ninth time on the occasion of the Tour de France 2022, after twelve years in the peloton, between 1991 and 2002. “I am starting to have a good knowledge of French territory. Depending on the type of stage, I sometimes hardly need to go on the ground, especially in the mountains.”

Among the angry questions, that of political patronage comes up most frequently for the organizers: hosting the Tour de France is an immense showcase for a region, a department or a city, not to mention the gigantic fallout that trickles down to the local economy, requested to house or feed such a mobile juggernaut.

Among the angry questions, that of political patronage comes up most frequently for the organizers: hosting the Tour de France is an immense showcase for a region, a department or a city, not to mention the gigantic fallout that trickles down to the local economy, requested to house or feed such a mobile juggernaut.

With ASO, Thierry Gouvenou ensures that it is not the chosen ones but the beauty of the “Tour de LA France” which sometimes dictates his choices. “We try to visit each region regularly, even if it is more difficult in the North-West. It is at this level that there is a real political dimension. What will also influence my choice, it is is the aesthetic side: when you cross the Pont du Gard or if you go around the city of Carcassonne, it is not by chance, specifies the technical director of the ASO events. The landscapes are the main asset of bike racing: if there is no audience, there are always things to look at. “

If the temptations related to political and economic connections may have influenced the course of the race, much less abstract elements have come in recent years to upset many outlines. Speed ​​bumps, roundabouts, zone 30, directional islands, narrowings, the French roads combine the road improvements which are as many potential traps for the runners, and therefore the organizers.

“For us, it’s a scourge. It becomes more and more difficult to find places of arrival in the cities. If it has to happen in the sprint, it takes two kilometers without urban planning, and it becomes more and more delicate, because cities are more and more equipped to slow down “, regrets the one who joined ASO in 2004 and which must bring its share of massive sprints to each edition of the Tour.

Each year, the organizers finally manage to ignore all the constraints inherent in the cycle race. As soon as the edition is finished, however, we have to look at the next one and renew ourselves, while avoiding reproducing past mistakes.

Always a follower of new playgrounds conducive to spectacle and gaps, Thierry Gouvenou remembers a failure during the 2018 edition. “We had bet a lot on a big cobblestone stage which arrived in Roubaix [la 9e étape remportée par John Degenkolb]We made the mistake of positioning her too late in the Tour, and there had been no gaps until then. This is where we realize that the placement of the steps is extremely important “, he recalls.

The organizers are also trying to avoid any unnecessary fear for the runners after the deaths of Wouter Weylandt (2011), Antoine Demoitié (2016) or Bjorg Lambrecht (2019) following shocks in the race. “There are places where you don’t feel like going, like the descent of Portet d’Aspet [où Fabio Casartelli s’était tué en 1995 et où Philippe Gilbert avait été victime d’une chute effrayante en 2018]. She scares us a little, admits Romain Caubin. Sometimes I don’t sleep the day before a stopover! There are also places where we realize that it is more dangerous than during recognition. But it is often the opposite scenario that occurs: we think it will be hot, and often it goes because they are acrobats! “

How do you manage to find new routes every year, when the Tour has existed since 1903 and the Route d’Occitanie was created in 1977? “We have other events like the Dauphiné, we had the Tour de l’Avenir. We also look at what our colleagues are doing in the regions”, explains Thierry Gouvenou. “We are also offered things. During the stage of the Tour 2019 where Julian Alaphilippe takes the yellow jersey in Saint-Étienne, there are climbs that were offered to me on Twitter. We also have letters from cyclists or elected officials, such as the Col du Pré which will be used this year. The Glières plateau, these are the local elected representatives, the Col de la Loze was the resort of Méribel… We have a whole network which means that we are on the lookout for a lot of things “, welcomes the “traceur du Tour”.

There remains one last parameter that the organizers cannot control in advance, and it is not the least: it is the runners who do the race, even if the layout sometimes indicates almost black and white where you have to attack to win. As such, all tracers must combine their desires with version 202 cycling. “The way of running has changed a lot: all the teams recognize almost all the stages, they film everything and know in advance what can happen. There is no longer this unforeseen aspect that there could be there is twenty years old. It makes it very difficult for us “, notes Thierry Gouvenou with bitterness.

He who experienced the “Sky years” (2012-2018), when the British team padlocked all the mountain stages, wishes to avoid this kind of indigestible scenarios for the public. “We realize that the most spectacular stages are those which will have a lot of changes of pace, and not those with long passes. This is due to the new way of running: on long passes, the runners now go up with the power sensors, and no one risks getting into the red. The dream would be that they would be forced to take the steps without knowing them. But that is totally illusory. “

One thought on “Michelin map, location, layout, street furniture … In the manufacturing secrets of the Tour de Fra course – franceinfo”