They record the occurrence of Havana syndrome at the US Embassy in Colombia – SME.sk 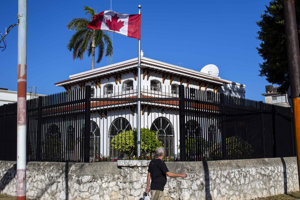 Symptoms of the syndrome were reported by more than ten workers.

BOGOTA. The US authorities are investigating the possible occurrence of cases of so-called Havana syndrome among US Embassy staff in Colombia. The BBC reported on Wednesday on its website.

Symptoms of the syndrome have been reported in recent weeks by more than a dozen embassy staff and their families, the station said. CNN with reference to an unnamed US official familiar with the situation.

The origin of this mysterious health problem is unknown, and there has been speculation that it is caused by electronic weapons. People who claimed to have had the syndrome complained of headaches, dizziness, and concussive symptoms. In several cases, their condition required several months of treatment.

US Secretary of State Antony Blinken plans to visit the Colombian capital Bogota next week.

State Department spokesman Ned Price has so far refused to comment to the media on both Blinken’s trip to Bogota and the alleged occurrence of Havana syndrome at the US embassy.

The first cases of the occurrence of this syndrome were recorded in 2016 at Cuba. Since then, other cases have been reported from other countries, including Russia, China and Austria.

Both the US and Colombian governments have reported that they are investigating the latest alleged occurrence of the syndrome.

One thought on “They record the occurrence of Havana syndrome at the US Embassy in Colombia – SME.sk”