The worst will not go away: These DISTRICT are probably waiting for the strictest measures! Fitká or weddings get a stop sign – Topky.sk 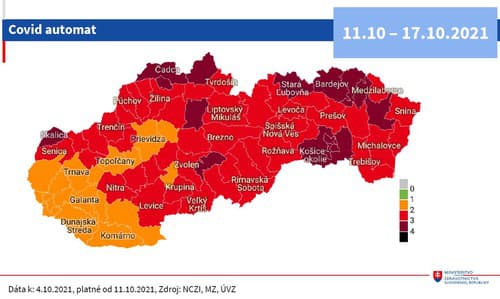 At least four districts avoided the worst phase last week. In the districts of Stará Ľubovňa, Námestovo, Svidník, Bardejov and Čadca, the positivity based on PCR tests was more than 25 percent and in another 38 districts there was a very high level of community coronavirus spread. The head of the Institute of Medical Analyzes, Matej Mišík, said that it was probably not possible to capture all the positive cases.

VIDEO There is a high level of community distribution of COVID in dozens of districts: Weddings and celebrations are the reason for the deteriorating situation

Four districts have so far avoided the worst phase

This week we have 16 burgundy districts and not one green. The classification into individual grades according to the COVID machine is governed by the seven-day incidence, the positivity of PCR tests and the number of vaccinated over 50 years of age. While four districts avoided the worst phase last week, this week is unlikely to be the case. As the regional hygienist Xénia Lukáčová stated for Topky, does not preclude stricter measures set out in black color at the time of the emergency epidemiological situation.

Slovakia will probably have the first black districts

If the districts got into the black phase, it would mean the introduction of the strictest measures within the COVID machine. The only thing that will not be limited yet is movement. To do this, the government would have to accept the state of emergency again, and according to the latest statements of the Minister of Health Vladimír Lengvarský, it is not on the table yet.

All districts also sent an assessment of the epidemiological situation this week, together with a justification, to the Ministry of Health, which will decide today on the government on the final division of the districts for this week.

So what awaits the districts in the black phase?

Regarding upper airway overlap, a respirator will be mandatory in the interior. You will also have to protect yourself outside, with a drape required on the outside. Mass events they will only be able to be fully vaccinated, even up to 100 people under strict anti-epidemiological measures, with the organizers having to keep a list of participants. The same goes for worship with the difference that they will be able to take place in the OTP regime (vaccinated, tested, those who overcame COVID-19, max 1 person per 15 m2) and the base (max 1 person per 25 m2 + mandatory list of participants).

Weddings, karyas, celebrations or fitness will get a stop sign

But it will be worse with weddings, caravans, celebrations or parties. As this is a high-risk activity, they are completely banned in the black phase. It is different in the case of ceremonies such as marriage, baptism, funeral, etc., which will be governed by mass events in the case of completely vaccinated, as far as OTP regimes and the base are concerned, a maximum of 6 people will be able to participate, except for funerals.

However, they will get a full stop fitness, wellness, water parks and spas. Regarding swimming pools and swimming pools, they can also be open only to fully vaccinated, for a maximum of 10 people, with organized groups governed by a sports machine. It won’t be easy either restaurantswho will not be able to let anyone into the interior in the black districts. In all three regimes, only window sales are allowed and delivery is maintained.

How districts avoided the black phase …

Each regional public health authority may send a proposal each week stating whether or not they agree to the inclusion. The districts of Bardejov, Čadca, Stará Ľubovňa, Svidník and Stropkov thus avoided the black phase this week. Why?

In Bardejov, a group of children decided in particular

Source: Topky, Ministry of Health of the Slovak Republic, Data without pathos

“The most positive tests were in the age group 10 – 14 years, 15 – 19 years. and 35 – 44 years, while the children were without clinical signs, resp. with a mild course of the disease, ” the hygienist clarified. The situation is stable in the hospital and the number of trips was lower. “According to information from NsP Bardejov, the current situation in the hospital was stable,” she added.

In Kysucie they assess positivity regardless of the form of tests

While the Bardejov district avoided the black phase mainly due to a group of children, the situation in Čadca is different. In addition, regional hygienists include positive cases on the daily basis, regardless of the form of the test, ie they do not follow only the positivity based on PCR tests.

Čadca is probably waiting to be switched to the black phase

“The fact that the increase in positivity in the previous period almost in four weeks, people were largely actively sought out and isolated, it was also taken into account when assessing and determining the color scale when classifying, ” she stated. In addition, other factors are taken into account – the incidence trend, age-specific dynamics, positivity according to the structure of persons, thorough assessment of outbreaks, their nature and the like.

VIDEO Clients and employees of ZSS can now report for the 3rd dose, said Minister of Labor Krajniak

According to Lukáčová, the character of the epidemics in the districts of Čadca and Kysucké Nové Mesto can be assessed as smaller epidemics. “But again with an important finding, namely proving the source of the infection – family celebrations, sports events – football clubs, schools, smaller family epidemics, ” she stated. In both districts in the monitored and evaluated indicators in the period over the last four weeks, the deteriorating trend has been gradual. “Likewise, the numbers of positive people have a gradually increasing tendency, certainly not by leaps and bounds.” clarified.

Compared to the previous cases, they increased slightly, but this is not a jump. “I am pointing to the fact that both districts were only in one calendar week, ie 39th calendar week in red and subsequently from the 40th week, following the assessment of the situation, they were reclassified into burgundy, where anti-pandemic measures are significantly tightened, “ Lukáčová wrote, stating that it did not exclude the stricter measures listed in the black color at the time of the emergency epidemiological situation.

The situation is seriously complicated by the low increase in the number of people vaccinated according to age groups in the district of Čadca and Kysucké Nové Mesto, which has a significant impact on the deterioration of the epidemiological situation. “I consider it extremely important to continue to promote the COVID-19 vaccination, which I consider to be the most effective tool for protecting public health,” she added.

As for Svidník, the hygienists took into account in particular the fact that Svidník is a small district, so the increase in morbidity is very significant even with a small number of diseases. “We took into account the weighted incidence with a reduced factor in children under 18 years of age to take into account the lower risk of hospitalization. We recorded the spread of COVID-19 mainly in school groups, from where the disease spread to families, “ Helena Hrebeňaková, regional hygienist for the Svidník and Stropkov districts, told Topky.

Because they have low vaccinations, whole families have become ill. “We had the outbreaks caught quickly. We perform epidemiological investigations within 24 hours of receiving the result. RÚVZ in Svidník comprehensively assessed the epidemiological situation and proposed to keep the district of Svidník in burgundy from October 11, “ she added.

Positive students and employees are increasing in the Stará Ľubovňa district

The last district that avoided the black phase so far was Stará Ľubovňa. Despite the fact that last week they registered 89 cases more than in the previous week, they decided to leave the district still in the burgundy phase. “RÚVZ SR based in Stará Ľubovňa continues to closely monitor the epidemiological situation in its territorial scope, evaluates its development on a daily basis and, depending on that, re-evaluates the adoption of the necessary anti-epidemic measures at the local level.” said the office in last week’s review.

They recorded an average of about 35 to 40 cases of coronavirus per day. “Currently, there are only isolated cases in the outbreak in the village of Šarišské Jastrabie. We record a more significant increase in the number of cases in the villages of Kamienka and Veľký Lipník, where the reason, as well as in the whole district, is an increase in the number of positive pupils (79 cases) and employees in the subsequent spread of the disease in families. Family spread is often associated with an average of 5 or 6 cases, ie the whole household, ” The Office assessed that vaccination coverage in the district had increased only slightly, by one percent.

One thought on “The worst will not go away: These DISTRICT are probably waiting for the strictest measures! Fitká or weddings get a stop sign – Topky.sk”