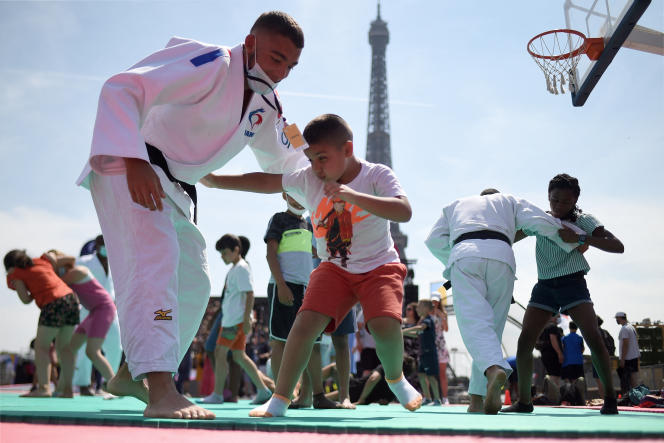 Let 5,000 sports fields emerge: Emmanuel Macron launched his grand three-year plan for sport in France. The President of the Republic is to announce Thursday, October 14, during a trip to Seine-Saint-Denis dedicated to the Olympic and Paralympic Games to be held in Paris in 2024, a financing plan for 5,000 local sports facilities over three years to strengthen the place of sport in society and make France “A sporting nation”.

Rather than financing large stadiums, swimming pools or gymnasiums – expensive infrastructures -, the presidential plan provides for giving priority to the creation of 1,000 multisports grounds, 1,000 dojos and combat sports halls, and 500 basketball courts. 3 x 3, 500 padel courts, 500 “skate parks”, or even 200 mobile sports sites – including swimming pools – as close as possible to French people’s homes and places of work.

An example : “The plan will be able, in the ground floors of buildings, in particular social buildings, to support the transformation of vacant rooms [comme d’anciens locaux commerciaux] in a dojo and combat sports hall “, explains a relative of the president. The distribution of equipment was made according to the production capacities of each federation concerned, we are assured on the side of the Elysee.

“Go fast and adapt to needs”

The priority beneficiaries of this plan, whose distribution of funds will be entirely managed by the National Sports Agency, will be communities affected by sports desertification or lacking sports infrastructure, such as the city of Marseille or the department of Seine- Saint-Denis, where the lack is particularly felt. After identifying the needs identified by the federations, the French National Olympic and Sports Committee (CNOSF), the French Paralympic and Sports Committee (CPSF) and players in commercial sports leisure – such as private sports halls -, the State undertakes to support, through flexible study and financing procedures, at least 50% of the cost of these new local sports equipment (up to 100% overseas). “The idea, are we moving towards the Elysée?, is to go quickly and adapt to the needs of each territory through easily mobilized credits. “

Good but can do better, believes Régis Juanico, who describes the presidential plan as simple “Catching up”, after the disengagement of the State at the start of the Macron five-year term. “It’s a plan that should have been launched much earlier, in 2018, and not just three years before the Paris Games”, regrets the deputy of the Loire (related PS).

Emmanuel Macron will have the opportunity on Thursday, during his visit to Tremblay in a new “city stadium” (multisports ground), to convince the representatives of the sports world (CNOSF, CPSF) and the presidents of four federations (basketball, handball , judo and tennis) that it is not too late to embark on the final sprint. There are a little more than a thousand days left for the President of the Republic before the opening of the Games to succeed in his sports revolution.

Read also: After the disappointment of Tokyo, more resources for “medal-winning” athletes for the 2024 Olympics in Paris

Presidential 2022: there will be no need for a health pass to attend political meetings – BFMTV.COM

ŠKF Sereď – MŠK Žilina: Online broadcast from the 12th round of the Fortuna League – Športky.sk

One thought on “Paris 2024: Emmanuel Macron wants to build 5,000 local sports fields before the Olympics – archyde”