They prefer to commit suicide. The Squid Game series showed the reality of indebted Koreans – SME.sk 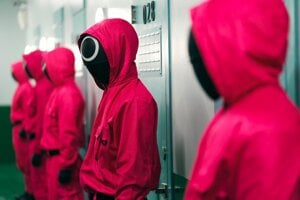 The bloody series was inspired by social inequality.

SOUL, BRATISLAVA. They can apply for free and the winner can get up to 45 billion won (32 million euros). The problem, however, is that most of them will die in the competition.

In the South Korean series Squid Game, many participants are willing to make this sacrifice – they are in a desperate financial situation.

The Squid Game series became the most watched new series on Netflix in history this week – 111 million accounts watched it on the streaming service in the first 17 days.

Many participants in the bloody game for millions have hundreds of thousands of debts and are being persecuted by the police and credit unions in ordinary society. The series draws on reality – despite the fact that South Korea is one of the most developed and richest Asian countries, more and more young people have trouble finding work and older generations are drowning in debt. What does Squid Game draw from?

They preferred to commit suicide

Ki-hun, the main character of the Squid Game series, is addicted to gambling, has no permanent job and relies on loans from usurers and his mother’s savings. Before getting into a desperate financial situation, he had a stable job at the fictional carmaker Dragon Motors.

His character is based on the real story of thousands of South Koreans who really found themselves in a similar situation. In 2009, Ssangyong Motors went bankrupt and about 2,600 people lost their jobs.

Series creator and director Hwang Tong-hjukch admits that he was inspired by this very event to create a “character who represents these people.”

One thought on “They prefer to commit suicide. The Squid Game series showed the reality of indebted Koreans – SME.sk”