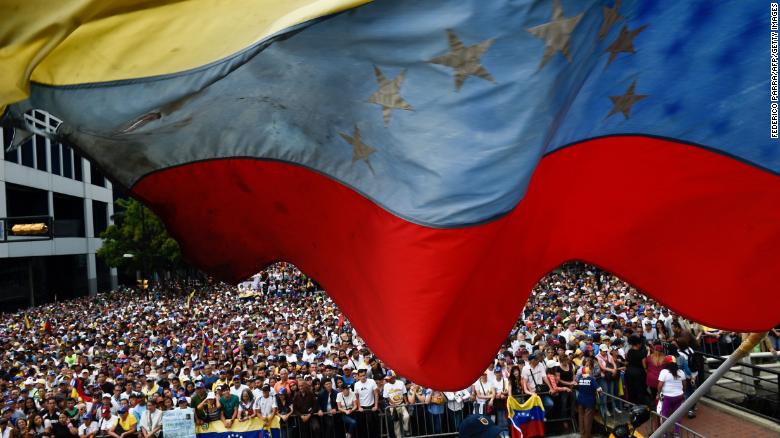 Tension between Venezuela and the EU representative 2:40

(CNN) – The European Union (EU) risks angering its most important ally next month, after the bloc agreed to send a team to watch the Venezuelan elections, which will take place on November 21.

The vote comes after three particularly chaotic years in the country, where the questioned President Nicolás Maduro he has managed to stay in power despite a collapsing economy, a contested 2018 election result, and US-backed efforts to remove him from power through coordinated Western sanctions, all of which involved the EU.

However, earlier this year, the bloc abandoned its recognition of Maduro’s opponent, Juan Guaidó, as legitimate president, putting him at odds with the US, which still recognizes Guaidó.

In some corners of the US, this has raised concerns that, by sending a delegation to the country for the first time since 2006, the EU is lending legitimacy to a process that will ultimately be won by Maduro, an often strong leader. described as a dictator.

A Venezuelan national flag flies during a mass demonstration of the opposition against President Nicolás Maduro in which the head of the Venezuelan National Assembly, Juan Guaidó (out of frame), declared himself “interim president” of the country, on the anniversary of a 1958 uprising that overthrew a military dictatorship, in Caracas on January 23, 2019.

Andres Oppenheimer wrote in the Miami Herald last week that for the past 16 years, “the EU had refused to send electoral observation missions to Venezuela mainly because it considered, with good reason, that the elections there were a sham.”

And he concludes that on election night “the EU mission will probably announce that there were no major irregularities, and an ecstatic Maduro will claim that he won a fair election. And several months later, when the EU mission publishes its final report in whoever analyzes the entire electoral process and concludes that it was not a fair race, the elections will have fallen into oblivion. “

Diplomatic sources confirmed to CNN that this is not just a columnist’s fear, but that there are very real concerns that Maduro, whatever the EU’s intentions, will be able to make this work to legitimize his grip on power.

Why would the European Union be willing to do this and risk the wrath of its most important ally?

First, sources in Brussels refute the idea that this will give the elections a de facto seal of approval from the EU. They say their agreement is based on the fact that the Venezuelan National Electoral Council invited a delegation. Brussels then sent a mission to see if the elections could be monitored “according to the 2005 UN guidelines,” an EU official said, noting that the bloc had not recognized the elections held in the country last year. “We are going there not to legitimize the regime, but to see what is happening.”

Second, the official states that “there is no difference in the way we monitor Iraq, Peru, Pakistan or Mali. This is one of the most recognized election observers in the world and if our partners ask us, we will explain our logic. No we have to justify ourselves to no one. “

It is certainly true that electoral monitoring groups frequently operate in and report on elections that are far from free or fair. For example, in 2017, the Office for Democratic Institutions and Human Rights of the Organization for Security and Cooperation in Europe, a highly respected organization, delivered a scathing report on the Turkish independence referendum.

However, critics might argue that the context here is different. Turkey is an ally of NATO and its democratic standards have been on the wane for years. This was documentation of that decline, which angered President Recep Tayyip Erdogan.

What is different is the comparative isolation of Venezuela with the West. It is debatable that even if the EU returns a very critical report, its mere involvement in the process could be used as propaganda by Maduro.

A State Department spokesperson told CNN that the United States “believes that free and fair local, National Assembly and presidential elections are essential for Venezuelans to achieve a peaceful and democratic solution to the crises facing their country. held jointly with the US on June 25 and August 14, the EU and Canada made it clear that they share our views … For further questions about the EU’s planned election observation mission, we refer you to the EU officials “.

These kinds of tensions between Brussels and Washington are, to some extent, unavoidable, as the EU tries to increase its influence as a differentiated world power and defender of Western values, rather than being an extension of American influence.

However, the bloc must remember that whenever it deviates from US policy – be it in regards to China, Russia or Venezuela – it will be noticed by the leaders of the nation that it still rises above all else. on the world stage.

Age of Empires IV: our impressions of the revival of a cult license

To Bratislava from Košice finally by highway, Hungary opened the section near Miskolc – Aktuality.sk