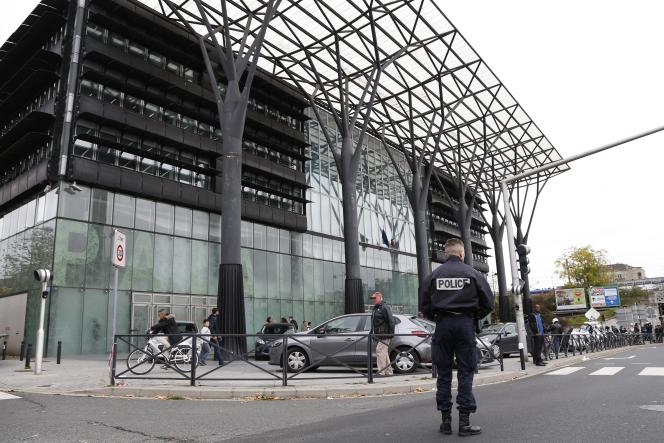 In contrast to the two police officers who surround him, Yassine B. seems slim when he enters the box of the accused of the judicial court of Melun, dressed in black jogging with orange bands. The young man, just over 18, looks quite frightened in front of the audience of journalists who came to attend his hearing in immediate appearance, Wednesday, October 13.

Friday it was more faraud when, filmed by mocking classmates, he tried to come out in force from his course at the Jacques-Prévert vocational high school in Combs-la-Ville (Seine-et-Marne), facing his teacher who opposed it. In the short footage that went around social media, we see him pulling violently on the door handle, causing Mr.me D., to the laughter of many of the students.

Read also In Combs-la-Ville, a teacher files a complaint after being assaulted by a student in a high school

The 66-year-old business professor suffered six days of total incapacity for work (ITT). “Very shocked by the aggression and the dissemination of the images”, according to his lawyer, Me Kheops Lara, this teacher “One year from retirement”, is not present at the hearing. She hesitated to file a complaint, before finally following in the footsteps of the rectorate and the principal of the high school. “The first question she asked me was: “What is he risking?” She loves her job, she loves her young people. I don’t know if you deserve it ”, tance Me Lara.

When questioned, Yassine B. confirms the trivial reason for this attack: with several other students, he “Disturbed the course a little”, he stammers, “By uttering animal cries”. Which ? “I couldn’t tell you, normal screams.” “ “Normal”, corrects the president, who notes that Mr.me D. is of West Indian origin and is trying to find out if the students imitated the monkey. The teacher sends him out into the hallway to calm him down. But Yassine has left a portable speaker on his desk, which goes off several times.

Mme D. then grabs the object and tries to find out who is setting it in motion from a distance. What annoys the high school student, who then returns to the class and takes his hands. Mme D. sends another student to find a supervisor to retrieve the disruptor. But Yassine B. refuses: he wants to return to the corridor. He faces his teacher who blocks the door, and ends up pulling violently on the handle, causing him to fall.

“It’s my fault from A to Z, I’m aware of it”, recognizes the young man, who wrings his hands and swings in the box. “How old is your mom?” “, asks the president. “What about your grandmother?” “ Yassine B. has a sob. “Quite old, over 60 years old”, he replies. “You piss her off, to that teacher, what did she do to you?” ” ” Nothing in particular “, stammers the young man. “It pissed me off, I’m basically repeating myself, I didn’t want to have problems with a speaker. “

You have 40.03% of this article left to read. The rest is for subscribers only.

ASSE – SCO Angers (2-2): towards an increase in penalties after the incidents? – Goal! Football club

The opposition is recalling Sulík today. The reason is energy prices – Aktuality.sk

The manufacturer Tesla, boosted by an order of 100,000 cars, is worth 1,000 billion dollars – franceinfo

One thought on “Combs-la-Ville: the high school student who jostled his teacher sentenced to five months suspended”