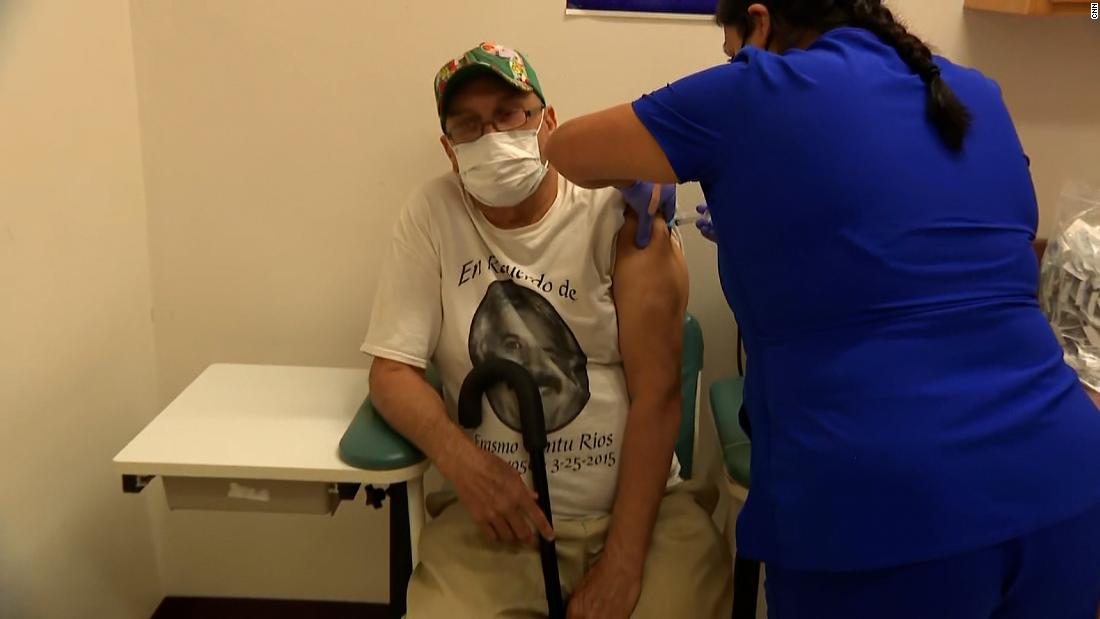 Doubts about the covid-19 vaccine for your young children? 1:51

(CNN) – There is a titanic effort to ensure that the most vulnerable are vaccinated across the United States. Transportation, translation and a reliable source of vaccine information have been some of the obstacles, but public health workers and a new initiative are working to overcome them.

The El Milagro clinic in McAllen, Texas has played a crucial role in ensuring that patients receive the correct information about the vaccine and keep their appointments.

Retired worker Zeferino Cantu is diabetic, has high blood pressure and does not have health insurance, but he waited months to get vaccinated. He finally got his first injection at the clinic last week because he’s more concerned about the virus than the side effects of the vaccine.

Speaking in Spanish, Cantú told CNN that the coronavirus is more dangerous because it can affect everything, including mental capacity.

The South Texas Clinic is one of 100 free and charity clinics in 16 states that have received a financial boost from the Finish Line Project. The aim of the initiative is to get one million “difficult to vaccinate people” to have access to the vaccine. Since the initiative’s launch in June, more than 115,000 people have been vaccinated, according to Joe Agoada, CEO of Project Finish Line and Sostento.

South Texas, a region with a predominantly Latino population, has been hit hard by the pandemic. And nationally, Latinos have been among the most affected as well, but they have been vaccinated at much lower rates than white Americans. When the COVID-19 vaccine was initially approved, some Latinos were skeptical and worried that it would make them sick.

Zeferino Cantu being vaccinated after months of uncertainty.

At the beginning of the vaccination rollout, only a small percentage of vaccine providers were in Latino-majority zip codes in Texas. There are fewer providers in rural areas, leading some Texans to drive long distances to get vaccinated.

The importance of deep community ties

Sylvia Aguilar knows Cantu, the retired worker, very well. “He always told me that he would return. I will return, I am not prepared,” says the administrator of the El Milagro clinic.

Several months later he returned, as the city, already badly affected by the pandemic, has seen an increase as in other parts of the US by the variant of the delta.

Families are getting sick and scared, Aguilar says. They do not know where to turn, a common obstacle here to vaccinating those who need it most.

The US Department of Health and Human Services estimates that about 44% of those who resist vaccination are persuasive, but even they can be difficult to convince.

“I wanted to see the reaction of other people before getting vaccinated,” says Juan Manuel Salinas. “If it was okay with them, then I would.”

Are we there yet? Check out this campaign from the American Academy of Pediatrics 0:35

Salinas just got his second chance. And although the racehorse trainer’s 55-year-old daughter worked at the clinic, it took months to convince her father to make an appointment and keep her.

“He had all the resources. I would tell him, ‘Do you want me to pick you up? We do it for free here at the clinic and he would say’ yes, I’ll go ‘. I’ll go,'” says Bree Salinas, his daughter and financial manager at the clinic.

A mission to vaccinate a million people

In June, the Finish Line Project was launched by Sostento. The non-profit organization was founded in 2019 to address the opioid crisis and serve underserved and disadvantaged communities. The organization joined the pandemic response last year to help with access to care and testing.

“What we hope to achieve is access to the vaccine for those who are on the sidelines,” says Agoada. “I call them ‘the unvaccinated, but willing.’

In some communities, concern about getting vaccinated is not related to the vaccine itself. Some common reasons are lack of transportation and fear of missing work.

Agoada explains how the nonprofit partnered with a Georgia poultry plant to create a pop-up clinic. Workers were able to get vaccinated on a Saturday and could take Sunday off if they had side effects such as fatigue.

The initiative also provides money for emergent vaccinations in rural places like Muñiz (Texas), telephone lines for outreach in the community and even helping to organize free trips provided by Uber.

“We hear about individuals who take the bus to and from work every day and can’t take a day off and really need help with that transportation barrier,” Agoada says. And for clinics like the one in McAllen, persistence and patience are best.

“There comes a time when the staff feels like a broken record,” says Marisol Resendez, executive director of the El Milagro Clinic. “They will come to their senses, there are many people who are willing, they just don’t have the tools, the information and the resources,” he says.