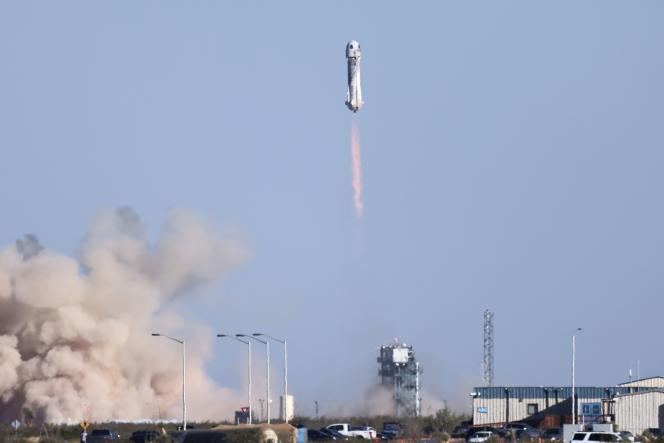 For the second time, a Blue Origin rocket successfully flew into space with passengers on board, Wednesday, October 13, from Texas, United States. The experiment lasted only eleven minutes. American billionaire Jeff Bezos, founder of Blue Origin, participated in the first flight, in July.

Symbolically, actor William Shatner, who played the famous Captain Kirk in the series Star Trek, this time was part of the trip. At 90, he became the oldest person to reach space and commented, upon his return, of having lived “The most intense experience” of his life.

The New Shepard rocket, fully automated and reusable, takes off vertically. It consists of a launcher and a capsule that detaches in flight. Thus propelled, it passed what is called the Karman Line, which marks, at an altitude of 100 kilometers, the conventional border of space.

Passengers can then detach themselves from their seats and float for a few moments in zero gravity. The capsule then fell back to Earth, braked by three parachutes and a thruster. Footage filmed by Blue Origin showed the passengers exiting the capsule and taking a few steps, greeted in the Texas desert by Mr. Bezos.

The launcher returned, for its part, to land automatically not far from its take-off location. Take-off was originally scheduled for 9 a.m. (4 p.m. in Paris), but was postponed by about thirty minutes after the countdown was suspended for final checks. The four passengers finally took off at 9:49 a.m.

A new stage in the space tourism war

Three other passengers were on board: Chris Boshuizen, a former NASA engineer and co-founder of Planet Labs, a company that photographs the Earth in high resolution using satellites; Glen de Vries, co-founder of Medidata Solutions, a company specializing in clinical trial tracking software for the pharmaceutical industry – both paid for the trip (the amount has not been released). Finally, Audrey Powers, a manager of Blue Origin responsible in particular for flight operations and maintenance of the rocket, completed the crew.

Less than three months after Mr. Bezos’ flight into space, this second flight shows his company’s determination to establish itself in the coveted space tourism sector. The competition is raging with Virgin Galactic, which offers a similar experience of a few minutes. In July, British billionaire Richard Branson also flew into space aboard a company ship he founded.

Article reserved for our subscribers Read also Elon Musk, his head in the stars

In September, the SpaceX group, Elon Musk, for its part sent four space tourists for three days in orbit around the Earth, a mission much more ambitious and expensive. Long led by state agencies, this conquest of space is now increasingly supported by private companies.

Pfizer vaccine 5-11 years, ok in the USA by FDA panel