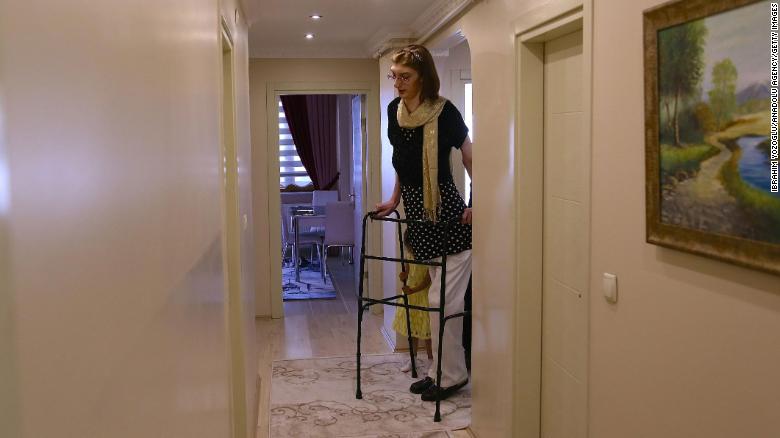 Look at the dog with the biggest ears in the world 2:10

(CNN) – A 24-year-old Turkish woman, measuring 215.16 centimeters, has been confirmed as the woman live tallest in the world by the Guinness World Records.

Rumeysa Gelgi’s outstanding stature is due to a condition called Weaver syndrome, which causes accelerated growth and other abnormalities, Guinness World Records said in a statement.

Both Gelgi and the tallest living man in the world come from Turkey. (Ibrahim Yozoglu / Anadolu Agency / Getty Images)

Gelgi was measured again this year after being named the tallest living teenager in the world in 2014, at age 18.

Due to his condition, Gelgi often travels in a wheelchair, but is able to use a walker for short periods.

Gelgi wants to use his platform to inform people about rare diseases like Weaver.

“Every disadvantage can become an advantage for you, so accept yourself for who you are, be aware of your potential and do your best,” he said in the statement.

Gelgi usually uses a wheelchair, but can walk with a walker for a short time.

Her height intrigues people when they see her, but most people are friendly and supportive, Gelgi told Guinness World Records.

“It is an honor to welcome Rumeysa to the record books. Her indomitable spirit and pride in standing out from the crowd are an inspiration,” said Craig Glenday, editor-in-chief of Guinness World Records, in the statement.

“The highest category of living woman is not a category that changes hands very often, so I am excited to share this news with the world,” he added.

The tallest living man in the world, Sultan Kösen, is also from Turkey and is 251 centimeters tall.

Guinness World Records said the fact that both the tallest living man and woman holding the record are from the same country is “a rare event.”

The last time it happened was in 2009, when Bao Xishun (236.1 centimeters) and Yao Defen (233.3 centimeters), from China, held the records. Gelgi snatched the record from Yao.

The tallest woman ever recorded was Zeng Jinlian from the Chinese province of Hunan, who was 246.3 cm tall at the time of her death in February 1982.

In August, Guinness World Records confirmed that Samantha Ramsdell of Connecticut now holds the record for the world’s largest mouth opening for a woman.

Woman with the largest mouth in the world, according to Guinness 1:34

Its open mouth measures 6.56 centimeters, that is, about 2.5 inches. When measured crosswise, it reaches more than 10 centimeters, or four inches.

Ramsdell is an avid TikTok user and her videos include one in which she shoves three donuts in her mouth, a step beyond her video fulfilling a request to eat two at once. It is also capable of filling in a large order of fries.

In Germany, MEPs return to a younger and diverse Bundestag