Marseille: The oriental hornet detected for the first time in France, the hunt is organized – 20 Minutes 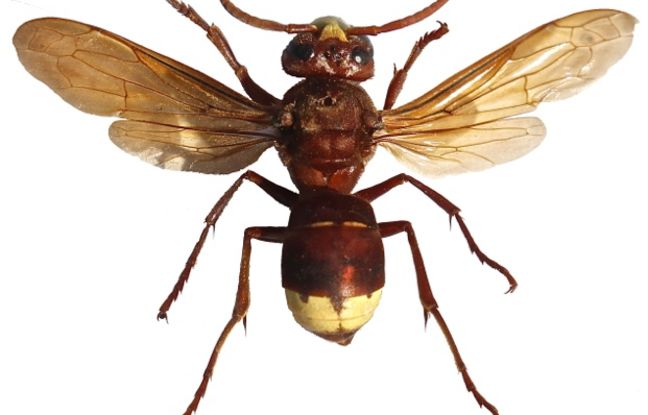 When Gérard Filippi and his two colleagues, Alain Coache and Bruno Gereys from the environmental consulting firm Ecotonia, were surveying an industrial wasteland in the 15th arrondissement of Paris at the end of summer. Marseilles, they did not expect such a find. Foraging on a flowering ivy, a stone’s throw from the Aygalades stream, a species of hornet observed by Gérard Filippi should not be there.

In entomologist seasoned – he has already given his name to a species of butterfly – it does not take long to identify it. Its characteristic yellow lower abdomen indicates it: it is an oriental hornet. It had never been detected in France until September 22. And as for its Asian cousin, this hornet native to the Balkans and Turkey is a devourer of
bees.

“No more dangerous for man than the others”

“Hornets, like wasps, forage for food. But to feed the larvae in the nests, they need protein, and that is why they attack bees, ”explains Gérard Filippi. Quickly, the Ecotonia team captured a few specimens and noted the presence of the three types of castes “queens, workers and males.” This indicates that they have established a colony, continues the entomologist. After capturing some, I got attacked by others, they are very aggressive. This hornet is not more dangerous for humans than other species, but it attacks like the others when the colony is threatened. “

The news of this arrival does not delight beekeepers, already in difficulty with the asian hornet. “This will surely be a further constraint for beekeepers,” thinks Pascal Jourdan, director of Adapi (Association for the development of beekeeping in Provence). However, the latter’s experience allowed the development of some control techniques. ” There is
trapping solutions, but it must be very massive to protect the hives and be effective ”, indicates the one who represents nearly 500
beekeepers.

Professional beekeepers also practice roaming, moving the hives to mid-mountain ranges between July 15 and October 15, a period in which hornets are very active. “But the problem is always to flee. Because it is all well and good to leave the bees longer at altitude, but it is riskier for them, and the game is still not worth the candle. The ideal would be that the administration manages to eradicate them, which had not been done in 2005 with the Asian hornet. “

Micro beacons and a reporting platform

Locating the nest in Marseille is what Gérard Filippi will try to do this Friday. “But the area is very crowded, almost impenetrable around the stream,” he continues. If this fails, a team from the National Museum of Natural History will descend from Paris next week. “We will then place microbeacons on captured specimens to find their nests. But the process is very expensive, around 200 euros each, explains Quentin Rome, an entomologist specializing in hornets and wasps at the Museum. We have also launched a call for reporting from the INPN (National Institute of Natural Heritage), in particular via the application. Everyone can participate. “

But isn’t it already too late? “In 2005, shortly after the first report of the Asian hornet, its presence was revealed in 13 other departments”, recalls Quentin Rome. In the case of the oriental, if it is not to be excluded that either presence is older, the chance could be to have detected it almost immediately and before the period of hibernation, at the end of which the queens go to found new colonies. “It could have arrived recently by a container unloaded in Marseille which transported fruit or wood, going up Aygalades stream flows into the port”, speculates Gérard Filippi to explain this arrival.

However, if this species were to succeed in establishing itself permanently, it should not colonize all of France. “The Eastern hornet prefers arid environments, unlike the Asian who prefers wetlands, says Quentin Rome. It is not surprising that it was first detected in France in Marseille. It is already present in Greece, Italy, North Africa, it poses a fairly significant problem for Israeli beekeepers ”. However, this preference for wetlands has a negative consequence. “We can therefore think that it will not be in competition with the Asian hornet”, continues the entomologist of the National Museum. And colonize spaces where the Asian hornet was until now little or not present.

One thought on “Marseille: The oriental hornet detected for the first time in France, the hunt is organized – 20 Minutes”