We went back a year, say data analysts: Cadca is on fire again, go to the hospital and don’t write nonsense! – Topky.sk 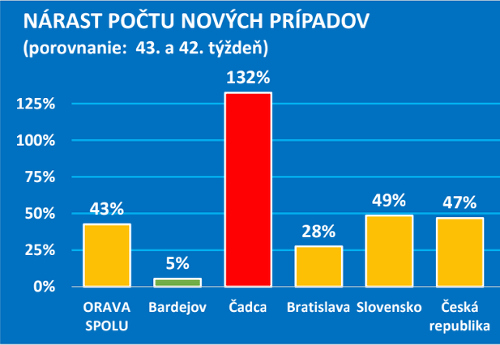 “How through a copier. For some, we do those graphs unnecessarily. We publish a graph from 2020 – it is a year old. It accurately describes the situation. It is symptomatic that the respiratory virus has hit the north of Slovakia, again districts with multigenerational houses, with great mobility for work and abroad, with a higher number of children in families., ” analysts from the Data without Pathos project pointed out.

Archive VIDEO There is a high level of community distribution of COVID in dozens of districts: Weddings and celebrations are the reason for the deteriorating situation.

According to them, many seniors in the region have fallen victim to the coronavirus. For this reason, according to analysts, people would think that they learned from this situation, because they experienced a large number of hospitalizations, funerals, in a short period they experienced a lot, when the possibility of vaccination came. However, they did not make full use of it.

“Instead of going to the vaccine, they go to a regional hospital with a cough and no oxygen. Čadca and Kysucké Nové Mesto had 125 and 42 positive yesterday. If the whole of Slovakia has such numbers, then NCZI reports today: 7500 positive. The reality is 2406. We have already written that it will be positive like wood and it is not primarily a problem, especially for children. ” the analysts stated that Čadca already has more than 50 patients with coronavirus in the hospital and 14 of them are either suffocating on the ICU or on artificial lung ventilation. As they pointed out, 50 patients from Čadca are 10 times more in the 90,000 district than in the Bratislava region.

Although they are the same, however, due to their size, Čadca is many times worse. “Throughout the region. Because Bratislava also has 50 patients from Senec and Pezinok and in Malacky there are 4. But the Bratislava region has mobility like 20 Čadcí and 10 Kysúc, borders with three countries, schools, factories and offices as densely as nowhere. 700 thousand inhabitants with permanent residence and another 1/4 million come here. That’s 10 CAPADS (in words: decimal), ” explained their concerns.

According to them, there is one aspect that helps Kysuciam fight coronavirus and hospitalizations. However, he is extremely sad. As they explained, today they do not have 100 patients in hospitals, because in the second wave they buried 30 percent of them and therefore they cannot die a second time. They also point out that those who have already been infected are unlikely to become infected a second time, as reinfections have been extremely rare, according to studies. They added that while 22 percent of seniors over the age of 50 are unvaccinated in Bratislava, it is almost half in Kysucie.

“The whole circus, the whole pandemic, all the restrictions, the news full of disasters, the talk that we can’t do it, the disputes over what it all causes are just-and-only because of the districts that are affected. But not by the number of positive cases. They will be like wood. It is also in Bratislava. But the circus is because of those districts because they have full hospitals there. 80% are unvaccinated, “ stated.

They pointed out that if people didn’t believe the numbers, they should go to the hospital and not write that nurses exchanged vaccinated and unvaccinated statistics, that hospitals earn coronavirus, and therefore report a large number of positive hospitalized patients, or that patients They did not have COVID and infected them except for the ARO, whether the tests are intentionally sold positively, and therefore report a lot of them.

“We don’t care what you do if you are under 50, because probabilities work for us and for you. But if you have someone over 50, over 60 or over 75 in your family, try to consider vaccinating this fellow citizen and avoid calling 122., “ they stated that in the first week of October they called an ambulance 500 times in the Prešov, Košice and Žilina regions and accepted all patients, while 75 of them would die according to current numbers. Next week, these calls will be doubled and for the whole of October 2,500. “Once again: it can be done, even in the affected hospitals, the capacity is filled to 30-50% (with the exception of Stará Ľubovňa, where today they have 25 patients and the maximum was 28 in the second wave). But it’s useless. It’s for old people how to swim without a vest, how to ski without their skis on, how to go on a motorcycle without a helmet or how to go on ice in ballerinas, “ concluded.

What if Brian Laundrie is not found in the next few weeks?

One thought on “We went back a year, say data analysts: Cadca is on fire again, go to the hospital and don’t write nonsense! – Topky.sk”