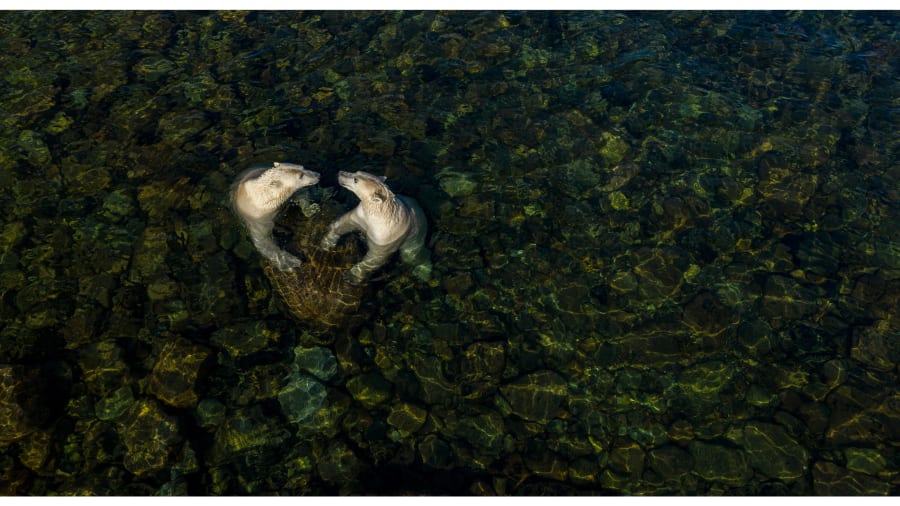 (CNN) – The winning images in the 2021 Wildlife Photographer of the Year competition were released after a record number of entries were submitted, with a riveting underwater shot taking home first prize.

Organized by the Natural History Museum in London, the 57th edition of the contest featured 50,000 entries from 95 countries vying for a prize, with shots ranging from a reindeer battle to a poisonous spider hidden under a bed.

French underwater photographer Laurent Ballesta was crowned Wildlife Photographer of the Year 2021 for his photo of camouflaged groupers emerging from their milky cloud of eggs and sperm in a biosphere reserve in Fakarava, French Polynesia.

Canadian-Slovak Martin Gregus won the “Rising Star Portfolio Award” for a shot of polar bears playing in the water. Martin Gregus / Wildlife Photographer of the Year

Ballesta returned to Fakarava Lagoon five years in a row to capture the annual spawning that takes place around the full moon in July. Camouflage groupers are a vulnerable species threatened by overfishing, the museum said in a press release Tuesday.

“In what could be a crucial year for the planet, with vital debates at COP15 and COP26, Laurent Ballesta’s Creation is a compelling reminder of what we can lose if we do not address humanity’s impact on our planet,” Doug Gurr, director of the Museum of Natural History, said in the statement.

Meanwhile, 10-year-old Indian photographer Vidyun R. Hebbar was awarded the Young Wildlife Photographer of the Year award for his image of a carp spider in its web, against the backdrop of an automated pedicab that pass.

The winners were announced in a total of 19 categories, and this year featured three additions: “Wetlands”, “Oceans” and “Natural Art”.

Other winning images included Kuwaiti photographer Majed Ali’s photo of a mountain gorilla basking in the rain, and a photo of fractured sea ice used as a birthing platform for seals, taken by American photographer Jennifer Hayes.

The 2022 Wildlife Photographer of the Year Contest begins on October 18.

Tragedy on the road in the district of Čadca: A young human life died out in a traffic accident – Topky.sk

One rejection after another. Newcastle United does not want to train Zidane or Conte – ŠPORT.sk