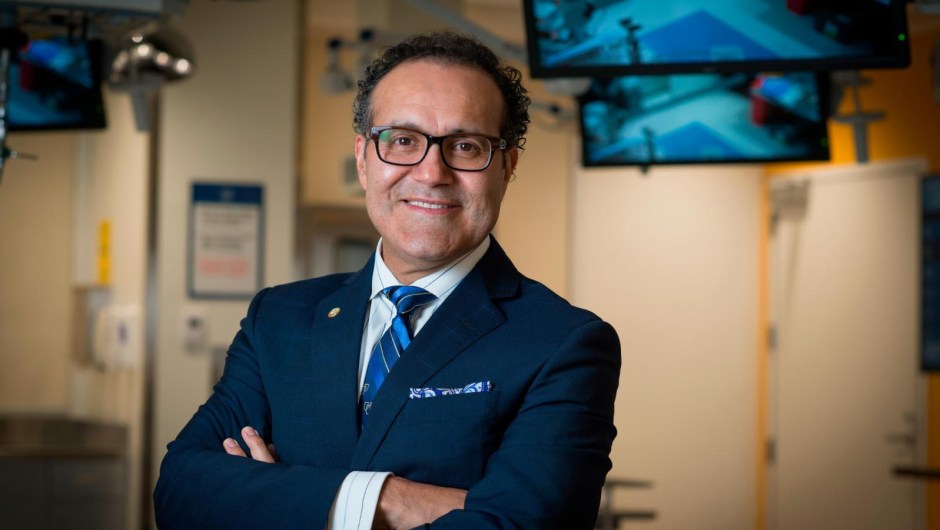 (CNN Spanish) – Dr. Alfredo Quiñones-Hinojosa, or Dr. Q, as his patients call him, is a benchmark in the field of neurobiology in the United States. But before dedicating himself as an academic and becoming an area chief at the Mayo Clinic in Jacksonville, Florida, he traveled a challenging road from having crossed the border irregularly from Mexico.

After several years of work as an agricultural gatherer and welder, he obtained a scholarship at the University of Berkeley and later graduated with honors from Harvard. He is an expert in awake brain operations and his story will be brought to the big screen by Brad Pitt’s producer.
In an interview “In Dialogue with Longobardi”, he recalled his difficult childhood and told how he applies what he learned in his different trades in the operating room. He also explained why we are “in a prehistoric stage” when it comes to understanding the brain and assured that he dreams of finding a cure for cancer.

Marcelo Longobardi: How much pain is there and how much hope is there in emigrating?

Dr. Quiñones-Hinojosa: I have never focused on the difficult moments, on the contrary, I have decided to focus on the battles, the achievements, the happy things that the world has given me. My country also gave them to me, despite having grown up in a humble place. Mexico did a lot for who I am now. Logically, the US opens doors. (…) This country has also been formed from the stories of migrants.

Marcelo Longobardi: A review of your life includes a healer grandmother and the loss of your little sister.

Dr. Quiñones-Hinojosa: My grandmother María was a humble woman with indigenous roots, a midwife and a healer. She saved many lives in ranches and agricultural areas, I feel very identified with her. The thing about my little sister was a very big blow that almost destroyed our lives, but at the same time it helped my parents keep the family together. I thank you for the example of honesty and for looking at the light when the rest of the world looks at darkness.

Marcelo Longobardi: After crossing the border you went through many jobs, what did you learn along the way?

Dr. Quiñones-Hinojosa: When he was a tomato picker in the field, he wanted to be the best in the history of that farm. When I was a welder, I wanted to become certified by the state of California. I remember using the same principles as in the operating room today. When I am welding blood vessels that want to get out of control, I use the same kind of meticulous movements (…) I think that those principles that I brought with me as a child and then when working since I was 19 in the US are the same as they have encouraged and prepared me to get to do what I do at the Mayo Clinic.

Marcelo Longobardi: How much does the science of the human brain know?

Dr. Quiñones-Hinojosa: Every year we continue to make discoveries of how cells move and migrate in the brain. But we are still at a very prehistoric stage when it comes to understanding the brain. We know that it is an organism with 100 trillion neurons, 160 trillion synapses. There are more synapses in your brain than there are stars in the galaxy. We have a universe of which we understand very little. I think that in the next 20 or 30 years, with the technology that we are acquiring now, by studying migratory neuronal cells or stem cells in adipose tissue, we are going to start opening little windows to understand it more fully. However, I sometimes estimate that we understand less than 1% of the brain.

How does malnutrition affect children’s brains? 1:15

Marcelo Longobardi: Brain development is very important in the early stages of life. How does it influence cases where there are malnutrition problems?

Dr. Quiñones-Hinojosa: You touched a very important point. Our brain continued to develop anatomically until we were 18, 19 or 20 years old and many people do not know it. In the process of adolescence we make a huge hormonal shift. The front part of our brain forms new connections. Each stage of life requires different types of nutrition. In the youngest ages, vitamins and a good diet are needed (…) For that reason, I think we have to conceive that poverty is not only affecting us economically, but also in the way in which the brain is developing in millions of Humans.

The tough fight against cancer

Dr. Q says that one of his biggest dreams is to find a cure for cancer and remarks how a dramatic increase in cancer has been seen globally.

Dr. Quiñones-Hinojosa: I just published an article in the Mayo Clinic Proceedings magazine, in which we realize that in the last three or four decades the number of human beings with cancer has continued to increase incredibly fast. It is estimated to be the most significant cause of death in the US by 2025 and in the rest of the world by 2030. The problem, for example, for me, treating a patient with brain cancer requires a stratospheric amount of resources. Cancer is very expensive and we do not have the tools, we have not invented them. It’s another reason I keep trying to invent cures for the disease and make them available to the rest of the world. That not only those who have can obtain these cures.

Why is brain cancer so difficult to treat? 1:41

Editor’s note: The program “In dialogue with Longobardi” can be seen every Sunday at 9 pm in Miami (10 pm in Buenos Aires) on the CNN en Español screen. Also, their shows can be heard on various platforms.

1 thought on “From irregular border crossing to head of US neurosurgeons: the incredible story of Dr. Q that Brad Pitt will take to the movies”