WINTER IS HERE! The first snow has fallen in Slovakia: Clear words of meteorologists, get ready for this – Topky.sk 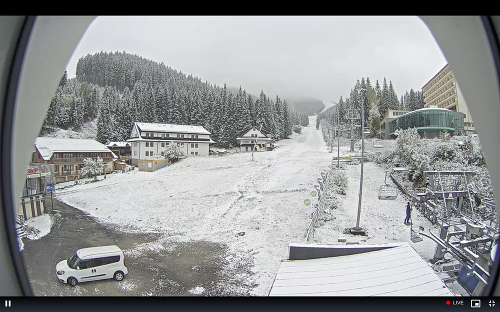 Meteorologists warned us last week that it should snow. And their words were fulfilled – in positions above 1200 meters it snowed. This means that not only the peaks of the Tatras are white, but also the villages and towns below our mountains. According to the portal imeteo.sk it snowed, for example, in Tatranská Lomnica, but also in the vicinity of Kubínská hola in Orava or in Vyšné Hágy, and snow also flew around Prešov.

“ORAVA – and we have the first snow this year on Kubínská. Shot from the upper part of Kubínská, today at 9 am, temperature – 2 degrees Celsius, “ wrote in the group ORAVA – I am a reporter on a social network. Along with the information, they also attached a photograph – it had already occurred to so much snow that the locals could build a snowman.

In addition, it snowed in the Low Tatras – white in Jasná. According to the current weather, it is two degrees below zero in popular ski destinations. However, Snow has not yet said its last word this week. It is still snowing all day, night and even tomorrow. The night will also bring with it more intense rainfall. According to the portal, the snowfall will also fall – to 700 meters above sea level.

The Slovak Hydrometeorological Institute also issued first-level warnings in connection with snow. These apply to the entire Žilina region and also to the districts of Poprad, Banská Bystrica, Brezno and Prievidza. At positions above 900 meters, one to four centimeters of snow can fall. “The stated amount of new snow poses a potential danger to human activities, transport and the movement of persons,” meteorologists warn. Alerts are preliminarily valid until 20:00.

The police also informed that it was snowing, especially in the north of Slovakia. “And here it is! Slovakia is covered with the first snow: That winter would come?” wrote on social network.

This is not the first snow

However, this is not the first snow that our mountains have experienced since the summer. The first snow fell on the penultimate day of August. At that time, up to 19 centimeters of snow fell on Lomnický štít. In addition, at the end of September it snowed in the Low Tatras, where it snowed 7 centimeters of snow on Chopok, but it did not have a long life. You could read more HERE.

One thought on “WINTER IS HERE! The first snow has fallen in Slovakia: Clear words of meteorologists, get ready for this – Topky.sk”