Covid-19: the NBA pushes for vaccination, the refractory Irving suspended by the Nets 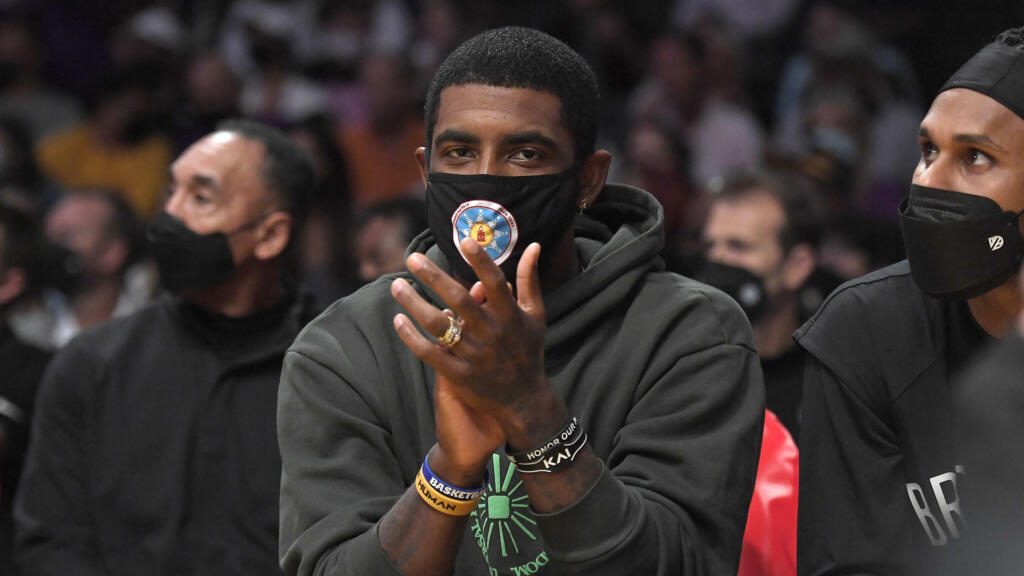 The American Professional Basketball League, the NBA, is pushing its players by all means to be vaccinated against Covid-19. Recalcitrant; Brooklyn Nets point guard Kyrie Irving has just been suspended by his club until he complies with the injunction.

The life of vaccine-skeptics is complicated in the NBA and Kyrie Irving bears the brunt. Pushed to get vaccinated, and thus be allowed to play at home, the Brooklyn basketball player was dismissed by his club on Tuesday, October 12. He is no longer allowed to train or play until he has consented to receive the injections for Covid-19.

The Brooklyn Nets point guard has been in the hot seat since New York City introduced new health safety protocols preventing unvaccinated adults from taking part in training or matches.

“Kyrie has made a personal choice and we respect that choice,” Sean Marks, the club’s general manager, said in a statement, but cautioned, “We will not allow any member of our team to be only partially available. “

“Our goal to be crowned champions this season remains unchanged and to achieve it, each member (…) must push in the same direction”, summarizes Sean Marks.

In the NBA, 5% of recalcitrant

The announcement represents the culmination of the conflict between the NBA and the approximately 5% of players refusing immunization against Covid-19.

>> Covid-19: in the face of vaccination, the reluctance of high-level athletes

It comes as New York City Hall had yet decided on Friday to allow Irving to train in the franchise’s facilities, considered private and not public.

The League, which initially considered making vaccination compulsory, finally gave up when the players’ union (NBPA) refused at a meeting held in August.

Since then, the authorities of American basketball have used other means, in particular an extremely strict health protocol for the non-vaccinated (daily tests, meals alone, very limited outings and interactions), who are gradually being convinced.

A protocol approved by Michael Jordan himself.

“Are you concerned with the NBA’s COVID protocols?”

Michael Jordan – “Not at all. I am total in unison with the league. Everybody’s been speaking about the vaccinations & I’m a firm believer in science & I’m going to stick with that.”

“I am in unison with the League. Everyone has given their opinion on vaccines. I firmly believe in science,” he said in an interview on the American channel NBC. “I’m going to stick to that, and I hope everyone follows the rules.”

Wiggins and LeBron James have caved in

Andrew Wiggins, a vaccine-recalcitrant winger for the San Francisco-based franchise Golden State Warriors, which has restrictions similar to New York’s, has finally been vaccinated, his club announced in early October.

The Lakers superstar LeBron James, a time “very skeptical”, also received his doses, however refusing to call for vaccination. “I don’t think I should get involved in what people do for their bodies,” he said at the end of September.

Calls for compulsory vaccination are flooding in, however, such as that expressed vehemently by Kareem Abdul-Jabbar, basketball legend, saying that “a player should imperatively submit to it otherwise he would have to be withdrawn from the team”.

A complicated start to the season in sight?

Advice followed by the Brooklyn Nets. At the risk of depriving himself of Kyrie Irving for the start of the NBA season, which opens with a shock between his team and the Milwaukee Bucks, defending champions, if he does not regularize his situation by then. The club can still count on its two other stars, James Harden and Kevin Durant.

And if Irving persists, he’ll be missing the entire season, along with millions of dollars in salary – a whopping $ 380,000 per game, according to sports channel ESPN.

Nets general manager Sean Marks, however, clarified at a press conference following the announcement Tuesday that only Kyrie Irving’s home match income would be withheld by the club. Away matches will be well paid to him.

The leader of the Brooklyn Nets, who had not officially reacted Tuesday, said at the end of September that he wanted to avoid “causing more distractions and more mess” for his team.

The one who refuses to confirm his vaccination status, which he wishes to keep “in the private sphere”, cracked a tweet on Saturday: “I am protected by God and my loved ones are too. We are together. ” Protection that the Nets apparently deemed insufficient.

The legendary Trnava disco, about which Ego also sings, has been operating without approval for 25 years – Aktuality.sk

One thought on “Covid-19: the NBA pushes for vaccination, the refractory Irving suspended by the Nets”