Both the coalition and the president are calling on Kazimir to resign. Fico: He would be crazy to do that – PRAVDA.sk 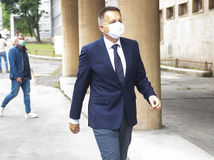 President Zuzana Čaputová stated that if she were in a situation as the Governor of the National Bank of Slovakia and former Minister of Finance Peter Kažimír, she would very seriously consider resigning from the position for the protection of the name of the institution she now represents. However, she added that she respects the presumption of innocence and the guilt must be decided by a court.

“It simply came to our notice then. What has been happening in Slovakia in recent months is a very important cleansing and correction in the right direction. I am not just talking about dozens of defendants, but also that more than 20 people have already admitted to committing corruption in the past. It is a necessary process that must continue, “the president said.

He will deal with a possible proposal to remove Kazimierz from office when he is on the table. “Legal reasons must be met, it is, of course, at the suggestion of the government and after approval by the parliament, I am only at the end of the chain,” Čaputová remarked.

Read more Petr Kažimír was accused of corruption. The NBS governor and ex-finance minister do not feel guilty

He added that Kazimir is “irrevocable” in his position. “It must be about his free choice in this situation, because you have no way to solve it, given that he has immunity as the governor of the national bank,” he added.

Deputy Prime Minister and Minister for Investment, Regional Development and Informatization Veronika Remišová (For the People) thinks that Peter Kažimír should take an example from the Austrian office of Sebastian Kurz and resign.

“I think Mr. Kazimir should resign himself. We have seen it with all officials, nominees of Smer, whether it was a special prosecutor, the head of the financial administration and other officials, “the minister remarked, adding that it is inappropriate for someone to be accused at the head of an institution.

“You can’t have an NBS governor suspected of carrying bribes,” she added. She urged him to resign, at least until the whole case was investigated and the court ruled on guilt or innocence.

When asked whether Remišová will initiate the dismissal of Kažimír if she does not resign, the minister replied that dismissing the governor of the National Bank is extremely difficult, if not impossible, under current legislation. “Therefore, I call on Mr. Kažimír to take the example of the Austrian office of Kurz, who simply resigned from his position on suspicion.

The SaS party called on Petr Kažimír to take personal responsibility and resign. “It is not a question of Peter Kažimír still not explaining the origin of his property, but of bringing an accusation against him, which ultimately means damaging the reputation of the whole of Slovakia,” SaS stated.

She pointed out that the Governor of the NBS is also a member of the Governing Council of the European Central Bank, and thus represents the country. “Therefore, such an accusation can in no way inspire confidence in our partners,” the party added. 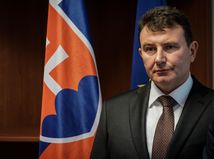 Read more Imrecze mentioned Pellegrini in his statement. You should have asked for a commission of 150,000 euros

According to the chairman of the opposition Smer, Robert Fico, Kažimír would be crazy if he resigned from the position of governor of the National Bank of Slovakia. According to him, Kažimír’s accusation is a fictional story. Fico further emphasized that Smer had denied the allegation for the evidentiary situation. In this context, he asks why the testimony of one informant who is accused or in custody is enough to charge other people.

“Peter Kažimír is the last person to whom I should say a few positive words. He stood behind the betrayal in the Direction more than anyone else. He is a politician who just took office in the party and then betrayed and fled. However, I have to stand up for him in this matter, because I know him, and the accusation against him is stupid, “Fico said, adding that criminal cases arising from the Office of the Special Prosecutor’s Office are ridiculous and charm-free.

Former Prime Minister and leader of the non-parliamentary Voice Peter Pellegrini claims that the presumption of innocence also applies to the accusation of Petr Kažimír, and that the accusation does not prevent him from performing his duties. According to him, it is necessary to wait whether it turns out to be a real and not a fabricated accusation.

“Kazimir is accused, but the presumption of innocence applies. I do not think that this prevents him from continuing to hold the position of NBS Governor until a final decision is made. I trust him, as well as his statements that nothing like this happened, “Pellegrini stated, adding that his accusation is based only on the statement of one person. He noted that in the current situation in the police and suspicions of manipulating the investigation, he would remain in office at Kažimír’s place.

From an international perspective, Pellegrini said that Kazimir was in regular contact with the head of the European Central Bank, Christine Lagard. According to him, she certainly knows about the current case. “It is up to the two of them to agree not to discredit the ECB,” he said.

However, if we want to compare ourselves with advanced democracies, according to Pellegrini, it should be recalled, for example, that even after plagiarism cases, the current representatives of the government remained in office. He talks about lowering the political level. According to him, the top government should have set an example.

Kazimir faces charges of bribery. He announced that he would file a complaint against him. The former finance minister claims that he “does not feel guilty of any crime” and at the same time, according to him, the factual situation in the resolution is untrue and the substantive evidence itself is lacking. 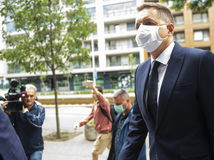 One thought on “Both the coalition and the president are calling on Kazimir to resign. Fico: He would be crazy to do that – PRAVDA.sk”