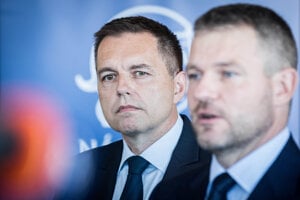 Kazimir is accused of bribery.

BRATISLAVA. Governor of the National Bank of Slovakia and former Minister of Finance Peter Kažimír and his defense will file a complaint against the charge of bribery within the statutory time limit.

This was stated for TASR on Wednesday by his lawyer Ondrej Mularčík.

“She should decide on the complaint Prosecutor General ‘s Office SR, “the lawyer explained. The complaint will be filed in the coming days.

Related article Will it lose its function? What the accusation means to Kazimira Read

The resolution on the accusation was delivered to Kazimir on Tuesday.

“He is accused of the crime of bribery and we will file a complaint against the accusation,” Mularčík specified on Tuesday, adding that he cannot provide more information.

According to the aktuality.sk portal, the accusation was filed by the Office of the Special Prosecutor’s Office. It is to be related to a bribe for the then head of the financial administration, Francis I.

Neither the prosecutor’s office nor the police have confirmed the information yet. Kazimir denies the accusation, he does not feel guilty of any crime.

Eight victims of coronavirus were added, every fourth PCR test was positive – TVNOVINY.sk

One thought on “Mularčík: We will file a complaint against Kažimír’s accusation within the legal deadline – SME.sk”