With the France 2030 plan, Emmanuel Macron hopes to pose as an “anti-declinist” – archyde 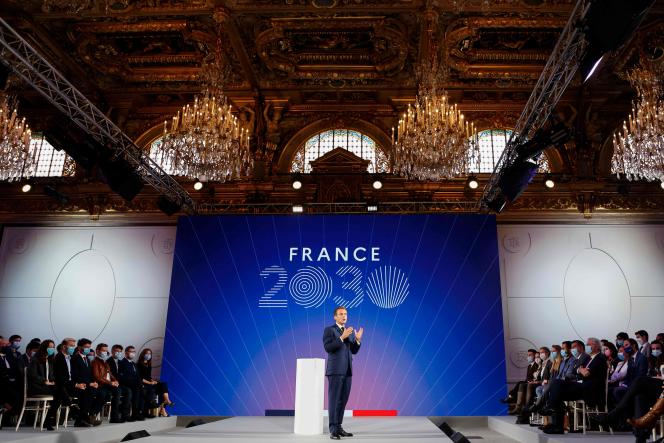 It is a cherished time of all ” declinists “. That of France before. That of the “glorious thirties” and full employment. That of De Gaulle and Pompidou. That of an offensive France on the international scene, endowed with futuristic projects.

Is it this France fantasized by some of the contenders for the 2022 presidential election that Emmanuel Macron intends to resuscitate by 2030 by unearthing, as he announced, the successors of the “Concorde, TGV and nuclear reactors” ?

By unveiling, Tuesday, October 12, a investment plan of just over 30 billion euros so that France becomes again “ a great nation of innovations ” industrial, medical and agricultural sectors able to identify “Projects that we do not yet know”, the head of state set the scene. Hope is allowed, but for “Take back in hand the destiny of France and Europe” and “Defend the humanism in which we believe (…), you must not have any nostalgia ”, he hammered.

The message could betray a certain presidential feverishness. Emmanuel Macron, whose victory in 2017 was also to sign that of “Joyful passions” he was defending “For freedom, Europe, knowledge, the universal”, has he been overtaken by French defeatism?

“Some think that our country is in decline, that the worst is yet to come, that our civilization is fading”, he denounced in his programmatic book Revolution (XO Editions, 2016), refusing to ” to resign “. Five years later, the momentum that the Head of State thought to instill has not taken. Or not enough.

According to the “French Fractures” survey produced by Ipsos Sopra-Steria for The world, disclosed in September, 75% of French respondents think the country is in decline.

The political-media success of the far-right polemicist, Eric Zemmour, potential candidate for the 2022 poll and champion of declinism, is a cruel illustration of this so French inclination. “Eric Zemmour does not seduce with his gloomy speech, but because he makes an observation that part of the population has shared for a long time. Sharing a diagnosis on the state of the country is the first step to seduce the voter ”, observes Jérôme Fourquet, director of the opinions division of the IFOP polling institute and co-author of France before our eyes (Editions du Seuil).

The idea of ​​a “falling France”, to use the title of the book by economist Nicolas Baverez, published in 2003, is not new. But the pandemic caused by the coronavirus has given new arguments to those who are alarmed at the country’s downgrading.

You have 65.28% of this article to read. The rest is for subscribers only.

One thought on “With the France 2030 plan, Emmanuel Macron hopes to pose as an “anti-declinist” – archyde”