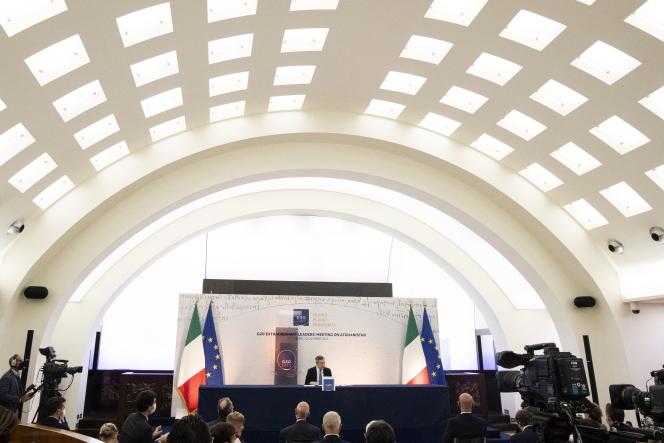 The Afghan Taliban met for the first time a joint delegation of the United States and the European Union (EU), Tuesday, October 12, in Doha, the capital of Qatar, the same day that the leaders of the G20 committed to working together to avert a humanitarian catastrophe in Afghanistan.

Direct talks in Doha between representatives of the Taliban, the United States, Canada, the EU and several European countries – including France, Germany and the United Kingdom – were facilitated by Qatar, a country close to the Taliban. They should “Allow the United States and Europeans to tackle problems” such as freedom of movement for those wishing to leave Afghanistan, access to humanitarian aid and women’s rights, according to EU spokesperson Nabila Massrali.

At the opening of the G20 summit, the EU pledged € 1 billion, part of which is intended for urgent humanitarian needs and for Afghanistan’s neighbors who had welcomed the Afghans fleeing the Taliban after the seizure of power. the latter, mid-August.

Faced with a paralyzed economy and the looming serious humanitarian crisis, these radical Islamists are seeking international support, although their regime has not yet been recognized by any country.

“Specialized aid for vaccinations, accommodation, as well as the protection of civilians and human rights” is also planned, said Mme Massrali. “We must do everything in our power to avoid a major humanitarian and socio-economic collapse in Afghanistan”, said European Commission President Ursula von der Leyen.

G20 leaders reaffirmed their pledge to bring humanitarian aid to Kabul, while recalling that they remained “Extremely concentrated” on the fight against terrorism, Washington said. The Taliban regime itself faces the threat of the jihadist organization Islamic State, which has carried out a series of deadly attacks in Afghanistan in recent months.

The head of the Italian government, Mario Draghi, stressed that the G20 was considering “A general mandate” to the United Nations (UN) to oversee the international response to the socio-economic problems of Afghanistan. But according to him it is still ” early “ for recognition of the Taliban regime although a “Kind of implication” their part would be needed to provide aid to their country.

France has shown itself “Worried about the economic isolation of the country” and his “600,000 displaced”, factors that may have a “Destabilizing effect”.

“Interact” with the Taliban

Ahead of the Doha talks, the head of European diplomacy, Josep Borrell, had said that the EU was above all seeking to prevent a “Collapse” from Afghanistan. “We can’t just watch and wait. We need to act, and quickly. “

Article reserved for our subscribers Read also In Afghanistan, after the return of the Taliban, the uncertain future of female doctors

“There is a difference between a pragmatic, practical dialogue on our major national interests which are for us counterterrorism, freedom of movement, human rights”, and “Any sort of recognition or legitimation of the Taliban”, also warned, Tuesday, in Washington the spokesman for American diplomacy Ned Price, while welcoming meetings “Positive” and “Productive”.

During the weekend in Doha, the Taliban had already met American officials, first face to face since the seizure of power in Kabul. Their foreign minister, Amir Khan Muttaqi, then called on the United States to establish ” good relations “ and not “Weaken the current Afghan government”.

The Taliban’s takeover of power is a “Reality that we must take into account. The most important thing now is to interact with them ”said Mutlaq Al-Qahtani, Qatar’s special envoy for Afghanistan, dodging a question about whether his country would recognize the Taliban regime.