Escape for freedom, from China to Taiwan in a rowboat 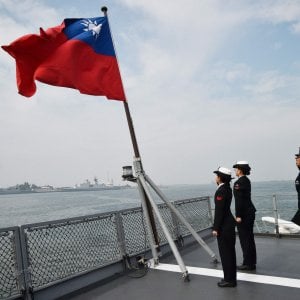 TAIPEI – On a small dinghy in search of “freedom and democracy”. This would be the story of the incredible journey of a Chinese who landed in Taiwan after having managed to cross the Strait, 160 km super patrolled. He told the police, says the BBC, that he left in search of “freedom and democracy” and the authorities on the island, which Beijing considers a ‘rebel province’, are investigating how the journey of the man, identified only with the surname Zhou. US Admiral in the Pacific: Taiwan risks Chinese invasion within 6 years March 10, 2021

It is intercepted on Friday evening near the port of Taichung, the Washington Post wrote, after departing from the Chinese province of Fujian, in a small inflatable boat with an outboard motor purchased on the internet and a refueling of 90 liters of gasoline, according to the reported story. by the Taiwanese authorities. The journey would take more than ten hours. Now 35-year-old Zhou is in a detention center in Taichung, with the risk – according to the newspaper – of a three-year prison sentence and a fine, as well as repatriation. According to the Coast Guard, it is in “good condition” and is complying with a 14-day quarantine period. In a video, reports the Post, the police officers of the port of Taichung question Zhou, who says that “Taiwan is more freedom and equality”. Beijing sends 25 fighters and bombers into Taiwanese airspace April 13, 2021

The island, the Guardian points out, does not have a formal procedure for asylum seekers, but evaluates it on a case-by-case basis. Zhou’s incredible story is reminiscent of what turned into a nightmare for 12 Hong Kong citizens who were stopped at sea by the Chinese last August while attempting to flee to Taiwan. Between 2008 and 2020, the Post writes, citing data from the island’s authorities, more than 400 Chinese citizens were arrested for illegally entering Taiwan. Arguments

Celeste is injured, Andréa fired and Jules in competition with Nordine – Tomorrow belongs to us episode 1107 of January 25, 2022 – Nouvelletes-Tele.com