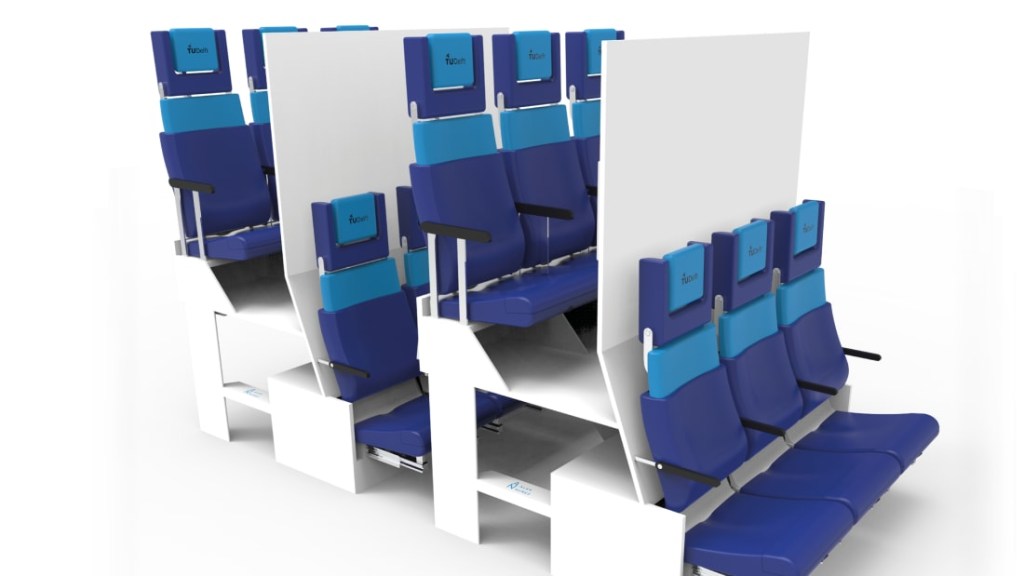 Check out this plane with two-tier seats 1:00

(CNN) – Aircraft seat designers have long come up with innovative concepts for affordable cabins, seeking the ideal balance between accommodating as many passengers as possible and maintaining a relatively pleasant experience for them.And though the plane seats that have been standing under consideration in recent years they have not yet seen the light, and the revision of airplane seats that seemed to be on the horizon last year in the wake of the pandemic never materialized, there are still many designers working to revolutionize the aircraft cabin.

Always on the lookout for the latest updates and innovations, Crystal Cabin Awards They are known for highlighting new trends in aircraft interiors.

After the pandemic delayed the announcement of the 2020 award winners, this year the Crystal Cabin Awards have narrowed down their usual eight categories to two key awards that recognize where aviation is at right now: the judges’ choice category and the clean and safe air travel award.

From stretching your legs in the lower section of a cabin with multi-level economy seating to snuggling into a compartment built into the overhead compartments, the nominees offer a glimpse into the future potential of flying.

One of the most intriguing concepts on the shortlist is the Chaise Longue economy seating project, which raises a double-level seating cabin, with each row alternating between floor seats and raised seats a few feet off the ground.

Double level: The Chaise Longue has been in the making for a long time, but Núñez Vicente believes that it would work well after the covid-19. “As it gives more space between passengers and places them at different heights, it is more suitable for flights in times of pandemic,” he tells CNN Travel.

The design is attributed to the 21-year-old student Alejandro Núñez Vicente, who hails from Spain but studies at TU Delft University in the Netherlands. Núñez Vicente tells CNN Travel that his experience traveling through Europe in economy class served in part as an inspiration for the idea.

Fed up with the lack of legroom, he realized that raising the front row of seats would solve the problem. Its design eliminates the upper luggage compartment, allowing more space in the cabin for the upper seats. Instead, luggage is stored in compartments under the seat.

Núñez Vicente believes that this design would work well on the Flying-V aircraft, which is currently being developed at the Technical University of Delft, but says it could also be applied on a Boeing 747, an Airbus A330 or any other medium or large aircraft. .

Núñez Vicente says that he took ideas that were already being discussed by the team working on the Flying-V project and contributed his own vision.

The goal was to create a multi-level cabin experience that offered something attractive to travelers seated on both levels.

“The lower row has the advantage that passengers have the experience of being on a sofa stretching their legs, while the upper row offers an SUV experience, making it possible, for example, to cross the legs due to the greater legroom available and in general ”, says Núñez Vicente.

The seat design also offers more recline angles, as well as an adjustable backrest and a fold-out cervical support, for more comfort.

“The current economy class is usually limited to a single or slightly reclined position that prevents the user from having a comfortable and relaxing flight experience,” says Núñez Vicente.

Unexpected space: The idea of ​​the design is to create more space for the passengers and, at the same time, allow multiple seats to function. “The bottom row has the advantage that passengers have the experience of a sofa when stretching their legs, while the top row provides an SUV experience, making it possible, for example, to cross the legs due to the increased legroom and in general, ”says Núñez Vicente.

The concept was already thought out before the pandemic, but Núñez Vicente believes that the design adapts to the current climate.

“As it gives more space between passengers, and places them at different heights, it is more suitable for flights in times of pandemic,” he says. In addition, the seat parts are designed to be easily moved, making it possible to convert a commercial aircraft to a cargo one.

Núñez Vicente is now working to bring the design to life in collaboration with his professors at the Technical University of Delft, Dr. Peter Vink and Dr. Wolf Song. The next step is the design of demonstrable prototypes.

“For now, this is an internal university project, led by students, which has not yet been formally presented to the airlines. However, some companies in the aerospace sector have already shown their interest in the Chaise Longue Economic Seat project, which presents possible possibilities for future collaborations, ”says Núñez Vicente.

In the clouds: Toyota Boshoku’s CLOUD CAPSULE concept is also nominated for jury awards. According to a statement from the Japanese company, the design hopes to “make economy class travel safer, more enjoyable and more comfortable, while creating more revenue opportunities for airlines.”

The Chaise Longue isn’t the only design to offer a double-deck seating configuration that has been recognized by this year’s Crystal Cabin awards.

Toyota Boshoku’s CLOUD CAPSULE concept is also on the shortlist as it envisions the area above the economy seat as additional space that passengers can withdraw to once the aircraft reaches cruising altitude.

According to a statement from the Japanese company, the design should “make economy class travel safer, more enjoyable and comfortable, while creating more revenue opportunities for airlines.”

The idea is that passengers can buy a normal economy seat ticket and then, as a complement, acquire access to CLOUD CAPSULE, which Toyota Boshoku calls “a multipurpose room that equals the experience of a business class seat.”

Offering unexpected privacy in the crowded economy cabin, the capsule could also have its own heating and air conditioning settings.

Greater privacy: The idea is for the passenger to buy an economy class ticket and then, as a complement, acquire access to CLOUD CAPSULE to enjoy a private space integrated into the upper compartment area to work, relax or sleep.

Another of the jury’s award nominees seeking to reimagine economy class, though not adding another level to the cabin, is Interspace, a seat design idea from Universal Movement, a spin-off from London-based design company New Territory.

The seat is intended to facilitate sleep for economy class passengers, through padded wings that unfold on both sides of the seat back, allowing greater privacy and a padded place to rest the head.

CNN Travel tested the seat when it debuted at the Aircraft Cabin Innovation summit in December 2019, commenting on the privacy and comfort it offers.

Universal Movement is now working with Safran Seats to bring the concept to life.

The design caught the attention of the 27 Crystal Cabin Awards judges because it could be adapted to an existing aircraft cabin.

For its part, the clean and safe air travel category recognizes designs such as Boeing’s ultraviolet disinfection wand, which worked in collaboration with companies such as Etihad Airways to devise a “portable magic wand” that could clean the cabin. of an airplane.

“Of course, the likelihood that, for example, double-deck seats and capsules will really gain momentum in the next few years is still slim,” says Kaestner. “But we must not underestimate the trend and agenda-setting ability of such concepts for aviation as an industry.”

The full list of nominees for this year’s Crystal Cabin Awards can be found consult here, and the winners are expected to be announced at this year’s Aircraft Interiors Expo, to be held virtually in September 2021.